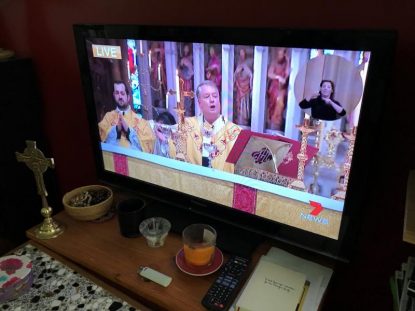 Archbishop Anthony Fisher of Sydney is seen on national television as he celebrates Easter Mass via livestream April 12, 2020, in St. Mary’s Cathedral during the coronavirus pandemic. (CNS photo/Peter Rosengren, The Catholic Weekly)

SYDNEY (CNS) — The recent response of two parents to the deaths of three of their children and a niece illustrated what Easter is about, said Sydney Archbishop Anthony Fisher.

The response “was a superhuman one, a supernatural one, an Easter one,” Archbishop Fisher said in his Easter homily April 12.

The congregation was limited to 10 people because of the COVID-19 pandemic, but the parents — Leila Adbdallah and her husband Danny — were among them. Leila Adbdallah read from St. Paul’s letter to the Colossians during the Mass, which was broadcast and livestreamed around the nation by the Channel 7 Australian commercial television network.

“This is not a family of superheroes or saints: These are ordinary people who, by God’s grace, could do extraordinary things in the most terrible of circumstances,” Archbishop Fisher said.

On Feb. 1, the four children were killed by a car driven by an alleged drunk driver, which mounted the curb as they were walking home after buying ice cream.

Speaking to media just days after the deaths, Leila Abdallah said the couple forgave the driver of the vehicle and that they believed their children were in heaven.

Archbishop Fisher said Christian faith in the resurrection is what gives confidence that the children, Anthony, Angelina and Sienna Adbdallah and Veronique Sakr, “have been brought back to life with Christ, and that enables us to let go of earthly thoughts like anger and revenge, self-protection and the rest, and dwell instead on heavenly things like peace and love, and the glory our young ones now share with Jesus.”

The archbishop told families across the nation that Christ’s resurrection remains just as relevant as ever in an age dominated by science, technology, affluence and education, big government and media.

It’s precisely to address the sickness of sin that Jesus died and rose, as well as to address sin’s triumph in death, he said.

But while medical science could address a crisis such as the current coronavirus pandemic, people everywhere still wonder if there is such a thing as life after death. Meanwhile, the deep-seated moral, intellectual and emotional problems of human existence remain and are “far more resistant to cure,” he said.

And while the COVID-19 crisis eventually will pass, it is up to everyone to ensure that the “new normal” that Australia will arrive at “is a better normal, more just and compassionate, more hopeful and caring.”

“And the Easter season which begins today and extends to the end of time proclaims loud and clear by whom we are saved: Jesus Christ, our sure and certain hope of the resurrection.”

Before Communion, Archbishop Fisher invited all those watching to make a spiritual Communion. He included those who had planned to become members of the Catholic Church at Easter and had been looking forward to receiving the Eucharist for the first time.

NEXT: Migrant ministries call for end to deportations during pandemic