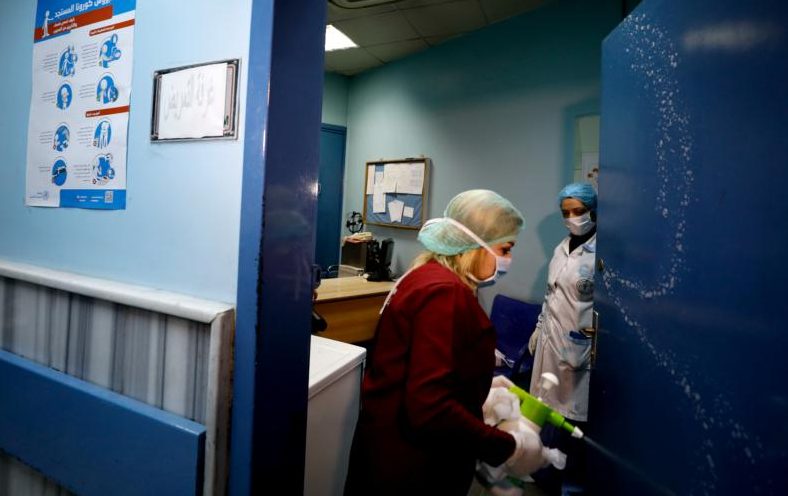 A worker sanitizes a door at a hospital to prevent the spread of COVID-19 in Damascus, Syria, March 19, 2020. In the name of Pope Francis, the Congregation for Eastern Churches said it is sending 10 ventilators to Syria and three to St. Joseph's Hospital in Jerusalem to respond to the pandemic. (CNS photo/Omar Sanadiki, Reuters)

VATICAN CITY (CNS) — In the name of Pope Francis, the Congregation for Eastern Churches said it is sending 10 ventilators to Syria and three to St. Joseph’s Hospital in Jerusalem to respond to the coronavirus pandemic.

The donations were among the first items announced by the congregation as it launched an emergency fund in response to the pandemic.

The congregation’s announcement April 18 said the 10 ventilators sent to Syria would be shared by three hospitals run by Catholic orders of women religious: the Salesians in Damascus, the Sisters of St. Joseph of the Apparition in Aleppo and the Daughters of Charity of St. Vincent de Paul in Damascus.

In addition to the ventilators for the Jerusalem hospital — also run by the Sisters of St. Joseph of the Apparition — the congregation said it would purchase and supply diagnostic kits for people in Gaza and would make an “extraordinary contribution” to Holy Family Hospital in Bethlehem, West Bank, which specializes in maternity and neonatal critical care.

The Congregation for Eastern Churches supports the Eastern Catholic churches throughout the world and also looks after the needs of Catholics of all rites in Egypt, Eritrea and northern Ethiopia, southern Albania and Bulgaria, Cyprus, Greece, Iran, Iraq, Lebanon, Palestine, Syria, Jordan and Turkey.

The emergency fund, the congregation said, is a response to the invitation of Pope Francis “not to abandon the suffering, especially the poorest, in facing the global crisis caused by the COVID-19 pandemic” and would work with the pandemic-response commission the pope asked the Dicastery for Promoting Integral Human Development to coordinate.

The fund will operate “thanks to the active collaboration of the Catholic Near East Welfare Association (CNEWA) and the Pontifical Mission for Palestine,” the statement said. Both organizations are based in New York and have offices in Canada.

CNEWA — with its operating vehicle in the Middle East, the Pontifical Mission — is an agency of the Holy See specifically founded by Pope Pius XI to support the churches and peoples under the jurisdiction of the Congregation for Eastern Churches.

CNEWA works with many partners, but its primary collaborator is the congregation, “which has moved quickly in responding to Pope Francis’ call not to abandon the suffering, especially the poorest, as they confront this global pandemic. CNEWA is deeply committed to supporting this emergency effort of the Holy Father,” it said in an April 20 statement.

The Congregation for Eastern Churches said some of the relief efforts also will be paid for using funds from the annual Good Friday collection for the Holy Land, which has been postponed this year to Sept. 13.

At the same time, it said, “despite the economic uncertainty” being created by the pandemic, the congregation and the agencies that work with it regularly “will assure the aid it annually sends to schools and Catholic universities, as well as assistance to the displaced in Syria and Iraq and the refugees in Lebanon and Jordan.”

To support the pope’s effort in helping those confronting the pandemic, visit CNEWA’s web site at cnewa.org. When making a donation, please note the purpose of the gift.

PREVIOUS: Pope pens editorial on joy in the time of coronavirus