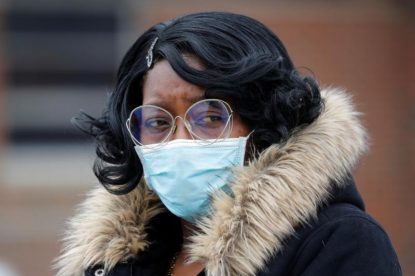 A woman in Chicago stands outside the funeral of Firefighter Edward Singleton April 22, 2020, who died from from COVID-19 symptoms. U.S. bishops issued a statement May 4 urging state and national leaders to examine the impact of the coronavirus on African American communities. (CNS photo/Shannon Stapleton, Reuters)

WASHINGTON (CNS) — A group of U.S. bishops expressed sorrow over disparities in infection and death rates among African Americans in U.S. communities.

“Our hearts are wounded for the many souls mourned as African American communities across the nation are being disproportionately infected with and dying from the virus that causes COVID-19. We raise our voices to urge state and national leaders to examine the generational and systemic structural conditions that make the new coronavirus especially deadly to African American communities,” said the statement issued May 4.

Though an accurate rate of infections and deaths among African Americans at the national level is not yet clear, some communities are reporting high and alarming levels among their respective populations.

In St. Louis, in early April, for example, statistics showed that African Americans accounted for 64% of coronavirus cases even though blacks make up 45% of the population. At around the same time in New York, African Americans were 28% of deaths, although they’re 22% of the population, and in the District of Columbia, African Americans account for almost half of the COVID-19 cases and 79% of deaths, according to May 4 figures. But some say it’s hard to get an accurate picture of the situation among ethnic communities because some members may be dying at home or not seeking health care for the disease for a variety of reasons.

Figures from the nation’s capital for the same date also showed high rates among its Latino population, saying they account for 19% of Washington’s total COVID-19 cases though they’re only 9.1% of the population mirroring similar figures in other parts of the U.S.

Some say lack of affordable housing, which causes crowded living conditions, a high rate of those populations serving as essential workers and lack of access to health care are contributing to the rise in numbers among those ethnic communities.

“We stand in support of all communities struggling under the weight of the impact this virus has had not only on their physical health, but on their livelihoods, especially front-line medical and sanitation workers, public safety officers and those in the service industry,” the bishops’ statement said. “We are praying fervently for an end to the pandemic, and for physical health for all, and emotional healing among all who have lost loved ones.”

PREVIOUS: Leaders urge Cardinal Dolan to step back from praise of Trump