Leaders urge Cardinal Dolan to step back from praise of Trump 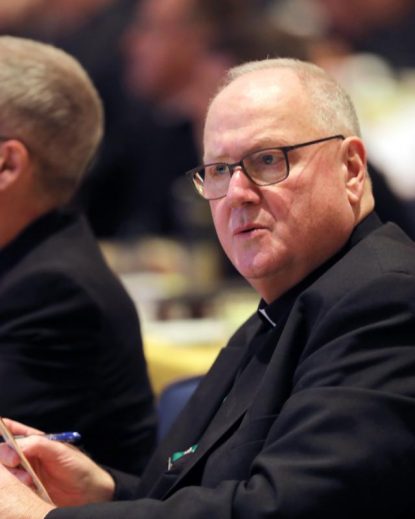 New York Cardinal Timothy M. Dolan is seen in this 2018 file photo at the fall general assembly of the U.S. Conference of Catholic Bishops in Baltimore. (CNS photo/Bob Roller)

UPDATED (CNS) — Laudatory comments about President Donald Trump by New York Cardinal Timothy M. Dolan have been blasted in a letter to the prelate from more than 1,500 faith leaders.

The letter, released May 1, said the cardinal’s late April remarks in a conference call with the president and subsequent appearance on Fox News “sends a message that Catholic leaders have aligned themselves with a president who tears apart immigrant families, denies climate change, stokes racial division and supports economic policies that hurt the poor.

“There is nothing ‘pro-life’ about Trump’s agenda,” said the letter released by the advocacy group Faith in Public Life.

In the conference call April 25 to discuss the needs of Catholic schools, which have been struggling because of the coronavirus pandemic, Trump described Cardinal Dolan as a “great gentleman” and “a great friend of mine.”

Cardinal Dolan responded that he held “mutual” feelings toward the president and that he calls Trump more often than he calls his 90-year-old mother.

Two memos obtained by Crux, an online Catholic news organization, prior to this phone call indicated that the Catholic leaders were advised before their participation in the call that it could subject them to approaches from the president’s reelection campaign.

But Chieko Noguchi, director of public affairs for the U.S. Conference of Catholic Bishops, told CNS in a statement that the purpose of USCCB’s participation in the April 25 call was to “advocate directly with the highest government officials on behalf of U.S. Catholic schools, which face an unprecedented crisis because of COVID-19.”

She said that “a small part of a confidential briefing to bishops was a warning: because they would have to provide an email address to register for the call, they might later receive unwanted email messages from the White House, and possibly the campaign. This warning was based on cautious speculation, not on any communications with the White House,” she said, adding that the “USCCB does not support or oppose any candidate for elective office.

Cardinal Dolan, discussing this phone call during an April 27 segment on “Fox & Friends,” said of Trump: “I really salute his leadership,” while adding that he also admired the leadership of New York Gov. Andrew Cuomo and New York City Mayor Bill de Blasio, both Democrats.

“Everybody has really come through, but the president has seemed particularly sensitive to the, what shall I say, to the feelings of the religious community,” the cardinal said.

“Cardinal Dolan has every right to engage with the White House. But there is a difference between dialogue and a kind of deferential coziness with a president who, frankly, has used cruelty as a political weapon and who abuses power. That’s what the concern was here. It was not that there was an engagement with this president,” Gehring said.

“Catholics want our bishops to be prophetic leaders who speak truth to power,” he added. “This call felt like the essence of transactional politics.”

While mentioning his support for Catholic schools, Trump in the conference call repeatedly turned the conversation to his positions against abortion and his work to protect religious freedom around the world and urged those on the call to vote for him Nov. 3.

A spokesman for the archdiocese declined comment on the letter.

In a May 1 Facebook Live interview with Jesuit Father Matt Malone, editor of America magazine, Cardinal Dolan defended his comments.

The cardinal said he has received “much more criticism from those you might call on the right” for his cooperation with Democratic politicians in New York, including Sen. Charles Schumer, Cuomo and de Blasio on various legislative priorities and social policies.

“The right wing is blasting me for the outreach, for the spirit of cooperation there. Now the left wing is snotty about the fact that I may have been part of, which I was, of a conference call with Catholic leaders. I would just say, ‘Look are we in the sacred enterprise of accompaniment and engagement and dialogue or are we not?’ When you do it, you risk criticism from both sides,” Cardinal Dolan said.

“Like Pope Francis says, if we build bridges, if we at least have contacts, then you can also bring up the critical things,” he said. “So sure enough, maybe the next time I am with the president I’ll say, ‘Thanks again for that call on education. You know what would be good? Why don’t you do one on immigration?'”

Other church leaders on the conference call included Cardinal Sean P. O’Malley of Boston, Archbishop Jose H. Gomez of Los Angeles, president of the U.S. Conference of Catholic Bishops, and Bishop Michael C. Barber of Oakland, California, chairman of the bishops’ Committee on Catholic Education. They limited their comments and questions to the need to preserve Catholic education in the country.

Gehring said the “silence” by others to question the president’s policies on issues of concern to the Catholic Church was “problematic.”

“That sends a message, even if unintentional, that bishops will overlook racism and nativism for anti-abortion judges for Catholic school funding,” Gehring said. “Catholics expect more from our church leaders than a transactional posture toward this administration.”

The Faith in Public Life letter urged Cardinal Dolan to “speak truth to power and refrain from even the appearance that bishops have their hands on the scales in this election.”

“When religious leaders put access to power before principles,” it said, “they risk losing the moral clarity needed to ensure politics is about the pursuit of the common good.”