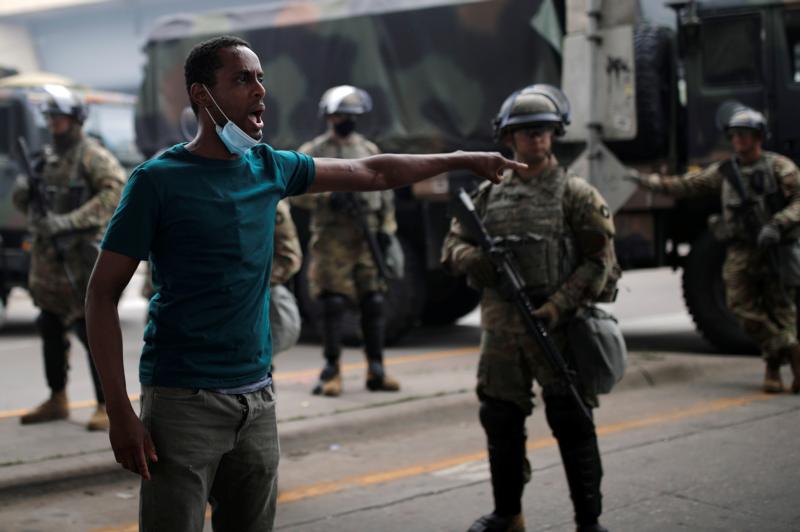 A man in Minneapolis is seen near National Guard members May 29, 2020, guarding the area in the aftermath of a protest over the death of George Floyd, an African American, while in the custody of a white police officer. (CNS photo/Carlos Barria, Reuters) See FLOYD-FABRE May 29, 2020.

WASHINGTON (CNS) — The bishop who heads the U.S. bishops’ Ad Hoc Committee Against Racism said the May 25 death of George Floyd while in the custody of Minneapolis police “reminds us that people are losing their lives because of racism.”

It also serves as a reminder that “racism is a life issue,” said Bishop Shelton T. Fabre of Houma-Thibodaux, Louisiana, whose committee produced “Open Wide Our Hearts: The Enduring Call to Love — A Pastoral Letter Against Racism,” which was approved by the U.S. bishops in 2018.

“Until we take the human dignity of each and every person — regardless of the circumstances of their lives — serious(ly), there will continue to be a loss of life due to racism,” he added. “It is outrageous that this is another African American death in police custody.”

Bishop Fabre, in a May 29 phone interview with Catholic News Service, said: “Such events as this make it very, very clear to us that racism is not a thing of the past. It’s not a political issue, it’s a human issue. It’s about people’s lives. Racism is a danger. Racism is still with us.”

Floyd, 46, was pronounced dead at a Minneapolis hospital after being handcuffed by police, with one of the four responding officers kneeling on his neck for about eight minutes. Video footage of the police tactics, with Floyd saying “I can’t breathe,” spread quickly across social media, sparking outrage and protests.

The four police officers were fired and as of midday May 29, local prosecutors filed criminal charges against at least one of the now former officers: The one who was seen putting his knee on Floyd’s neck, identified as Derek Chauvin, was arrested and charged with third-degree murder and manslaughter. In addition, the federal Justice Department promised a “robust” investigation into the circumstances surrounding Floyd’s death.

However, those responses were not fast enough to satisfy angry and anguished protesters in Minneapolis, who overran and set fire to a police station May 28 and engaged in vandalism and looting after police retreated.

Other protests against Floyd’s death took place in neighboring St. Paul, Minnesota, across the Mississippi River from Minneapolis, but also at the Colorado Capitol in Denver, the Ohio Capitol in Columbus, plus New York City and Phoenix. 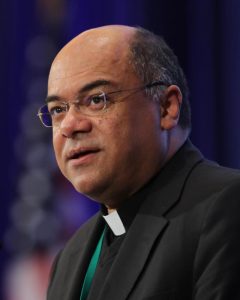 The widespread nature of the protests “reminds us that racism is far-reaching. Each and every one of us has a story with regard to racism. People of color have a story as to how racism has deeply affected them,” Bishop Fabre said. “It is something you can see in protests brewing up.”

Asked if there were something in “Open Wide Our Hearts” that addresses the current moment, Bishop Fabre suggested this: “One thing we can all do is enter into conversation with people of color and ask, ‘How did you feel when George Floyd lost his life?’ and listen to their feelings with our hearts and with our ears. Listen to what they say. When we can continue to begin acting on that belief, that common respect for one another will lead to action. And that action will lead to an end to such loss of life as we have seen.”

Otherwise, he said, “we’re going to have events like these for a long time.”

PREVIOUS: Racism seen ‘at heart’ of man’s death at hands of Minneapolis police

NEXT: Killing of Floyd is ‘sin that cries out to heaven for justice’