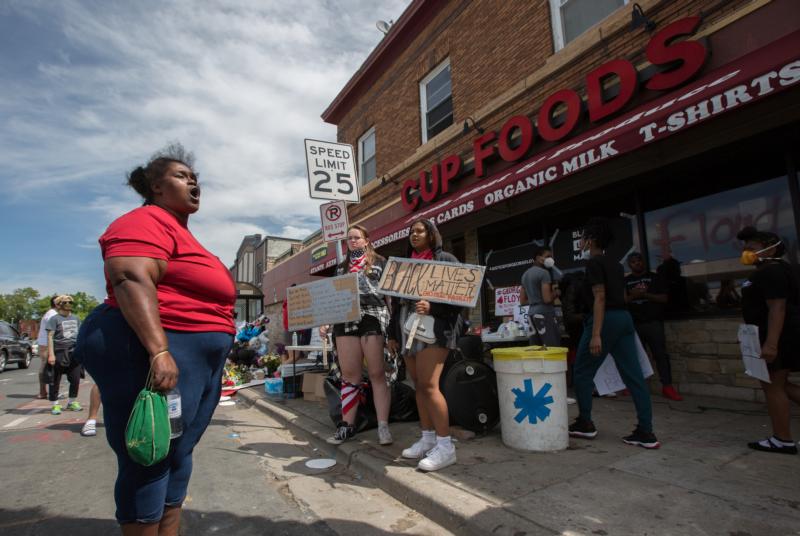 A woman in Minneapolis expresses her anger and frustration May 28, 2020, at the site where George Floyd was pinned down May 25 by a police officer and who later died at a local hospital. (CNS photo/Dave Hrbacek, The Catholic Spirit)

WASHINGTON (CNS) — The racism “at the heart” of the death of George Floyd while in police custody in Minneapolis “penetrates every aspect of life in the United States” and seeds “the terror that threatens communities of color and disfigures all our humanity,” Pax Christi USA said May 28.

The Catholic peace organization, based in Washington, said it stands “in solidarity with our siblings in Minneapolis who are protesting white supremacy with their voices and their bodies, and we recommit ourselves to working to dismantle systemic racism in all its forms.”

Floyd, a 46-year-old African American man, was arrested by police May 25 on suspicion of forgery. Once he was handcuffed, a white officer pinned him down on the street, putting his knee on Floyd’s neck for eight minutes. A now widely circulated video shows Floyd repeatedly saying, “I can’t breathe.” He appears to lose consciousness or die and was later declared dead at the hospital.

The next day, hundreds of people protested at the intersection where police officers subdued Floyd, demanding justice for Floyd and the arrest of the four officers involved. The officers were fired May 26 and as of midday May 29, local prosecutors filed criminal charges against at least one of the now former officers: The one seen putting his knee on Floyd’s neck, identified as Derek Chauvin, was arrested and charged with third-degree murder and manslaughter.

For several days, protesters have set fires and vandalized police vehicles and the Minneapolis Police Third Precinct building, as well as several local businesses. The precinct building was set on fire the evening of May 28; other buildings have been torched as well. Government officials have called in the National Guard to help keep the peace. The federal Justice Department promised a “robust” investigation into the circumstances surrounding Floyd’s death

Across the U.S., riots have erupted in a number of cities, including Los Angeles; Phoenix; Denver; New York; Louisville, Kentucky; and Columbus, Ohio.

In its statement, Pax Christi USA said it is “outraged and heartbroken” over Floyd’s death, as well as the recent the fatal shooting of an unarmed 25 year-old African American man in Georgia, Ahmaud Arbery — “and so many others, which reveal a complete disregard for the lives and dignity of people of color in our nation.” Three white men were arrested in Arbery’s death and were facing murder charges.

“Pope John Paul II called racism ‘the most persistent and destructive evil of the nation,'” the statement continued. “As Catholics, it is not enough to relegate our concern to words, thoughts and prayers. Our church, at every level, must speak out boldly and unequivocally against the sin of racism, including the plague of police brutality aimed at George Floyd in Minneapolis this week.”

The Catholic Church — “from our institutional leaders through the faithful in the pews” — must let “the injustice and violence of these needless deaths seep into our bones, rend our hearts and puncture our souls,” Pax Christi USA said.

Because of “their privilege,” white Catholics, it said, “are afforded a safe distance from the despair and agony that communities of color experience in moments like this. None of us can stand for this any longer.”

Pax Christi USA called on its white members to “support people of color movements” in their local areas “and stand with them as allies.”

In Baltimore, Archbishop William E. Lori said in a May 28 statement: “All who profess to be followers of Jesus Christ are obligated to work relentlessly to defeat the painful and persistent reality of racism in every instance and wherever it is manifested. Our hearts ache for the family of Mr. Floyd as we pray for them in this hour of their great anguish.

“We pray also for the people of Minneapolis as they now come to terms with this latest instance of injustice and with God’s help begin to bind the wounds that it has exposed.”

Bishop Nicolas DiMarzio of Brooklyn, New York, said the protests and violence that have followed Floyd’s death are taking place because “persons of color feel they have no recourse.”

“We Christians must be fierce in our opposition to the evil of racism, but we must respond peacefully and remember the Lord’s call to us to love one another as He loves us,” he added.

Texas Catholic Conference of Bishops, the public policy arm of the state’s bishops, prayed “for the Holy Spirit’s guidance as we approach this season of Pentecost in order to work toward a society where justice, peace, and charity may be shared with all of God’s children.”

Bishop Robert J. Brennan of Columbus, Ohio, said Floyd’s death “calls for an honest self-examination on the part of all of us that seeks to identify sinful attitudes and judgments that must be remedied. Laws and policies must do more to protect the fundamental rights of those at risk.”

“As people of faith in God, we must be totally committed to eradicating racism and encouraging all our neighbors to peace toward people of every race, creed and color,” he said, adding that he recognizes “most in our law enforcement community are very good people who find these situations abhorrent” and are themselves calling for investigation and action to stop such situations.

“I thank them for their service and willingness to risk their well-being to help assure the common good,” Bishop Brennnan added.

Tim Marx, president and CEO of Catholic Charities of St. Paul and Minneapolis, called Floyd’s death a tragedy that “tears at the fibers that bring us together and shines a harsh light on the systemic injustices that too many must confront every single day of their lives. We are one human family — what affects one of us, affects all of us.”

“George Floyd was killed not far from several Catholic Charities locations serving children and adults, where staff work hard to build a culture of safety and community for individuals who have experienced unthinkable trauma in their lives,” Marx said. “They are reeling, and our staff are at a loss to provide comfort.”

He made the comments in a May 29 letter to the agency’s supporters and friends.

Catholic Charities’ mission “is to serve those most in need and to advocate for justice in the community. We stand with all those who are working to confront the systemic racism and prejudice that created the conditions that allowed George Floyd to die so tragically,” Marx said.

He said the “community is shaking with emotion and violence” and the agency was concerned about the safety and well-being of its clients, its staff and the community at large.

Pax Christi in its statement said “tangible steps” are needed to build an “anti-racist society” and include “addressing the culture of policing that upholds white supremacy and working to dismantle it”; teaching the history of “systemic and institutional racism” and diving “deeply into the discomfort that … such realities raise for some of us, especially white people.”

The history of the Catholic Church “includes support for slavery, the promotion of segregation, discrimination against people of color and the silence that equals complicity,” the statement added.

In other reaction, Lawrence E. Couch, who director of the National Advocacy Center of the Sisters of the Good Shepherd, said May 29 the bottom line regarding the Floyd tragedy and the Aubrey murder is “we continue to see people of a different color as the other; and that continues to matter and reverberate throughout our society.”

“And as people of goodwill, we pray for an America united in love and purpose: united in our aspiration for racial equality, in freedom for all to dream, and an opportunity for all to become who we want to be. Sadly and tragically, we are not there yet.”

The Institute Leadership Team of the Sisters of Mercy of the Americas said: “We pray for comfort for each of these families as they face the painful loss of their loved ones. We pray for the African American community, repeatedly impacted by the trauma these killings produce, (pray) that supportive care is accessible and available. We pray for this nation’s deep racial divide and that true healing will occur.”

The leadership team named a third African American who died in March at the hands of white police officers when they entered her home: Breonna Taylor of Louisville. “We stand in solidarity with the many calling for justice and an end to the extrajudicial killings of African Americans,” the team said.

NEXT: Black Catholic bishop decries ‘loss of life due to racism’