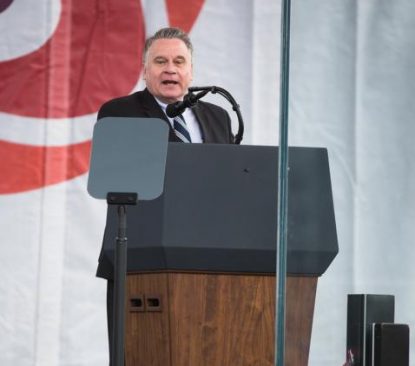 WASHINGTON (CNS) — When China threatened May 14 to retaliate against U.S. politicians for their support of federal lawsuits over the COVID-19 pandemic, one of the proposals involved stopping all trade involving certain states, including Missouri.

U.S. Rep. Chris Smith, R-New Jersey, who sponsored his own bill to strip China of its sovereign immunity and allow Americans to sue the Chinese government, thinks that for him, the Chinese will revert to a familiar tactic.

“Chinese hackers got to my office computers in 2005 and 2007,” Smith told Catholic News Service May 19. He called it “a major, major attack” to find personally identifiable information on both his staff members and at least two Chinese dissidents, Chen Guangcheng and Wei Jinshang, he was helping at the time. Also hit were office computers of now-retired Rep. Frank Wolf, R-Virginia.

Smith, a Catholic, who has served in Congress since 1981, has chaired over 60 hearings on Chinese human rights abuses.

He also was the House sponsor of the Hong Kong Human Rights and Democracy Act of 2019, which requires the U.S. government to impose sanctions against Chinese and Hong King officials who commit human rights abuses, including forced abortions and coerced sterilization.

So he’s accustomed to receiving threats, and was not surprised to read, in official Chinese media, the call for “countermeasures that will make them feel the pain.”

“That’s how they operate. They could easily cross that corner and come after individuals.”

Smith has co-sponsored H.R. 6915, the Global COVID-19 Truth, Transparency and Accountability Act, to pressure the World Health Organization to investigate the Chinese origins of the pandemic. “We need to have a truth commission.”

On May 20, the White House issued a 20-page report outlining, among other issues pandemic response and military buildup, Chinese human rights abuses. More than 1 million Uighur Muslims and members of other religious minorities have been forced into indoctrination camps.

“China is known for its torture,” Smith observed. “We’ve not known how bad it is. When you get arrested there, you’re going to be tortured, and it’s going to be hard.”

In a May 16 statement, Smith said any action against him “will not silence me or anyone who demands genuine accountability for this horrific pandemic.”

“In my state of New Jersey alone, more than 10,000 people have died from COVID-19. Beijing cannot continue to hide, lie and now threaten to stop us from demanding the truth,” he added.

As the longtime co-chair of the Congressional Pro-life Caucus, Smith told CNS he also supported the May 19 decision of the American delegation to the World Health Assembly to oppose language supporting legal abortion in a resolution over the international pandemic response. The motion eventually passed despite that opposition.

The resolution called on member states to maintain uninterrupted services for “mother and child health and sexual and reproductive health.”

The Americans said they would oppose language suggesting that “access to abortion is part of population and individual level health services,” adding, “There is no international right to abortion, nor is there any duty on the part of states to finance or facilitate abortion.”

“The World Health Organization used to be neutral on the abortion issue,” Smith said. “They should be about true health. Abortion is not health care, but it’s in everything they do, unfortunately.”

PREVIOUS: Pandemic may lead to changes in the way schools operate, say educators

NEXT: PPP loans to parishes not as large, or as many, as believed