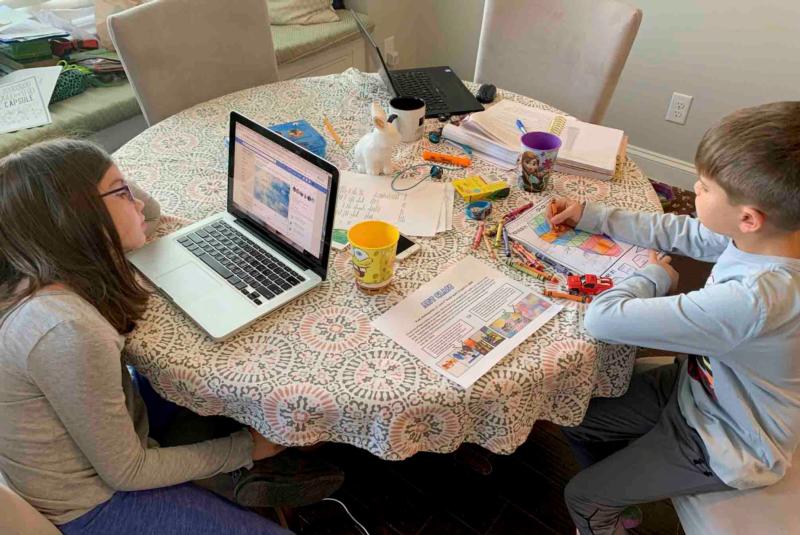 “In all my years of teaching, I’ve never experienced anything like this,” said Marsha Wharton, principal of St. Edward School in Nashville. “But you try to make the best of it.”

Schools in the Diocese of Nashville were forced to send their students home in mid-March and finish the year with distance learning, due to precautions to prevent the spread of COVID-19.

“The hardest thing about all this is every week it’s changed,” said Michael Deely, headmaster of Pope John Paul II High School in Hendersonville, Tennessee. “It’s the constant anxiety of the unknown.”

Schools have had to adjust not only how they deliver an education to students confined to their homes, but also a host of traditional end-of-the-year events, including graduation.

“We’re monitoring state guidelines” for when and how large groups will be permitted to gather, said Rebecca Hammel, superintendent of schools for the Diocese of Nashville.

“Everyone hoped to have face-to-face graduations, but in Davidson County that’s not possible to do that for a while,” she said.

“We’re looking at different options and opportunities,” she said, including rescheduling graduation ceremonies to June or July. “We really hope conditions allow us to do something face-to-face.”

“It’s important to honor the commitment and achievements of our seniors and all of our students,” said Jim McIntyre, president of Father Ryan High School.

“We are considering dates and locations now for celebrating our graduation, baccalaureate Mass, awards presentations, and many of the events that were scheduled for these last months of the school year,” he told the Tennessee Register, Nashville’s diocesan newspaper. “But those dates and locations will be dependent on the directives of the diocese, the city and the state regarding gathering during this time.

“We are communicating with our parent community regularly and expect to have decisions by the middle of May,” he added.

At the elementary school level, the pandemic restrictions have wreaked havoc with the scheduling of first Communion and confirmation as well.

“It’s huge,” Wharton said of the importance of those two events to the community. The students have been preparing for these two sacraments the whole year, she said.

Some traditional year-end events have become virtual. Schools across the diocese have been announcing end-of-year awards in videos they’ve shared online.

St. Cecilia Academy held its May 1 rosary procession and the annual May crowning online this year. St. Edward converted its Field Day, one of the highlights of the year for the students, into a virtual event.

Carrying on traditions is important, said Jennifer Crouch, director of marketing and communications at St. Cecilia. “It keeps the community together even though we are so separated. … There were some things we wanted them to know will always be the same.”

Schools have had to adjust in other ways.

At Pope John Paul II, one of the year-end traditions, Senior Walk, became Senior Drive. Instead of the seniors walking through the halls of the school one last time as students, teachers and staff say good-bye, the seniors and their families this year drove through the parking lot as the faculty and staff cheered them on.

“That was such a wonderful time to be together,” said Hammel, who was present for the event. “It was joyful and provided some closure.”

St. Cecilia honored its graduating class by having the faculty and staff deliver a dozen roses to each of its 62 seniors, while maintaining an appropriate social distance.

The goal was “to show them we do love, we do care, we are planning, to give them some reassurance that things are happening,” Crouch said.

Distance learning for the final weeks of the academic year has been challenging.

“Parents are experiencing fatigue with learning at home, and we’re aware of that and trying to adapt what we’re doing,” Hammel said.

“It’s gotten better over the weeks,” Wharton said. “The first couple of weeks were very trying for everyone.”

Teachers had to learn a different way of teaching on the run, she said. Her faculty had some good professional development on using technology in their lessons, but it didn’t prepare them for using it at the level they’ve been forced to, Wharton said.

“The teachers have worked their tails off, and I’m so proud of what they’ve done,” Wharton said.

Participating in classes through videoconferencing “can be exhausting,” Wharton said. “I’m proud of the kids.”

And parents have had challenges working from home while supervising their children, Wharton said.

“You could see a lot of kids and families hit the wall,” Deely said. The challenge for teachers was to keep their students engaged and moving forward, he said.

The pandemic may lead to changes in the way schools operate.

“A lot of professions have had to reinvent themselves,” Deely said. “Teaching is one of those.”

“It’s been challenging, but I think it’s been good because it’s kicked us into doing some things we should be doing as far as using electronic learning more,” Wharton added.

As an example, students could watch a video and then interact with the teacher while practicing the skills learned on the video, Wharton explained. “That’s something that we should be doing in the regular classroom. especially when you’re dealing with kids at different levels.”

When students return to the classroom, “it’s going to be really about the mental health,” Deely predicted. “I have no idea what this is going to do to all of us. … We want to be more prepared to handle families worn down by this experience,” he said. “We want to keep their minds hopeful and not worn down.”

Telli is managing editor of the Tennessee Register, newspaper of the Diocese of Nashville. Staff writer Theresa Laurence contributed to this story.