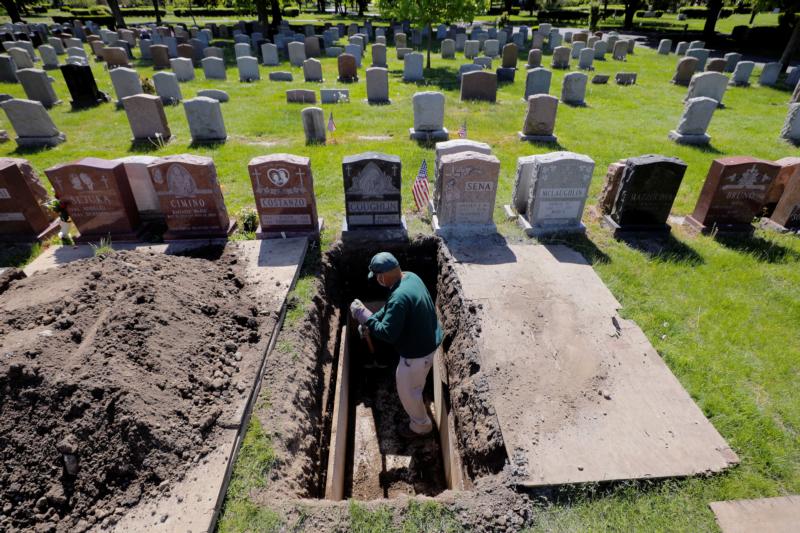 Roberto Arias of Everett, Mass., prepares a grave for burial May 27, 2020, during the coronavirus pandemic. (CNS photo/Brian Snyder, Reuters)

SILVER SPRING, Md. (CNS) — The Leadership Conference of Women Religious said May 27 it will join a group of over 100 national faith leaders — from Christian, Jewish and Muslim traditions — who have called for a National Day of Mourning and Lament June 1 for those who have died from COVID-19.

The group is urging federal, state and local elected officials to observe the day as well, which will be marked by  moments of silence, lowering of flags, interfaith vigils, ringing of bells and civic memorials.

LCWR, based in the Washington suburb of Silver Spring, said it asked its more than 1,300 members to invite the more than 40,000 Catholic sisters they represent to participate “in these actions of grieving and lament.”

“The lament will also acknowledge the hard truth this country has learned during this pandemic — that suffering has been unequal,” LCWR said in statement. “Elders, black and brown neighbors, native communities, refugees and immigrants have borne disproportionately the brunt of sickness and death.

“The faith leaders underscore that the healing of the nation must face the brokenness of its democracy as they call for the repair of the injustices this pandemic has revealed.”

Each faith tradition will incorporate “an action of lament” into its traditional services. “Together these faith traditions will name, honor and offer tributes to the lives, families and communities of those who have died,” LCWR said.

For Christians, it will be during Pentecost Sunday May 31, which commemorates “when the first Christians were given courage through the reception of the Holy Spirit.”

On May 29, with Ramadan finished, Muslims will remember the reception of the Quran. On May 29 and May 30, Jews will remember God’s covenant as they celebrate Shavuot and read their Yizkhor, or remembrance, prayers.

“We stand in solidarity with our sisters and brothers from so many faith traditions as we not only honor those who have lost their lives in the pandemic, but also call for the country to examine the injustices and inequities so starkly shown to us through this crisis,” said Sister Carol Zinn, a Sister of St. Joseph, who is executive director of LCWR.

“This pandemic must become a wake-up call that drives us to work at every level of society to change the structures that allow these inequities to persist,” she said in a statement. “We are encouraging all Catholic sisters to participate in this act of prayer and solidarity.”

The faith leaders also asked that at noon local time June 1, “the country pause once more to remember those who have died.”

The June 1 observance is being supported by the U.S. Conference of Mayors, which represents more than 1,400 mayors across the country, LCWR said.

President Donald Trump said the U.S. had reached a “very sad milestone” in exceeding 100,000 deaths and tweeted: “To all of the families and friends of those who have passed, I want to extend my heartfelt sympathy and love for everything that these great people stood for and represent. God be with you!”

Earlier he had ordered flags on federal buildings and national monuments to be flown at half-staff May 22-25 “in memory of the Americans we have lost to the coronavirus.”