Fauci to Jesuit high school graduates: ‘We will get through this’ 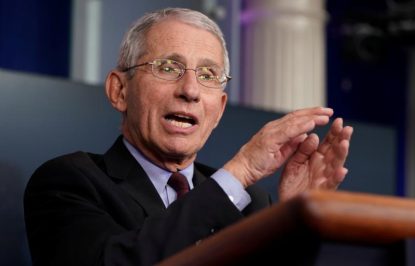 WASHINGTON (CNS) — Dr. Anthony Fauci, director of the National Institute of Allergy and Infectious Diseases, is used to addressing the country about steps to contain the coronavirus, but in mid-May he spoke directly to graduates of the nation’s 60 Jesuit high schools with words of encouragement and congratulations.

“Please, hang in there. We need you to be smart, strong and resilient. With discipline and empathy, we will all get through this together,” he said in a recording sent to Jesuit high schools that many posted on their school websites.

Fauci, who earned the nickname “America’s doctor” years ago and has advised six U.S. presidents on national health concerns, was Jesuit-educated in both high school — at Regis High School in New York — and college — at the College of the Holy Cross in Worcester, Massachusetts.

The idea to have him talk to Jesuit high school graduates came from Jesuit Father Daniel Lahart, president of Regis High School. He told America magazine he had asked Fauci to record a video message for the school’s online graduation ceremony but that idea expanded to another video message request after another Jesuit school president said he had a similar idea.

So, the Regis president asked if Fauci could do a second, more general message for all Jesuit high school seniors.

The result is a two-and-a-half minute recording that begins with “warm greetings from Bethesda, Maryland” and ends with the doctor’s wishes of congratulations and advice to: “Stay safe and be well as you celebrate this important milestone of your life.”

“Currently, our lives have been upended by a truly historic global pandemic,” Fauci said, adding that he was “profoundly aware that graduating during this time, and virtually, without your friends, classmates and teachers close by is extremely difficult.”

The nation’s top infectious disease expert gave a shoutout to his own Jesuit education by saying he often describes Regis High School as the “best educational experience” he could have imagined. He said it was where he “became immersed in the intellectual rigor of a Jesuit education” and where he picked up key tenets of the Jesuit tradition that have sustained him throughout his life and career.

“Two of these — precision of thought and economy of expression — inform how I think, how I write and how I communicate with the public every day,” he said. He also stressed the Jesuit emphasis on social justice and service is especially important “during the present unsettling times.”

“Now is the time, if ever there was one, for us to care selflessly about one another,” he said.

Father Lahart admitted the video messages were “an audacious ask of someone who is incredibly busy and concerned with worldwide health,” but he also said Fauci “speaks so easily about what his Jesuit education means to him, so I presumed it wouldn’t take him long to film either one.”

“Today, we also can all take pride that the man who is probably the most trusted person in the United States is a graduate of a Jesuit high school and a Jesuit college. He takes great pride in his Jesuit education, and as he proudly professes, it has formed his life and his career,” the priest said.

The same week this video was posted on Jesuit school YouTube accounts, Fauci gave testimony by video before the Senate Committee on Health, Education, Labor and Pensions. He is observing a “modified quarantine” after being in contact with a White House staffer who tested positive for the coronavirus.

In his May 12 remarks to Congress, which have drawn criticism from President Donald Trump, Fauci warned some states are reopening too early and risking additional outbreaks of coronavirus cases especially in vulnerable populations.

Reopening too soon, without widespread testing and contact tracing measures, he said, could trigger outbreaks that governments may not be able to control. He also warned that new hot spots could cause unnecessary suffering and deaths and in turn set back efforts to help local economies.

On the day of his testimony, more than 80,684 people in the U.S. had died from COVID-19, the disease caused by the coronavirus, and more than 1.3 million people in the country had confirmation they’ve been exposed to it.

Fauci also repeated his call for a vaccine and warned that it likely would not be ready by the next school year.

Although his message to Jesuit school graduates was far less dire, it was not the first time Fauci has been called back to school, so to speak. A year ago, he addressed Regis alumni and waxed nostalgically about his four years there. He also spoke about his career, saying he had been decidedly apolitical and nonideological in his work with six presidential administrations.

Fauci earned the Presidential Medal of Freedom from President George W. Bush for his work in Africa developing a program to stop the spread of HIV/AIDS.

During his Regis talk last May, when asked if there was anything that kept him up at night, Fauci told the group that he sleeps well because his days are usually so long, but he did have one worry.

“I worry about a pandemic,” he told fellow Jesuit alums, saying he was concerned about the potential emergence of a virus that could attack the lungs, similar to the flu that killed millions in 1918 and 1919.