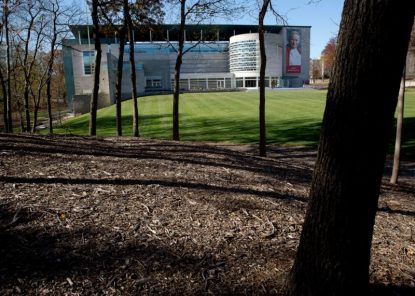 WASHINGTON (CNS) — St. John Paul II, the longest reigning pope in modern history, was born May 18, 1920, and the national shrine in Washington dedicated to the pontiff will celebrate the centennial of his birth with a series of virtual events May 16-22.

The St. John Paul II National Shrine had originally planned several in-person events, including an academic-style symposium, but adjusted its celebration to an exclusively virtual format because of the COVID-19 impact.

One of the highlights for May 18 is the pontiff’s biographer George Weigel will lead an installment of the “Shrine Webinar Series” titled “Centennial Celebration of St. John Paul II’s Birth” at 6 p.m. (Eastern time). The webinar will be available at this Zoom link, and also available on YouTube.

A centennial Mass will be celebrated May 18 at noon (Eastern time) with a homily focused on St. John Paul. The same day there will be a Divine Mercy chaplet and reflection at 3 p.m., with the praying of the rosary at 8 p.m., which is co-sponsored by the Knights of Columbus Supreme Office.

Other scheduled events include:

— May 16: The launch of the “Gospel Gladness” video series focused on helping families bring the joy of the Gospel into their homes.

— May 17: A video uploaded to the shrine’s YouTube channel as part of the “Art of Prayer” series that explores how Mary was woven into St. John Paul II life; this supplements existing videos in the series.

— May 21: An installment of the “Gospel of Life” webinar series at 12:45 p.m. (Eastern time) on the theme of accompanying disabled persons, in commemoration of the 25th anniversary of the pope’s encyclical “Evangelium Vitae.”

— May 22: A virtual offering of the “Evenings With the Merciful Jesus” spiritual program at 7 p.m. (Eastern time) led by the Sisters of Our Lady of Mercy who actively minister at the shrine.

PREVIOUS: Fauci to Jesuit high school graduates: ‘We will get through this’

NEXT: Extreme caution tops checklists for Catholic colleges to reopen in fall