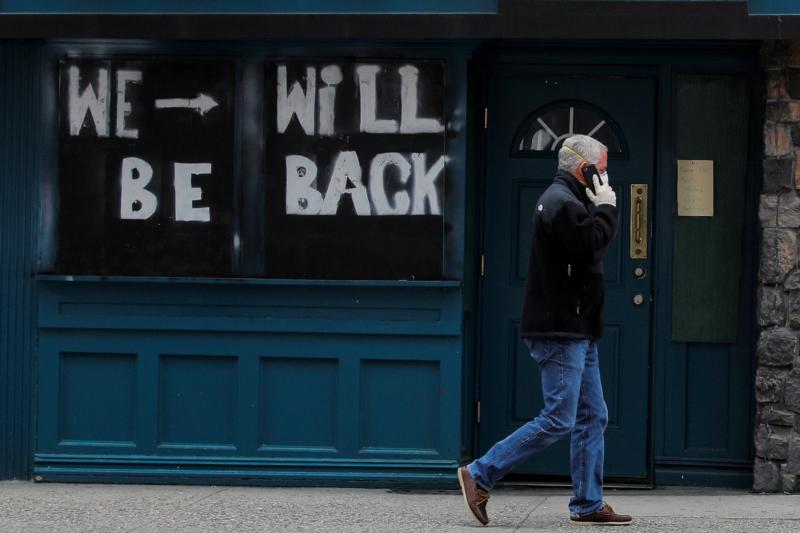 A man passes by a boarded up restaurant in New York City April 29, 2020, with a sign suggesting it will reopen for business once it's safe in the coronavirus pandemic climate. Santa Clara University recently hosted an ethics discussion about when and how businesses should reopen. (CNS photo/Brendan McDermid, Reuters)

If he got the word that his business could fully reopen, Chuck Hammers replied flatly, “Absolutely not. We’re not ready.” Hammers is CEO — although he calls himself “the big cheese” — of Pizza My Heart, a chain of 25 shops in the region.

“We’re in a more experienced place right now where we’ve had seven weeks of how you keep people safe,” said Susan Brennan, chief operating officer of Bloom Energy, which has been declared an essential business in the state.

“The next big challenge is going into large buildings, with elevators … with cafeterias. With shared tenants,” Brennan added. “When each individual tactic can be managed in a safe way, that’s when you go in.”

Joining the forum was Ann Skeet, senior director of leadership ethics for the university’s Markkula Center for Applied Ethics.

“I really like the ethics of care. … That’s our primary obligation right now,” Skeet said. The objective in the pandemic, she added, is to be “less focused on outcomes, which is a bit unusual for those involved in leadership.”

Skeet said: “It’s important that we have ways to hold companies accountable for their behavior. … We’ve seen some of the larger companies not following the earlier guidelines — such as applying for the Paycheck Protection Program loans. We need mechanisms for applying this as we go,” with “rational, well-reasoned legislation to support consumers and employees.”

Hammers has had his own experience with the PPP loan process.

“I applied in the first hour it was available,” he said. “I did not get in because they chose to do all smaller businesses.” With the second influx of PPP funds, Pizza My Heart has reapplied, but “I get the same email from them: ‘Hey, you’re still in line.'”

Hammers added: “It will make or break my business.” He’s kept 350 employees on the payroll, but laid off 162 others, “which is really sad for me.” Still, “I need to hear from the government this (money) is not going to run out,” acknowledging the anxiety “to watch your email every day and not know whether this is going to come in.”

He said the pizza company has five core values, with the first being to “create family. We want our family back together” and bring back laid-off workers. Our last core value is “trust in karma. We trust we’re going to get out of this … whether we have to wait a month or three months and take it slow.”

For Brennan, one way to show leadership is to do what she asks of her workforce. “I follow all the same practices,” she said. “When I come in, I get my temperature taken. If there was someone else in this room, I would have a mask on. When I leave the room, I have a mask on,” she said, adding, “When you’re in manufacturing, you can’t work from home.”

To that end, she added: “the No. 1 thing our employees wanted is (that) they got a letter for when they got pulled over by the police, that they were essential employees.”

For Skeet, “getting a school year back and child care back” are key markers to reopening.

Children are an important consideration to the business leaders themselves.

He added that he told his children: “This is a moment you will never forget,” wanting them to ask themselves that in the midst of living in a pandemic, “What did you find to gain?”

Brennan, a single mother, has four children. Only the youngest, a senior at Notre Dame High School in San Jose, California, lives at home. “She’s pretty self-reliant” because Brennan has had to travel so much for her job, she said.

Brennan checked in with her daughter and learned “she wasn’t doing as great as I thought she was,” she said. “She was struggling, and I was not there to help her through that.” One of her own aims, Brennan added, is “to be a more empathetic parent.”

NEXT: How much time on screens is too much for preschoolers?