How much time on screens is too much for preschoolers? 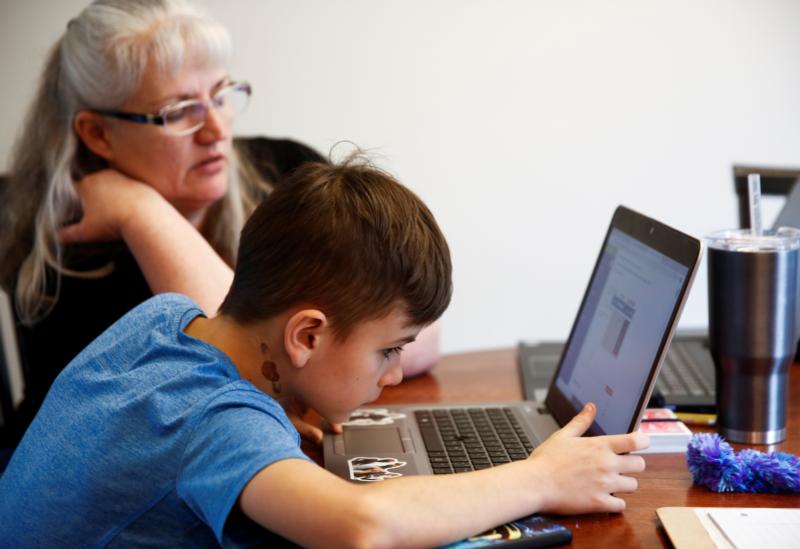 Caidence Miller stares at a computer screen as his grandmother, Chrissy Brackett, watches in her Woodinville, Wash., home March 11, 2020. A forum called "Children and Screens" hosted by the Institute of Digital Media and Child Development recently explored how much time is too much time for preschoolers and screens. (CNS photo/Lindsey Wasson, Reuters)

WASHINGTON (CNS) — When considering whether to expose a preschool-age child to screens, “the first thing we need to think about is the child,” said one longtime children’s advocate, “and you as the parent know more about your child than anybody else.”

Screens are unhelpful when they show violence to young children, said Ellen Wartella, director of the Center on Media and Human Development at Northwestern University in Evanston, Illinois. “It can also be a wonderful resource when used thoughtfully, selectively and with a lot of parental oversight.”

Worth keeping in mind is personality differences among children, Wartella said. “Are they an anxious child? Do they have trouble getting to sleep?” she asked. Moreover, “not all content is the same,” she added. “Is the content age-appropriate?”

Wartella said: “We all know PBS has wonderful preschool shows,” citing “Mister Rogers’ Neighborhood” as an example that “you could produce programming that met children’s emotional context.”

“But do you know about preschool apps?” she asked.

In 1981, the typical age for children to be first exposed to screen media was 3, according to John Hutton, an assistant professor in the University of Cincinnati’s Department of Pediatrics. By 2011, that had been reduced to 9 months of age, and to 4 months by 2018. In 2020, babies as young as 2 months may be getting their first exposure to screens. “How do digital technologies nurture?” Hutton asked.

“Every grandparent and every teacher knows that reading is good and reading is healthy,” he said, adding research now shows that kids by 5 are helped by having reading activity “explaining how the book relates to the world.” It has been the adult’s job to foster “the child’s interest in reading — getting them engaged, getting them to pay attention.”

Hutton pointed to a study published last fall that showed that more reading resulted stronger brain connections, while more screen time brought about weaker connections. “This is not the definitive answer to scare everybody to death,” he said, adding more studies need to be done to determine long-term effects.

“You’re human. It’s OK to be struggling right now. It’s OK to be a little lenient,” said Brandon McDaniel, a research scientist in health services and informatics research for the Parkview Mirro Center for Research & Innovation. Don’t, he cautioned, be “so stressed out that you’re going to blow.”

McDaniel advised setting up a “family media plan,” which includes “tech-free times” and to talk about expectations for tech times and use.

“Young children need a responsive caregiver,” especially in what McDaniel called “unprecedented” times. “But as much as we can, practice sensitivity: being aware of child’s needs; interpreting cues correctly,” and responding in a timely manner.

A parent’s phone or tech use “likely impacts on all aspects of sensitivity,” McDaniel said. “It distracts,” making the adult less aware of cues from their kids, more likely to misinterpret cues, delay a response — if one is given at all — or provoke an inappropriate response.

“Maybe you’re so engrossed in what you’re doing or it’s so important because of work” that an adult caregiver makes an inappropriate response, McDaniel said.

Having a family media plan “will help, even if it doesn’t work out perfectly. It’s not working perfect in my home,” McDaniel said. “There’s just so much we’re trying to manage at the same time.”

A plan “doesn’t have to be specific down to the last minute,” he added, but there should be “times of day when screens will be used and not used” and plans for what will be done then.

NEXT: Bishops around country consecrate U.S. to Mary amid COVID-19 pandemic