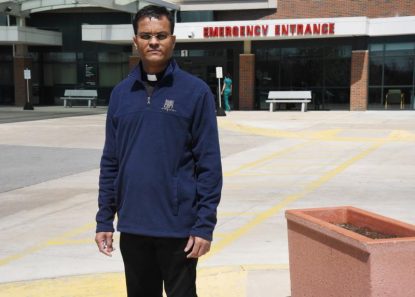 Father Sengole Thomas Gnanaraj, administrator of St. Elizabeth Ann Seton Parish in Richmond, Ind., is pictured April 22, 2020, outside Reid Health Hospital. He is among a select group of priests in the archdiocese who are ministering to the dying during the coronavirus pandemic. (CNS photo/Sean Gallagher, The Criterion)

RICHMOND, Ind. (CNS) — Robert Muldoon was close to death, infected with the coronavirus, as he waited for a visit from Dominican Father Patrick Hyde.

When the priest greeted him in his room at a nursing home in Bloomington, Indiana, Muldoon was overjoyed.

Father Hyde, administrator of the St. Paul Catholic Center in Bloomington, recounted the graced encounter on Twitter without identifying Muldoon at the time.

“This is the power of the sacraments and why I’m a priest,” he wrote.

For more than a month, churches have been empty. No baptisms, no weddings, no confessions heard. Priests celebrate Masses alone, livestreaming them on the internet.

But they still go out to people who are dying to administer the sacrament of the anointing of the sick, even to those who are suffering from the virus.

A select group of priests across central and southern Indiana have committed themselves to ministering to people who are quarantined.

Such dedication in a time of social distancing and rigid quarantining is a solace for Catholics who yearn for the sacraments and for family members.

“It’s very comforting to know that somebody will be there for him,” said Paul Muldoon, one of Robert’s sons. “That’s a wonderful thing.”

“It was beautiful just to be able to be there,” Father Hyde told The Criterion, newspaper of the Archdiocese of Indianapolis. “As we Catholics believe, the priest acts in the person of Christ when he acts sacramentally. So, being able to bring and to be Jesus for him in that moment was a powerful experience.”

Being asked to be a priest to minister to the dying led Father Sengole Thomas Gnanaraj to prayer. 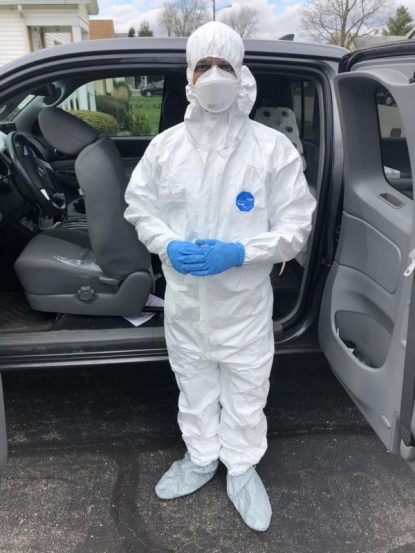 “I was praying for the ministry and preparing myself mentally so that, if someone called me, I would go,” said Father Gnanaraj, administrator of St. Elizabeth Ann Seton Parish in Richmond.

In mid-April, that call came. Three people from the same family living in nearby Connersville were sick. Two had tested positive for the coronavirus. A third was presumed to be infected. One was believed to be close to death.

Father Gnanaraj drove to their home, put on a protective suit and went in to anoint all three of them.

“It was a feeling that I’ve never had before,” he said. “I couldn’t describe what I felt. I was not scared.”

It was also a moving moment for those who were anointed.

“They thanked me profusely,” Father Gnanaraj said. “Deep within myself, I was very happy to be able to do this ministry, giving God’s mercy and sacraments when people are in dire need of it. We do what we can and God takes care of the rest. We are his instruments and his ministers, always serving the Lord.”

Father Hyde said being asked to minister to the dying during the pandemic emphasizes the commitment that priests make at their ordination.

“Just like (Archbishop) Fulton Sheen said, the priest is not his own,” Father Hyde said. “It’s a commitment to be faithful to what the good Lord is asking of us in whatever situation in which we find ourselves.”

He admitted that the prospect of ministering to people with the coronavirus gives him pause.

“It’s scary. You just don’t know. At the same time, I became a priest not so that I could go to heaven, although I hope and pray that I go to heaven, but because I felt called to lead other people to heaven,” he said.

“(Anointing of the sick) is about giving people peace of mind and soul and preparing them to see God face to face.”

Father Sean Danda, pastor of St. Malachy Parish in Brownsburg, has anointed people several times during the pandemic as a priest designated to minister to the dying in areas west of Indianapolis.

While on a retreat in Belgium before his ordination in 2009, he prayed at the tomb of St. Damien of Molokai, a Belgian missionary priest who ministered in a leper colony in the 19th century in Hawaii.

St. Damien has come to Father Danda’s mind during the pandemic.

“I’m called right now in my priesthood to go amongst those who are considered untouchable and to touch them,” he said, “to minister to them, to put my life in harm’s way to bring the healing hand of God to many people who are desirous to meet the Lord and his love.”

Father Gnanaraj said his ministry is a way the church reaches out to people on society’s margins, which Pope Francis has emphasized during his papacy.

“Who is on the periphery now? I would say it’s those people who are affected by this illness,” Father Gnanaraj said. “They are on the periphery. They’re quarantined. No one can go near them. The church reaches out to them through the priests and the sacraments.”

Father Danda, like the other priests across central and southern Indiana who are ministering to the dying during the pandemic, finds happiness instead of fear when reaching out to them.

“Providing the grace of the sacraments and bringing God’s presence to them is an honor and a joy for the people who are dying or close to death,” he said. “It also eases the minds and hearts of their loved ones.”

NEXT: Archdiocese of New Orleans files for bankruptcy