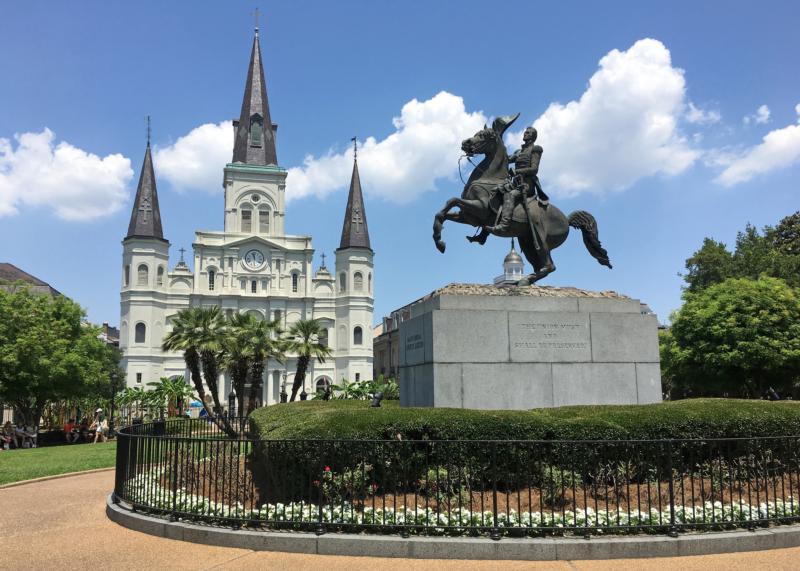 The Cathedral-Basilica of St. Louis King of France and a statue of Andrew Jackson are seen in New Orleans June 3, 2019. The Archdiocese of New Orleans filed for Chapter 11 reorganization May 1, 2020. (CNS photo/Gregory A. Shemitz)

NEW ORLEANS (CNS) — Citing mounting concerns over the financial impact of clergy sex abuse settlements and the coronavirus pandemic, the Archdiocese of New Orleans filed for Chapter 11 reorganization of the finances of its administrative offices May 1 in U.S. Bankruptcy Court for the Eastern District of Louisiana.

In an interview with the Clarion Herald, Archbishop Gregory M. Aymond of New Orleans said the “difficult decision” to file for financial reorganization would allow the archdiocese to ensure that sex abuse victims have their claims resolved in “a fair and timely manner.”

“I want to reach out to the victims and survivors of sexual abuse, and my continued daily prayer is that God will give them hope, peace and renewed life,” the archbishop said. “I am willing to walk with them in any way possible — in any way that they would ask me to.”

In a separate letter to Catholics of the Archdiocese of New Orleans, Archbishop Aymond said filing for Chapter 11 reorganization “will allow us to address remaining clergy abuse claims, all of which stem from allegations dating back several decades ago, in a way that will allow funds to go directly to victims.”

He said no parish funds — such as money received through the collection basket — would be used to resolve claims. He stressed that the filing affects only the archdiocese’s administrative offices, not individual parishes, schools or other ministries that are separately incorporated.

In his letter to archdiocesan Catholics, the archbishop also emphasized that “parish funds are separate from archdiocesan accounts, and the pastor decides how those are used for parish ministry.”

The archbishop told the Clarion Herald that the Chapter 11 process ultimately was considered because of the large number of unresolved sex abuse cases — dating back decades — might make it financially impossible for the archdiocese to handle all claims equitably.

“Why did we do this? We did it so that we could reach out to victims and survivors equally and fairly and to hopefully offer them some healing, but also compensation,” Archbishop Aymond said. “Otherwise, the victims and survivors who went into the process first — we basically would have run out of resources, and some would have gotten little or nothing.”

“Secondly, we simply can’t afford the costly litigation that probably would have taken many, many, many years.

“Additionally, the unforeseen circumstances surrounding COVID-19 have added more financial hardships to an already difficult situation,” he said. “It’s been very difficult in parishes because many of them don’t have a source of income.”

Regarding the sources of money that the archdiocese will need to pay the outstanding sex abuse claims, Archbishop Aymond said he could not give a definitive answer. The archdiocese is expected to tap into insurance, investments, sell “property that we don’t need and don’t use” and sell oil and gas royalties that it owns.

“We just could not afford the cost of litigation that would have gone on for years,” he said. “This was one way of putting all of these together.

“Some would say we have avoided lawsuits. That was not the main focus. The main focus was to reach out to victims and treat them equally and fairly and to bring an end to this costly litigation.”

Archbishop Aymond said he first considered the prospect of filing for Chapter 11 “when the number of cases kept increasing and many of them were not requesting mediation. The number of lawsuits kept increasing. We would not have been able to afford the legal fees, much less the compensation for the victim.”

He said the number of cases increased significantly after the archdiocese released in November 2018 a list of priests who served over many decades and were removed from ministry for an allegation of sexual abuse of a minor.

“Certainly, after the list was published, many cases came in and we were able to mediate many of them,” he said. “But then the lawsuits started coming in, and it became a large number that we would not be able to afford.”

When asked how many cases there are, the archbishop said he preferred not to give a specific number.

“We have too many cases, but even one case is one case too many,” he said.

The archbishop pledged that the archdiocese would continue to pay its bills “responsibly” and said “individual parishes, their schools, schools run by the various religious orders or ministries of the church” would not be affected.

“This will allow for our administrative offices to continue and, by the grace of God, emerge better prepared for the future,” he said. “We will be paying the people that we owe money to 100% of what we owe, because we are not bankrupt financially.”

“I have talked to some of the bishops (who went through Chapter 11) and they were very encouraging,” Archbishop Aymond said. “They agreed that at a certain point you have to do this in order to continue the ministry of Christ, and that’s what we want to do. We want to continue our ministry, not just at the parish level or the school level or the agency level. We want to make sure we have the resources to continue our ministry. The dioceses who have gone through this process have bounced back.”

In acknowledging the bankruptcy court now controls the process, the archbishop said he hoped the reorganization would be completed “as soon as possible” without any interruption in ministry.

“We are estimating a year to a year and a half,” Archbishop Aymond said.

He also said he believed the process would allow the archdiocese “to renew our commitment to the faithful and the New Orleans community by restructuring our financials, increasing our transparency and creating a path forward” in serving its “core mission: bringing Christ to others.”

He acknowledged that the reorganization would bring with it an assessment of how the archdiocese is doing its ministry.

“In the reorganization, we have to ask some questions,” he said. “Could some ministries be combined? Are we using the gifts of people effectively and efficiently? We do not intend to drop any ministries. We have to find a way to utilize our staff to the fullest ability.”

When asked how personally painful it was to listen to victims’ stories in their private meetings with him, the archbishop said it was “impossible” for him to put himself in their place.

“I do the best I can to try to feel some of their pain,” he said. “The stories are just very, very painful. People come in with broken hearts, with anger at the person who did it, sometimes anger at God and at the church, and it’s very painful.”

Asked about the reaction he has received so far from Catholics about the Chapter 11 filing, the archbishop said many have been “very understanding of why we did it.”

“We admit the sin of the past and the sin of several priests of the past,” Archbishop Aymond said. “We want to move toward healing and compensation for victims. But it’s a new day. We have not had a substantiated accusation of sexual abuse of a minor in almost two decades. All of these happened 30, 40, 50 years ago.”

The archdiocese established a website — www.nolacatholic.org/renew — containing information on the Chapter 11 filing and other questions.

PREVIOUS: Indiana priests bring ‘power of the sacraments’ to the dying during pandemic