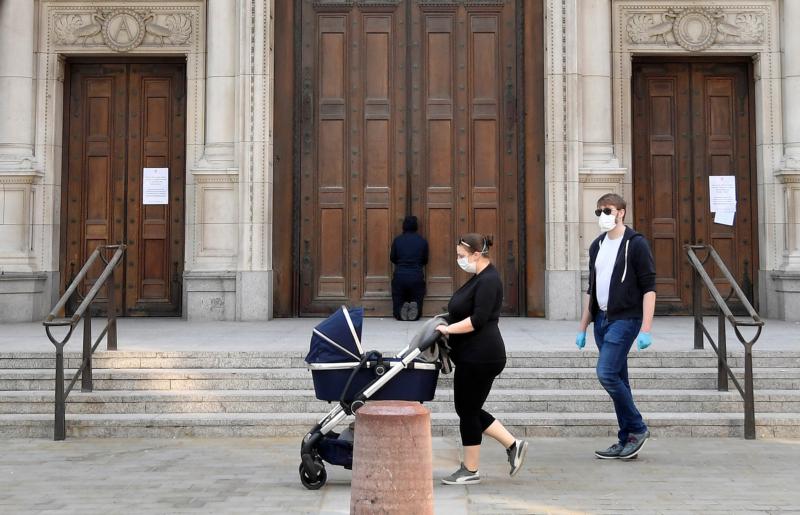 People wearing protective masks walk as a person prays at the closed doors of London's Westminster Cathedral on Easter, April 12, 2020, during the COVID-19 pandemic. Churches in England and Wales must wait until July before they may reopen under a coronavirus recovery strategy published by the government. (CNS photo/Toby Melville, Reuters)

MANCHESTER, England (CNS) — Churches in England and Wales must wait until July before they may reopen, under a coronavirus recovery strategy published by the government.

Prime Minister Boris Johnson’s 50-page blueprint to ease the eight-week national lockdown says places of worship cannot open until July 4 at the earliest, meaning that churches will be closed even to private prayer for at least another seven weeks.

Called “Our Plan to Rebuild,” the strategy lists churches in the same “higher risk” category of businesses and public places as pubs, cinemas, hairdressers and beauty salons because the government believes social distancing within them will be difficult at a time of elevated risk of infection.

But the policy, published May 11, drew criticism from the Catholic bishops of England and Wales.

“The timing and the manner of the opening of churches touches profound sensitivities and spiritual needs,” said a May 11 statement from the English and Welsh bishops’ conference.

“The government’s document and statements fail to recognize this,” the statement said.

The bishops noted the government wanted a task force to make a plan, but noted that, in dialogue with the government, the church “has already submitted a detailed plan, in full accordance with public health guidelines, for churches to be opened for private prayer.”

“The church is ready to play its full part in the task force, understanding that this includes the possible earlier use of churches for private prayer, as a first safe step toward their use for public worship,” it added.

The recovery strategy is driven by the need to restart the economy after it almost closed down at the end of March as the U.K. entered the period of peak infections from COVID-19 over the Easter weekend.

On May 10, Johnson announced among the first steps of the recovery strategy the immediate return to work of people within certain industries, such as construction and manufacturing, who were unable to work from home. Garden centers are among other businesses allowed to reopen beginning May 13.

In Scotland, the bishops established a COVID-19 working group May 5 to liaise with the Scottish assembly about how and when churches might reopen there.

According to official figures released May 12, the U.K. has had more than 40,000 deaths from the coronavirus, giving the country the highest fatality rate in Europe.