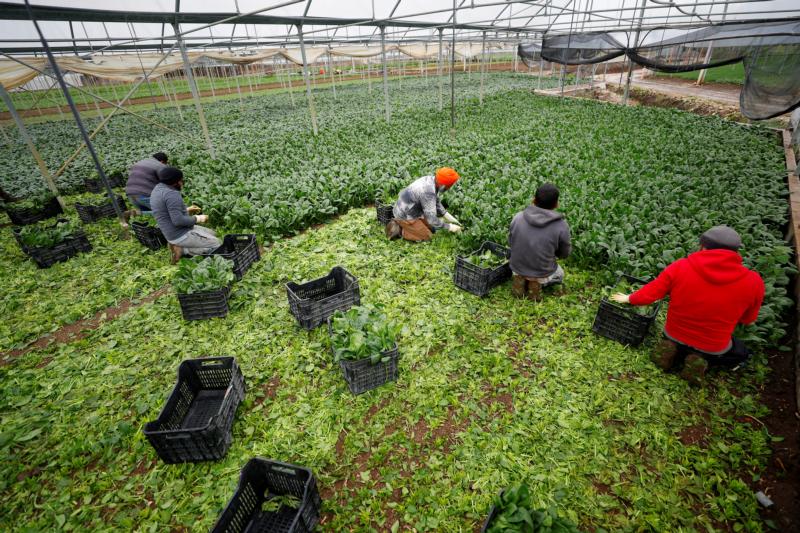 Indian farmworkers collect vegetables that the company hopes to sell in the market in Sant'Angelo Romano, Italy, in this April 22, 2020, photo. (CNS photo/Guglielmo Mangiapane, Reuters)

ROME (CNS) — In an effort to curb the exploitation of migrant laborers and boost its crippling agriculture industry, the Italian government has granted temporary residency to agricultural workers without proper immigration documents.

Italian Prime Minister Giuseppe Conte announced the measure May 13 during an evening news conference while presenting the government’s “Relaunch Decree,” a 55 billion-euro ($59.4 billion) package to relaunch Italy’s struggling economy in the wake of the coronavirus pandemic.

Granting temporary residency to migrant farmworkers is a victory “in the fight against crime and in putting an end to the black market in the workforce,” Conte said. He also said the measure guarantees migrants “an adequate level of health care in front of this exceptional health crisis.”

In an emotional statement, Italy’s Agricultural Minister Teresa Bellanova, who worked in the fields as a teenager and went on to become a labor rights advocate, wept during a news conference following the announcement.

The measure was a point of contention between the two parties of Italy’s fragile coalition government — the center-left Democratic Party and the anti-establishment Five Star Movement.

It also drew the ire of the country’s right-wing parties, who criticized the move as amounting to amnesty for immigrants in the country illegally and ignoring unemployed or furloughed Italian citizens.

Hundreds of thousands of migrant farmworkers, primarily from Eastern Europe and Africa, travel to Italy every year during harvesting season and are often paid meager wages or exploited by the mafia and human traffickers.

After the outbreak of the pandemic and subsequent nationwide lockdown, thousands returned to their home countries out of fear of contracting the coronavirus, resulting in the loss of countless crops and threatening the collapse of Italy’s agricultural sector.

Many workers without documents who chose to remain in Italy continued living in poor conditions, which increased the risk of them spreading COVID-19.

Pope Francis recently expressed his support for granting legal status to such workers in a letter sent to Onofrio Rota, secretary general of an Italian farmworkers’ union.

An excerpt of the pope’s message of support, which was signed on the pope’s behalf by Archbishop Edgar Pena Parra, the Vatican substitute secretary for general affairs, was posted April 28 on the union’s Facebook page.

The union said the letter was a response to a message Rota sent to the pope “asking for comfort and encouragement for workers employed in the agriculture and food industry and to highlight the issue of the legalization of undocumented migrants as a priority.”

“On behalf of the Supreme Pontiff, I am pleased to report his closeness to the many workers who, within the food industry, are making considerable efforts, under considerable risks and difficulties, to provide the necessary food to the community,” Archbishop Pena Parra wrote.

“The pope remembers them in prayer, while he carries in his heart the painful situation of farmworkers from various countries, who are relegated to the margins of society and suffer unacceptable conditions of exploitation,” he said.

Pope Francis agreed it was necessary “to meet the needs of those who, deprived of dignity, feel acutely the consequences of an integration that has not taken place and are now more exposed to the dangers of the pandemic.”

“It is therefore desirable that their situations should come out of the underground economy and be regularized so that every worker’s rights and duties are recognized” as well as to prevent the criminal exploitation of undocumented workers, the letter said.

NEXT: Church’s 1684 response to pandemic would be familiar today