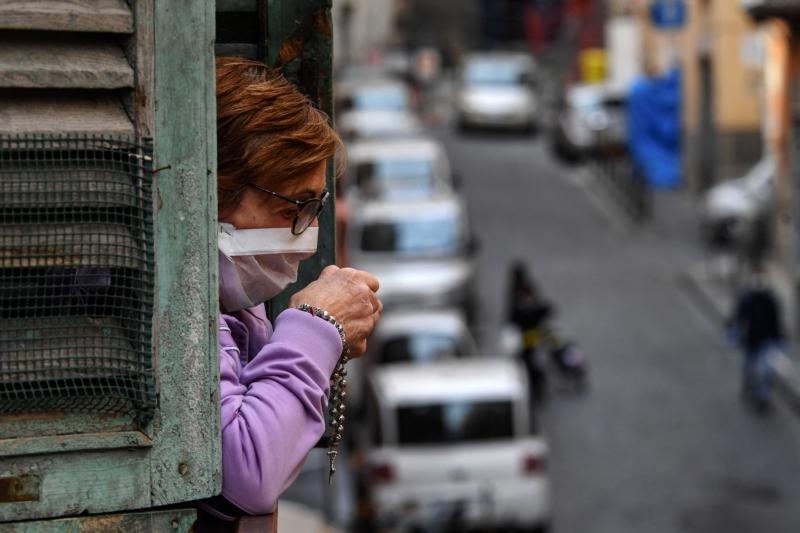 A woman prays in a window opening overlooking a street in Milan, Italy, March 21, 2020, during a nationwide lockdown to reduce the spread of COVID-19. A recent study shows an increase in prayer and religious fervor in Italy amid the coronavirus pandemic. (CNS photo/Salvatore Laporta, Reuters)

ROME (CNS) — The uncertainty and restrictive measures in place due to the coronavirus pandemic caused an increase in prayers and religious fervor in Italy, a recent study said.

The study, which was released May 22, was conducted by the State University of Milan, to “daily monitor public opinion during the COVID-19 emergency” and the impact it “has had on the religiosity of Italians.”

After lockdown restrictions forced churches to close their doors, “the frequency of prayer and participation in religious services increased, although these could be attended only virtually,” the report stated.

The study, which asked participants about their behavior prior to the pandemic, reported an 11% increase in daily prayer among what it described as “nominal Catholics,” those who said they were Catholic but seldom or never went to Mass.

However, it added, “the growth of religious practice was primarily influenced by the most acute phase of the crisis. In fact, the frequency of prayer decreases with the reduction of those infected.”

Those who had a family member infected by the coronavirus “significantly increased their participation in religious services and prayer,” it said.

Participation at Mass — in person before the pandemic and online during it — was only minimally different for people over the age of 45, the study said. However, there was an increase of 17% in Mass participation among those under 45.

The study also revealed the sentiments of both practicing and nonpracticing Catholics toward the pope and the church.

Most notably, the report noticed that political affiliation influenced the opinion of Catholics toward the pope.

Catholic members of Italy’s right-wing parties — the Northern League and Brothers of Italy — “have less trust in Pope Francis, while their trust in the church is similar to that of other individuals,” the report said.

NEXT: The quiet pandemic victims: Those grieving death