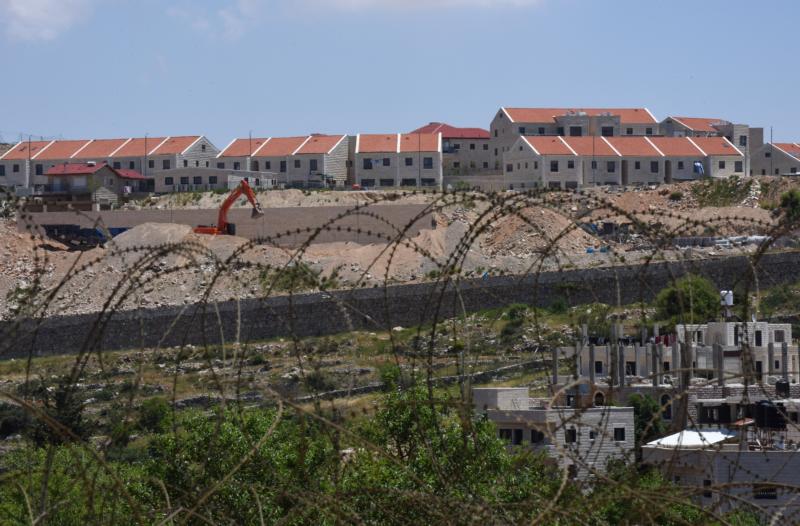 New housing units being built in the Israeli settlement Efrat are seen on the hillside overlooking a Palestinian village near Bethlehem, West Bank, May 10, 2020. The Vatican issued a statement May 20 stating concerns about an Israeli plan to unilaterally annex a large portion of land in the West Bank. (CNS photo/Debbie Hill)

VATICAN CITY (CNS) — The Holy See is concerned about an Israeli plan to unilaterally annex a large portion of land in the West Bank, said a Vatican statement.

“The Holy See is following the situation closely and expresses concern about any future actions that could further compromise dialogue,” said the statement released May 20.

Erekat, it said, wanted “to inform the Holy See about recent developments in the Palestinian territories and of the possibility of Israeli applying its sovereignty unilaterally to part of those territories, further jeopardizing the peace process.”

Israeli Prime Minister Benjamin Netanyahu and opposition leader Benny Gantz reached an agreement to form a coalition government, and Netanyahu was sworn in again as prime minister May 17. He had promised to bring a proposal to the full government as early as July 1 to annex the land on which some 130 Jewish settlements are built in the West Bank, settlements the U.N. Security Council has declared a “flagrant violation” of international law.

The Vatican statement said, “The Holy See reiterates that respect for international law and the relevant United Nations resolutions is an indispensable element for the two peoples to live side by side in two states, within the borders internationally recognized before 1967.”

The Vatican also expressed “its hope that Israelis and Palestinians will be soon able to find once again the possibility for directly negotiating an agreement, with the help of the international community, so that peace may finally reign in the Holy Land, so beloved by Jews and Christians and Muslims.”

NEXT: In Italy, signs of rise in prayer, religious fervor amid pandemic