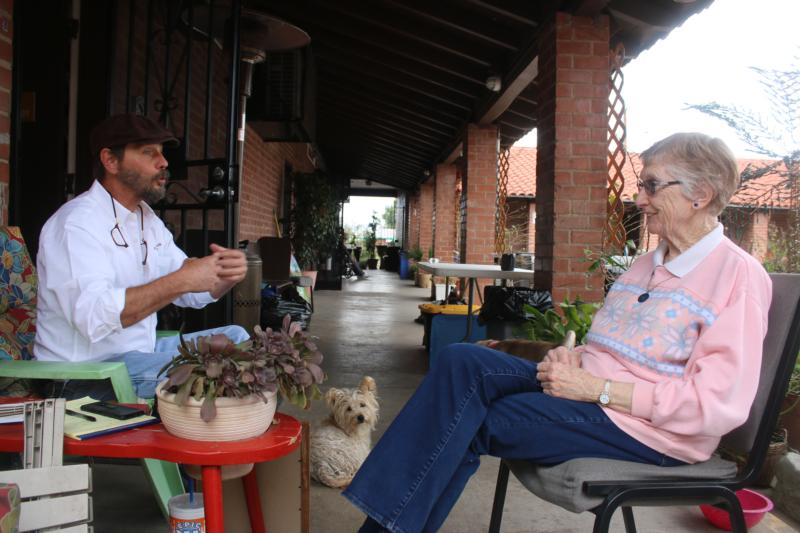 TUCSON, Ariz. (CNS) — Carl Zawatski, a son of Philadelphia, sits back in a lawn chair that has seen better days. He is a straight shooter, occasionally dropping in a word or two that shouldn’t appear in a newspaper.

He works hard, laughs easily and starts to tear up when he talks about the death of a friend or a letter from Pope Francis.

As the executive director of St. Francis Shelter for homeless men, Zawatski is the perfect, unlikely leader and spiritual son of St. Francis of Assisi — he is a lay Franciscan — to run the facility that in five years has grown from a 30-day trial period at Sacred Heart Parish in Tucson, to the cusp of an expansion aimed at helping the homeless in Tucson year-round.

“If it’s 20 degrees out there and it’s raining, they should have a place to stay,” Zawatski said in a March interview.

The shelter, which is on parish grounds, is open seven days a week, December to February, from 8 p.m. to 6 a.m. In the summer, it is open as “cooling center” during the day.

It is a “low barrier” shelter, which means that no one is required to take a drug test or sobriety test to be admitted. Drinking alcohol and drug use is prohibited on the premises.

Residents get a “good meal” right after checking in, Zawatski said. “The Community Food Bank helps us with our meals,” along with other groups, he noted. Lights go out at 10 p.m. and come back on at 5 a.m. The residents get a cup of coffee, a light breakfast and a bag lunch before leaving the property at 6 a.m.

Sister Jerry Brady, a Sister of Charity of St. Elizabeth, leads the staff of the shelter in morning prayer two days a week, but also is a spiritual mother. At 73 and having spent the last 25 years serving Sacred Heart Parish — where the shelter resides — Sister Jerry knows that she could be recalled to her motherhouse in Convent Station, New Jersey, at any time.

Her wish is to stay at the parish and minister in the shelter for as long as possible.

It was she who surrendered a religious education classroom to the first five to 10 men nearly six years ago. Then, it was classroom after classroom until the 2019-20 season, when the growing ministry gradually fills the facility with up to 95 people a night.

In mid-March, life changed when Arizona Gov. Doug Ducey ordered a shutdown of all nonessential businesses because of the COVID-19 pandemic. The shelter’s thrift store shut down.

The thrift store represents the prime source of revenues for the shelter, which provides a small stipend plus room and board for the staff — about a dozen men who work and live there full time. Donations also dried up.

In a mid-May interview, Zawatski said he got a sinking feeling when he saw there was only $350 left in the shelter’s checking account.

Then, help came from an unexpected source.

Last year, Father William Nordenbrock, then moderator general of the Missionaries of the Precious Blood, had visited the St. Francis Shelter last year, helping a vision and mission statement for the facility. He applied for a $5,000 grant from his religious order for the shelter.

Zawatski said that help will keep the shelter community viable for another six weeks.

But there was more. In a letter with the grant was a personal check for $1,200.

“He made me cry, not only from the cash but what he told his order what he saw,” Zawatski said, “about seeing the Gospel come alive here.”

The shelter survives because of community support, Zawatski said. It started when he first approached the previous pastor at Sacred Heart with the request to open the shelter in 2014. The parish is located in Tucson’s Amphi neighborhood, where the crime rate is nearly 2.5 times the city average.

The shelter’s staff members earn their pay in various ways: They patrol the parking lot during Mass and provide overall security for the parish. They assist with maintenance at the sprawling Sacred Heart complex and provide landscaping services locally. They operate a thrift store and occasionally cater events using the full-service kitchen they installed courtesy of local donations.

Zawatski draws a small disability check. He served in the Vietnam War and was diagnosed with post-traumatic stress disorder.

The goal of St. Francis Shelter is to “keep a Franciscan charism, which first means hospitality, and then to turn the other cheek whenever possible.”

The men who come there during the winter don’t mind the shelter’s spartan accommodations. They appreciate the cots, Kool-Aid and a chance to stay warm on cold winter nights. Once in a while, they even get a treat — like ice cream.

“They are just so grateful for the littlest things,” Zawatski added.

It’s a refuge for men like Enzio, who works in the thrift store and lives in the parish office — the former convent. He was married, but his wife left him. When a roommate he was living with died, it left him, his 10-year-old son and his dog, Athena, living on the streets. He gave up his son so the boy could get shelter and services.

One winter night, it was so cold outside that Enzio went to the police looking for help because Athena was freezing to death. The police brought him to St. Francis.

Working with Zawatski and other people at the shelter, Enzio said he has been able to get his life “back on track.”

“It’s been a pretty rough road, but in a month, I’ll have my family together again,” he said.

When COVID-19 forced the schools to close, his son was allowed to move in with him. At the end of May, Enzio was able to have full custody of his son. And he still has Athena with him. 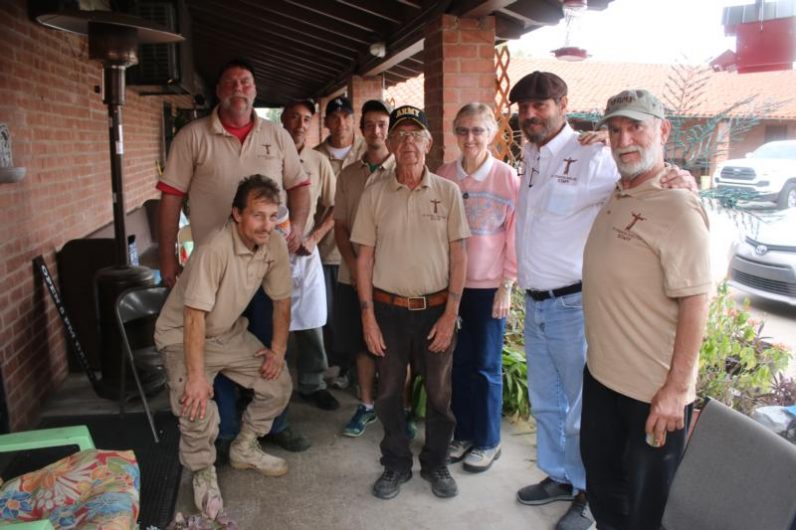 Staff members of St. Francis Shelter, all of whom were originally clients of the shelter in Tucson, Ariz., pose for a photo March 10, 2020. Also pictured are Carl Zawatski, director at St. Francis Shelter, second from right, and Sister Jerry Brady, a Sister of Charity of St. Elizabeth. (CNS photo/Michael Brown, Catholic Outlook)