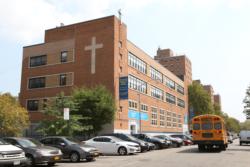 Our Lady Queen of Angels School in the East Harlem section of New York City is seen in this 2015 file photo. Financial fallout from the COVID-19 pandemic is causing numerous Catholic schools to close. (CNS photo/Gregory A. Shemitz)

(CNS) — More than 100 Catholic elementary and secondary schools nationwide are expected to close by the fall, largely because of financial challenges resulting from the coronavirus pandemic and the resulting economic recession.

“Nearly every diocese probably is facing a closure. While we don’t have it in stone, we think the closures as we speak are 100 to 150 schools,” Mary Pat Donoghue, executive director of the Secretariat of Catholic Education at the U.S. Conference of Catholic Bishops, said June 12.

Margaret Kaplow, public relations manager at NCEA, said June 12 the association had compiled information showing that at least 97 schools are closing. The number is based on official announcements, media reports and conversations NCEA officials have had with diocesan school superintendents, she said.

Education leaders expect more announcements of closures in the coming weeks as parents who have lost jobs under the shutdown of large portions of the economy because of the pandemic decide they can no longer afford Catholic school tuition.

“A lot of people (in education) are holding their breath that families may not be able to swing it or choose not to swing it in a time of uncertainty,” Donoghue told Catholic News Service.

“Everything is in such a state of flux,” Sister McDonald agreed. “A lot of schools still don’t have their (enrollment) information together. The registration period and re-registration is late March to April, when they ask you to commit again. That didn’t happen. In addition is the whole tuition piece with people unemployed.

The NCEA’s annual statistical report of Catholic elementary and secondary schools for 2019-2020 showed there were 6,183 schools with 98 schools consolidated or closed. Enrollment for the academic year stood at more than 1.7 million.

Catholic school enrollment peaked in the early 1960s with more than 5.2 million students in nearly 13,000 schools.

The focus of the USCCB Catholic education secretariat and NCEA is on keeping schools open.

“For the parishes, the loss of a school is the loss of vitality. This is a huge concern especially as the nation goes through so much upheaval as it goes through the pandemic and the killing of George Floyd,” Donoghue said.

The most difficult questions remain for blue collar and low-income families, which have been the most seriously affected by layoffs.

Donoghue credited federal aid under a pair of emergency relief bills passed early in the federal response to the pandemic-caused economic crash as helping some schools stay open. She said the Paycheck Protection Program in particular, which allowed small businesses and schools to receive forgivable loans to keep employees on staff for up to eight weeks, “probably will keep the number of closures from being worse than it is.”

The USCCB ad NCEA also have been advocating within the Department of Education to ensure that provisions for school aid in the $2.2 trillion Coronavirus Aid, Relief, and Economic Security Act, or CARES Act, are carried out, Donoghue said.

In addition, educators are urging Senators to include a provision in any future emergency aid legislation that would provide direct assistance to families for tuition expenses or tax incentives that can be used for tuition. Donoghue said either provision would assist parents in keeping their children in nonpublic schools.

Such aid was left out of the $3 trillion tax cut and spending bill called the Health and Economic Recovery Omnibus Emergency Solutions Act, or HEROES Act, passed by the House of Representatives in May. The bill also rescinds funding of equitable services to nonpublic schools, including Catholic schools, that had been established in the CARES Act.

Sen. Mitch McConnell, R-Kentucky, the Senate majority leader, has said the bill would not be taken up in the chamber. Republicans are undecided on whether to adopt another aid package, choosing for the time being to see how the economy recovers as shutdown orders are reversed.

“We’re certainly doing everything we can to shore up the ability of parents and families to stay connected to the Catholics schools,” Donoghue said.

Meanwhile, as diocesan school superintendents confront the enrollment uncertainties, they also are faced with having to assist school administrators plan for different scenarios: the full reopening of schools with costly safety measures in place; the continuation of remote learning; or a hybrid that includes some classroom work combined with online classes from home.

Those costs alone would tax nearly every Catholic school. Add on the cost of protecting student and staff safety through social distancing, providing personal protective equipment, and near-constant cleaning and sanitization, and schools could be forced to make the difficult decision to close, Donoghue said.

“We’re quite concerned that schools are not going to have what they need financially to provide the quality education that we’re committed to providing,” Sister McDonald said.

NCEA has developed a series of online programs for school administrators addressing such needs. The programs will continue through the summer.

“We just don’t know what the next step is,” Sister McDonald added, “and we’re trying to be prepared for everything.”

NEXT: No evidence found of improprieties by national shrine rector