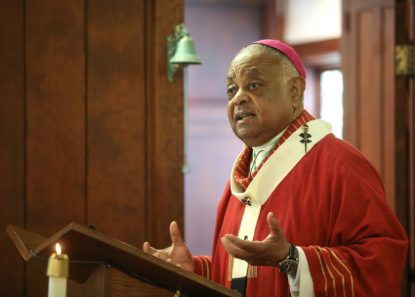 WASHINGTON (CNS) — Archbishop Allen H. Vigneron and the Archdiocese of Detroit in a June 11 statement condemned “racist and derogatory” language used by a fringe organization located in the archdiocese that bills itself as Catholic and posted a video calling the archbishop of Washington an “African Queen,” saying he is an “accused homosexual.”

“The Archdiocese of Detroit has been made aware that an organization located in southeast Michigan has published racist and derogatory language in reference to Archbishop of Washington D.C. Wilton D. Gregory,” the archdiocese said a statement referencing Church Militant/St. Michael’s Media in Ferndale, Michigan. “The organization in question is not affiliated with or endorsed by the Archdiocese of Detroit.”

The video disparages the Washington archbishop, who is black, and calls him a liar.

Archbishop Vigneron also individually issued a statement saying that “racist and derogatory speech wrongfully diminishes the God-given dignity of others. It is not in accord with the teachings of Christ. As our nation continues its important conversation on racism, it is my hope that the faithful will turn from this and all other acts or attitudes which deny the inherent dignity shared by all people.”

The Southern Poverty Law Center has listed the group as an “anti-LGBT” hate group, a charge the organization has denied. The center says it also “demonizes” gay people even as one of its male members has admitted past relationships with other men.

On Twitter, Bishop Richard F. Stika of Knoxville, Tennessee, also called out the group June 11, saying it was “not a Catholic organization,” adding that “they lead others to sin by their often vile comments which led their minions to verbally attack, curse and threaten my switchboard operator but now it seems they are also filled with racial hate.”

The organization in the past used the the name “Real Catholic TV” for the videos it produces, but the Archdiocese of Detroit told the group it did not have permission to describe itself as Catholic. And though it also bills itself as a news organization, it has been denied membership by the Catholic Press Association.