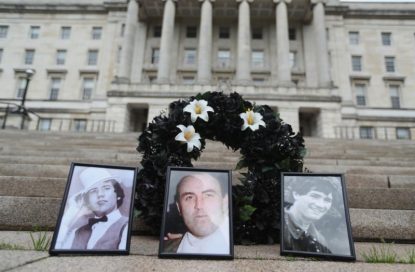 In this 2017 file photo, a wreath and photographs of the three men whose remains are yet to be recovered are seen during the 11th annual “Silent Walk for the Disappeared” to remember victims of Northern Ireland’s Troubles. (CNS photo/Brian Lawless, PA Images via Reuters)

WASHINGTON (CNS) — The U.S. demonstrations over police aggression toward minorities has an antecedent in Northern Ireland, according to a police commander in Salinas, California, who spent the first 10 years of his life in Northern Ireland in the midst of “the Troubles” there, then later wrote his master’s thesis on the applicability of its policing reforms to the United States.

There are differences, though, according to John Murray, a Catholic.

“The current U.S. movement can be seen as a part of a disenfranchised community’s legitimate long national struggle to deliver on the promise of America’s founding,” Murray told Catholic News Service in a June 12 email. “The Irish struggle was and is part of a long fight regarding who ruled the Irish people and by what right; it can be seen as a continuation of the Irish Revolution.”

In a phone interview with CNS, also June 12, Murray said he can remember being told that the Royal Ulster Constabulary were “not your friends” by his Irish Catholic father, who served in U.S. Army, earning U.S. citizenship before he married. This allowed Murray, his brother and his parents to emigrate to the United States as citizens.

Despite the instruction from his father, Murray, now 48, felt an attraction to police work and joined the Salinas police force after serving in the military himself.

“The calls to disband the Minneapolis police force,” which have grown in intensity after the May 25 death of George Floyd while in police custody there, are “very similar to what happened in Northern Ireland,” Murray told CNS. “That was a bone of contention in the (Good Friday) agreement (of 1998). There were a lot of people who had legitimate complaints of injustice that saw justice fail to be carried out when they saw members of the RUC become members of that Police Service of Northern Ireland.”

The name change was necessary, Murray added in his 2017 thesis for the Naval Postgraduate School, “Born of the Troubles: Lessons in Trust and Legitimacy From the Police Service of Northern Ireland.” Christopher Patten, the British diplomat who headed a commission on forging a post-peace pact future for Northern Ireland, saw it as well.

The RUC had been formed after the Easter Rebellion of 1916 that partitioned the Emerald Isle into the Catholic-majority Republic of Ireland and Protestant-majority Northern Ireland, still subject to the English crown. The RUC originally had Catholics account for about 30% of its members, Murray said in his thesis, but loyalists dismissed them all, deepening antagonism between Catholics and Protestants.

Murray said he became aware of his own “outsider” status in Salinas, which has about 150,000 people, about 78% of them Hispanic, when he spent four years in the late 1990s in the police’s gang unit.

“It was a slow evolution,” he added. “Early on, I started to see things that reminded me of my own experience in Ireland, and seeing parents tell their children that cops are not your friend. I realized they were seeing us as outsiders. I don’t know if I would have used that language then, but they were looking at us as an occupying force.”

When Murray started, the police department was overwhelmingly white. Today, he says, the department is 83% male and is 45% white, 44% Hispanic, 1% African American and 9% “other” — mostly Asian and Pacific Islander.

“Police Service of Northern Ireland” was a conscious choice for the reorganized police force’s name. So was the design for the badge worn by its officers. “Symbols matter,” Murray said. Gone was the crown atop the harp, which Catholics regarded as representing the subjugation of its people. In its place was a badge with six symbols, the top one being the scales of justice representing equal justice under law, he added.

In his thesis, Murray offered a series of suggestions the police in Salinas could adopt. One of them was changing the name on its headquarters building. When a new building was ready for occupancy, its bore the name “Police Service of Salinas.”

Murray said he sees another connection between the U.S. and Northern Ireland protests with the self-proclaimed “Capitol Hill Autonomous Zone” in Seattle and a “Derry Free Zone” in Northern Ireland during the Troubles.

“I believe they are telegraphing their admiration for the long violent struggle in Northern Ireland,” Murray said. “In Derry, the British government and RUC responded with a display of hard power including the use of British regular soldiers. Individual grievances derived from personal injustices, or by vicarious experience, added to political grievances to exacerbate intergroup conflict.”

Thus far, the strongest display of power since protests started in U.S. cities was the forcible clearance of peaceful but vocal demonstrators June 1 from Lafayette Square in Washington across the street from the White House by the National Guard and U.S. Park Police so President Donald Trump could pose with a Bible outside St. John Episcopal Church, which also is across the street from the square.

“There’s plenty of room for police reform in this country, but I think the police at times are uncomfortable with the word ‘reform,'” Murray said. “I often present it this way: Policing is a profession, it is an industry; it has to advance. No industry is ever successful by remaining in a state of stasis. It’s how you best serve your customers. Our customers are the community.”

Reform, “in the current situation, it’s part of an indictment of policing. … but it’s a part of the profession, part of a better way of doing things,” he added. “A lot of the arguments about defunding the police — money going to social services — I think we can do more than one thing at the same time.

“As we saw in the Great Recession, a lot of us had our budgets reduced. One of the things that goes first is training. You have to pay the officer’s salary while you’re training. But then you have to backfill — you have to pay existing officers on the street.”