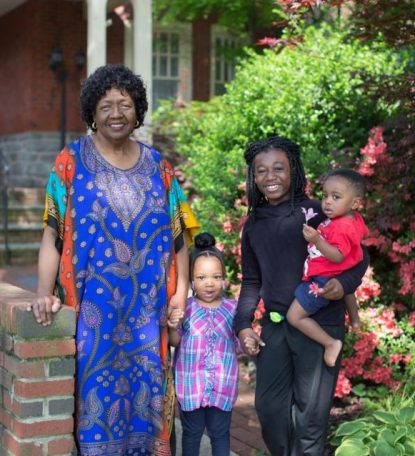 Sharonell Fulton, a foster parent in Philadelphia, is pictured with a young woman and children in a May 23, 2018, photo. The U.S. Conference of Catholic Bishops and other Catholic entities have urged the U.S. Supreme Court to protect Philadelphia’s faith-based foster care in a decision expected this June. (CNS photo/courtesy Becket Religious Liberty for All)

WASHINGTON (CNS) — The U.S. Conference of Catholic Bishops, the Pennsylvania Catholic Conference and a few Catholic Charities agencies have joined more than 30 other religious groups, states and a group of Congress members urging the Supreme Court to protect Philadelphia’s faith-based foster care.

The groups filed friend-of-the court briefs in early June in Fulton v. Philadelphia, which the court will hear next term to determine if Philadelphia can exclude a Catholic social services agency from the city’s foster care program because the agency does not accept same-sex couples as foster parents.

The briefs argued that the court should allow the city’s Catholic social service agency to continue its foster care role and protect faith-based ministries nationwide to ensure they maintain their First Amendment religious exercise rights.

In 2018, Philadelphia stopped using the foster program of Catholic Social Services of the Philadelphia Archdiocese because of the agency’s policy of not placing children with same-sex couples stressing that these unions go against church teaching on traditional marriage. A year later, the U.S. Court of Appeals for the 3rd Circuit sided with the city, calling the agency’s policies discriminatory.

In its brief in support of the Philadelphia Catholic agency, the USCCB, joined by the Pennsylvania Catholic Conference, said Catholics have been involved in caring for the orphaned since the early church and in the beginnings of the church in America.

“This history, and the theological basis that animates it, together make clear that providing foster care represents a core religious exercise for Catholics,” it said.

The brief also said this ministry “serves the common good and is often carried out in cooperation with government” but that does not reduce the work to a “public function picking up garbage or paving roads. ”

A brief by the Catholic Association Foundation, a group which defends the church and religious liberty, said severing ties with Catholic-run foster care and adoption programs, “under the guise of enforcing ‘neutral’ anti-discrimination laws, is the equivalent of hanging a ‘Catholics Need Not Apply’ sign outside of every state and local health and human services department.”

Other Catholic Charities agencies similarly weighed in, including Illinois agencies, which stressed that when Illinois similarly canceled participation in the state’s foster care program after more than 40 years of involvement, it “harmed Illinois children contrary to its duty to act in their best interest.”

“The lesson should be clear: The court should respect and accommodate the free religious exercise of faith-based agencies because to do so does not conflict with the interest of same-sex couples to become foster parents and, on the other hand, is necessary to prevent harm to children in need of high quality foster care,” the agencies aid.

They also pointed out that the court can “support each of these values without sacrificing any” of them and that to do “anything else would be to encourage more initiatives to force faith-based providers of critically needed services for vulnerable children to abandon their religious practices in order to gain the state’s permission to continue to provide such care.”

In 2011, the Catholic bishops in Illinois announced they were dropping their lawsuit against the state for requiring Catholic Charities agencies to provide their services to same-sex couples. The agencies also ended their adoption and foster care programs.

At issue was the agencies’ long-standing practice of referring prospective adoptive and foster parents who are cohabiting — regardless of sexual orientation — to other agencies or to the Department of Children and Family Services. The state interpreted the policy as discriminatory to same-sex couples under the new Illinois Religious Freedom Protection and Civil Union Act, and a Sangamon County Circuit Court judge ruled Sept. 26 the state could begin canceling its foster care and adoption contracts with Catholic Charities.

In other briefs filed in support of the Catholic agency in Philadelphia, 13 states asked the court to protect the partnership of government and religious ministries, and a group of three states stressed the long-standing, historical dependence on religious foster ministries by state and local governments.

A group of 76 members of Congress asked the Supreme Court to protect faith-based agencies and stop Philadelphia’s attempt to “quash” child welfare providers that have different religious beliefs than those the government prefers.

A coalition of minority religious groups, including the United Sikhs, the Bruderhof Communities and the Islam and Religious Freedom Action Team, also urged the court to protect religious exercise saying the outcome of this case will affect other actions based on religious beliefs.

Becket, a religious liberty law firm, is representing the foster women defending the Catholic Social Services policy. The case takes its name from Sharonell Fulton, a foster parent who joined in the lawsuit against the city along with another foster parent, Toni Simms-Busch.