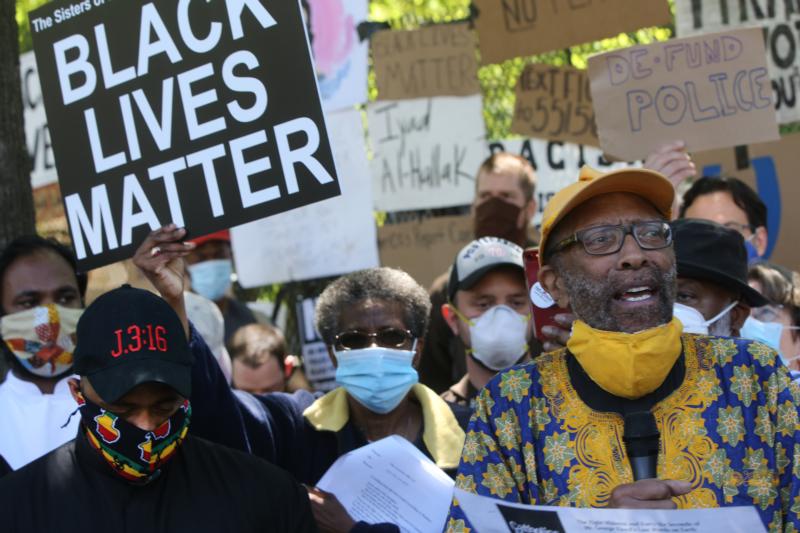 Msgr. Ray East, pastor of St. Teresa of Avila Catholic Church in Washington, speaks during a prayerful protest outside the White House June 8, 2020, following the death of George Floyd, an unarmed African American man whose neck was pinned to the ground by police for more than eight minutes before he was taken to the hospital. (CNS photo/Bob Roller)

WASHINGTON (CNS) — The streets in front of the White House of late have been filled with thousands of youthful faces carrying signs or wearing T-shirts calling for racial justice, with fists raised in the air, or posing for selfies with a large “Black Lives Matters” sign.

That sign now hangs on a tall piece of fencing meant to keep the protesters out of Lafayette Park, the place tourists would usually flock to and have their pictures taken with the iconic building in the background.

But on June 8, the space was filled with women and men religious donning their habits and priests with Roman collars; some carried rosaries and signs with Our Lady of Guadalupe and the image of St. Oscar Romero. And hundreds of laity and at least two bishops from the Archdiocese of Washington joined in the Catholic-centered protest.

“The Catholic voice as a group, as a family needs to be heard,” said Father Cornelius Ejiogu, a member of the Society of St. Joseph of the Sacred Heart, best known as the Josephites. He, along with others, helped organize the event. “I know a lot of priests and sisters have come out here individually to pray for peace and justice, but we feel that our church, as one, can come together.”

Washington Auxiliary Bishops Roy E. Campbell and Mario E. Dorsonville attended the event that featured prayer, songs and Bible readings and a reading of names of black Americans who died in violent acts of racial injustice, most recently George Floyd,

His May 25 death, while pinned to the ground by a white Minneapolis police officer seen in a video pressuring his neck with his knee for almost nine minutes, sparked protests, not just in the U.S., but in other parts of the world.

Father Ejiogu said retired Bishop John H. Ricard of Pensacola-Tallahassee, Florida, who lives in Baltimore where he is the superior general of the Josephites, did attend the event.

The crowd prayed for those whose names were called out but also for “those who have died and whose names we don’t know,” said Father Ejiogu. The event was to pray for justice and peace “and ask God for reconciliation,” he said.

“What we’re seeing these past couple of weeks … it’s not the nation that we want, the America we believe in,” he said in an interview with Catholic News Service. “America is torn up by pride and racism and injustice. So, we want to use this opportunity to ask God to reconcile us.” 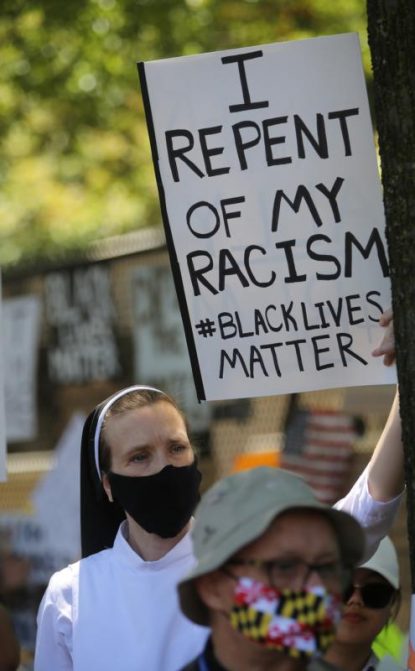 A woman religious holds a placard as she takes part in a prayerful protest outside the White House in Washington June 8, 2020, following the death of George Floyd, an unarmed African American man whose neck was pinned to the ground by police for more than eight minutes before he was taken to the hospital. (CNS photo/Bob Roller)

Catholics have joined the throngs of protesters who have taken to the streets of Washington since the killing of Floyd, but the event was a hope to unify Catholics to recognize the injustice behind the killings, he said.

“So, we are saying that those folks who are disenfranchised, those folks who are experiencing racism more, their lives matter along with all lives,” he added. “So, it’s not a question of separation, no. We’re asking God to heal us so we can recognize that we’re all brothers and sisters.”

He said he recognized that not all Catholics agreed with what the group was setting out to do.

One of them was Maryanne Pennell, from Front Royal, Virginia, who was carrying a “Trump Pro-Life” sign near the group. “I’m here so say pro-life is what matters,” she said. “All people, not based on your skin or your nationality or your history, based on being an American or being in America.”

What is needed is more dialogue, she told CNS, and she was doing her share of it, peacefully speaking with others who, curious about her sign and defense of President Donald Trump, stopped to talk to her.

Of course black lives matter, “but all lives matter, beginning with the unborn,” she said, adding that she believed no other president had done as much as Trump for the pro-life cause.

“I’m here to say Mr. Trump has given us a voice for life,” she said. “He has stood for life and for the Constitution of the United States.”

But to those like her, Father Ejiogu said, he just wanted to say that “we’re simply here to pray and to call on our Blessed Mother of the church, the saints, to help us to heal so that we can recognize that black lives matter, white lives matter, Spanish lives matters, Asian lives matter, all lives, yes, but there are a few of those lives that seem to feel that they do not matter. That’s all we’re calling for.”

Darwin Kemp, a member of the Knights of Columbus in Washington, said he attended because, like, others, “people are sick and tired of the injustice.”

Now it’s time to do so as group, he said, because racism needs to end.

“I hope that we all come together as one and be able to sit down, have a conversation, even if we agree to disagree, at least we’re having a conversation and actually getting some things done,” he said. “Get rid of racism. It’s been around too long.”

Sister Nancy Conboy, of the Franciscan Sisters of the Atonement, said she attended in solidarity with others, but also to affirm church teachings that say that “as Catholics, we really believe in equality for all people and we thought it was important to come down and take part in this service.”

“We really believe in the dignity of every person,” she said. “We just thought it was important to come down and show support and solidarity with our brothers and sisters. It’s true that all lives matter but I think in our country, we have a history of racism so that’s important that we recognize that.”

Though not everyone would agree with the event, said Father Ejiogu, he would continue to pray for unity on the issue within the church as well as outside of the church.

“I can’t tell God what to do but I can ask,” he said. “What I’m asking God with my friends, families and parishioners who are helping organize this, I’m praying to God to heal us. That’s all we can do is pray for healing and hopefully God will heed our petitions and answer, and our country may be much better than it is because simply sitting at home doing nothing just doesn’t cut it for me.”

Along with the hundreds of who joined the peaceful protest, which took a route from the White House fencing and ended at the National Museum of African American History and Culture, he chanted and prayed into the distance.

He said the images that most have given him hope, even in the midst of the tense protests, were of the young white, black, Asians, Latinos, “people of all colors coming out and peacefully protesting.”

“That’s the image that stood out for me,” he said.

And despite what others may say of the protesters, he wanted to portray the Catholic angle of it, “speaking truth to power and doing it in a more prayerful way,” he said.