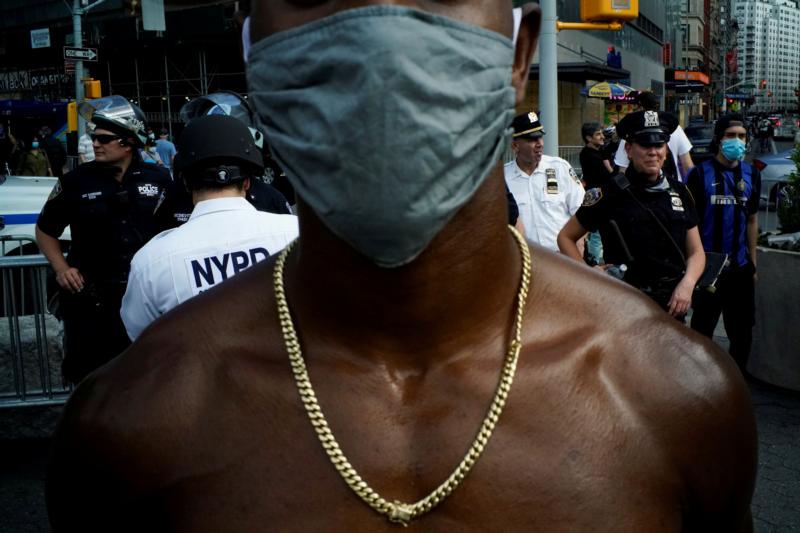 A demonstrator in New York City is seen June 4, 2020. Demonstrations continue after a white police officer in Minnesota was caught on a bystander's video May 25 pressing his knee into the neck of George Floyd, an African American, who was later pronounced dead at a hospital. (CNS photo/Eduardo Munoz, Reuters)

CLEVELAND (CNS) — There have been times, said Father Bryan Massingale, who is black, when he has been invited to a parish or school to speak about racism and is asked how to enter such a conversation “in a way that doesn’t make white people uncomfortable.”

“When they asked that question, I say ‘Let’s pause … and think about that question,” Father Massingale, professor of theological and social ethics at Fordham University, said in an online discussion June 4. “Why is it that the only group that’s never supposed to feel uncomfortable when in a discussion about race are white people?”

“The presumption is that we should be able to talk about this issue in a way so that white people are never made to feel uncomfortable and can leave the conversation at the end of the day and feel good about themselves,” he continued.

“That’s the biggest mistake I think the Catholic Church has made,” he said in a program sponsored by the justice advocacy group Faith in Public Life.

Segura, who is African Dominican, and Father Massingale offered broad insight into how they believe the church has failed to fully address racism. They encouraged viewers to approach their pastors to raise the issue of racism if it is not being addressed in church programs or periodically from the pulpit at Sunday Mass.

Both speakers called racism a pro-life issue that must be addressed with the same passion and vigor that the Catholic Church brings to the public square when it speaks about abortion.

They echoed Pope Francis’ words during his June 3 audience in Rome in which he said, “We cannot tolerate or turn a blind eye to racism and exclusion in any form and yet claim to defend the sacredness of every human life.”

The pope was speaking in support of the nationwide demonstrations in the U.S. that have emerged since the May 25 death of George Floyd while being pinned to the ground by a Minneapolis police officer. The pope also decried the violence that paralleled demonstrations in some locales.

Segura said the protests have demonstrated “what it means to be fully pro-life and in solidarity with each other.”

Unfortunately, she added, the definition of “pro-life” has been narrowly interpreted by many Catholics as being against abortion. She said she has looked into the backgrounds of some of the protest leaders and learned they are being guided by their faith to address injustice.

That the protests are in part stemming from a deep commitment to justice from a faith perspective. Segura said, gives her hope even though the tasks ahead post overwhelming challenges.

For too long, he continued, people and clergy within the church have framed the definition of being pro-life “around the very narrow meaning of being anti-abortion,” allowing people of faith to give political leaders “a pass” on other issues of social justice including poverty, criminal justice reform, mass incarceration, and access to health care and affordable housing that go unaddressed and disproportionately harm people of color.

“It’s high time to stop this fiction that we can be racist and support policies that are detrimental to people of color and yet still see ourselves as pro-life,” he said.

Father Massingale also said he would like to see more priests and bishops joining the current peaceful demonstrations for racial justice to the same extent that they have readily been part of the annual March for Life in Washington to protest the 1973 U.S. Supreme Court decision that legalized abortion.

Segura noted how women religious have been doing behind-the-scenes work to promote racial justice for years. Agreeing with Father Massingale, Segura called on white Catholics and white Catholic leaders to join the current wave of demonstrations.

Having “visible leaders in their collars” would show “this is a this is a religious and spiritual challenge, that it’s not simply a political issue,” Father Massingale added. “That’s something the civil rights movement (of the 1960s) taught us, that one of the reasons it was so successful is that it’s a moral issue and a religious issue. And when bishops show up, not to take over, but to be there in solidarity, it shows that this is a key element of Catholic faith.”

Such work is not easy, acknowledged Segura, author of the forthcoming book “Birth of a Movement: Black Lives Matter and the Catholic Church.” She said that black and brown people need the support of the white community to achieve true equality. The work ahead will not be easy, she added.

NEXT: Knights ask Catholics to pray novena for national unity, end to racism