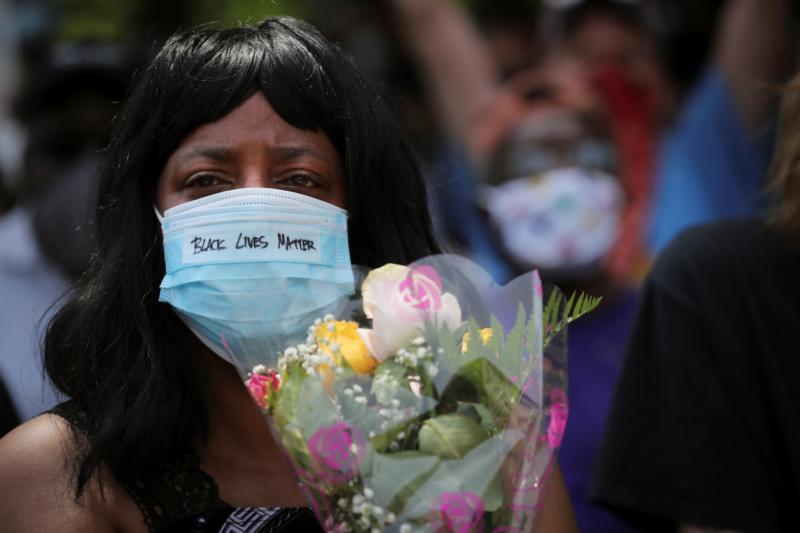 A woman in New York City is seen at a public memorial for George Floyd June 4, 2020. Demonstrations continue after a white police officer in Minnesota was caught on a bystander's video May 25 pressing his knee into the neck of George Floyd, an African American, who was later pronounced dead at a hospital. (CNS photo/Jeenah Moon, Reuters)

ST. PAUL, Minn. (CNS) — Amid the turmoil following George Floyd’s death in Minneapolis, Archbishop Bernard A. Hebda said the Catholic Church must proclaim the Gospel message of Jesus’ love for all people, as well as its teaching on the dignity of human life.

The church also can provide a way for people to process what they are experiencing, in the Twin Cities and beyond, after Floyd’s death, including anger or fear, the archbishop said.

The events since Floyd’s May 25 death while he was pinned to the ground by a Minneapolis police officer have revealed countrywide concern and anger about racism “that was just below the surface,” he said.

“Until we address the underlying wound, it’s not going to go away,” Archbishop Hebda told The Catholic Spirit, newspaper of the Archdiocese of St. Paul and Minneapolis, June 1. “And so it (racism) is something we have to really address head-on, but in a way that brings to bear the light of Christ, which is hopeful even in addressing painful situations.”

Watching Floyd’s death while he was handcuffed and face down on the ground begging to breathe was “shocking that there could be in anybody’s heart such an absence of concern for human life,” Archbishop Hebda said.

As the archbishop has reflected on the incident, the more discouraging it has become, he said. But, he added, it also highlights the need for the church to share the Gospel.

“I certainly understand the anger people are feeling, especially since this isn’t the first time our community has experienced something like this,” he said. In the last five years, police were involved in the shooting deaths of two other black men: Jamar Clark in 2015 and Philando Castile in 2016.

However, even when people experience righteous anger and long for justice, they are still called to love their brothers and sisters, Archbishop Hebda said.

“I think for so many people, that anger has clouded that. And so when we see the destruction in our cities, that’s a clarion call for us to make Jesus’ good news present in a way that’s compelling and then brings people to a new perspective,” he said.

While rioting overwhelmed parts of Minneapolis the day after Floyd’s death, necessitating deployment of the National Guard by Minnesota Gov. Tim Walz, peaceful protests also have taken place throughout the days and nights since then. A memorial service for Floyd was held in Minneapolis June 4, and his body will be returned to Houston, where he was raised, for additional memorial services and a funeral.

Archbishop Hebda lives at a rectory in St. Paul. In a community that may now be without access to public transportation and groceries, he has witnessed acts of kindness toward his neighbors: young people with push brooms uniting to clear rubble and broken glass, bags of groceries donated for distribution, a pallet with carrots and pears set out for the taking.

“The generosity is phenomenal. It brings that ray of Christian hope into a bleak situation,” he said.

The archbishop and Auxiliary Bishop Andrew H. Cozzens have been in touch with the priests whose communities were most affected by the rioting, listening to their experiences and their parishioners’ stories. Prayer services have been held at churches and the Cathedral of St. Paul as well.

On June 2, Archbishop Hebda joined other Catholic priests and Twin Cities clergy for marches in Minneapolis and St. Paul, both led by clergy of color.

The local church will renew its effort to address racism in society and the Catholic Church, Archbishop Hebda said. He pointed to two documents to guide those conversations: the U.S. Conference of Catholic Bishops’ 2018 document on racism and a 2003 pastoral letter written by Archbishop Harry J. Flynn of St. Paul and Minneapolis.

Efforts have also been underway in recent years to revive a black leadership initiative. “That is an area of interest, and we have been encouraging those discussions to take place in the black Catholic community,” he said. “In my mind, it’s important for us to move forward.”

Racism “is certainly pervasive in society,” he said, “and even though I would love to say it has no place in the church, we know that we bring our humanity to the pew. And that’s where the Lord has that chance to transform us.

“But we recognize that the church has talked about racism being such a great sin, and there is an acknowledgment that it has had its impact in the church. And for us to be really intentional about addressing that, I think it’s a no brainer.”

NEXT: Online forum examines racism being as much a pro-life issue as abortion