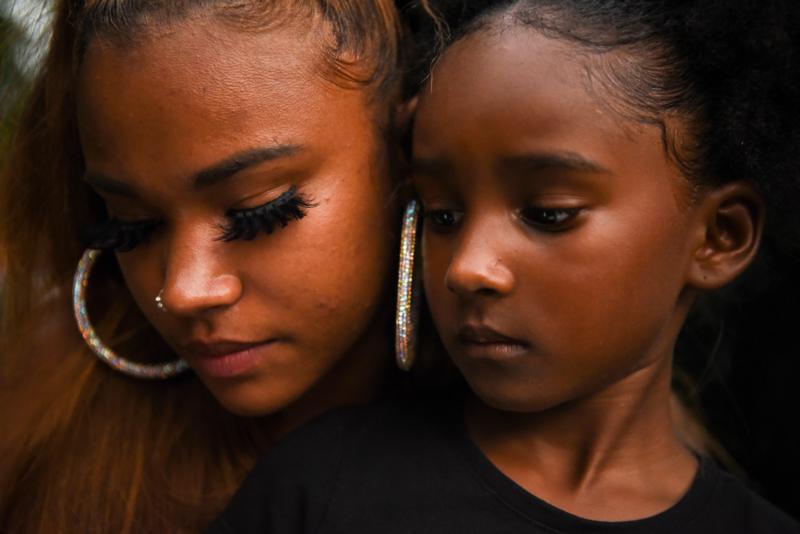 People are seen in Houston June 19, 2020. The date, known as Juneteenth, honors the end to slavery in the United States and is considered the longest-running African American holiday. (CNS photo/Callaghan O'Hare, Reuters)

WASHINGTON (CNS) — As solidarity around the death of George Floyd and police brutality in America grows, young people all over the world continue to join together, their efforts for social justice arguably a spiritual mission.

For those that do not know where to start, Allison Benders, interim dean at the Jesuit School of Theology of Santa Clara University, has set a precedent for starting with an apology.

Benders put out such a statement on behalf of the university, recommitting the institution to its mission for equality.

“The reason why I felt we had to make this statement is we have to be a part of the world, and this is what’s going on in the world,” said Benders in an interview with the Catholic News Service. “It was an apology for taking so long to get and empathize and align with the suffering of Black Americans.”

As an educator committed to exposing students to the realities of our nation’s system, the theologian explained, “Thinking about (Catholicism), it’s about the sacrament of reconciliation. It’s the examination of conscience, the acknowledgment of one’s own guilt, whether it’s silence, complicity, the rude things we say, whatever that has been. And the commitment to do better. Without actually apologizing, we don’t claim it. And I suspect there will be a lot more apologizing.”

Benders explained Catholics must recognize their own guilt, as people “who have our need for mercy, our need for forgiveness and our need to be reconciled,” reiterating that process of reconciliation “has to be for everyone at the table.”

Activism can be a daunting task, especially when one does not know where to start, so Benders suggested starting “very seriously in reflection, in conversation with spiritual directors. Figure out where your gifts are.” And whatever your gifts may be, be diligent in using them, she said.

“I would say activism is about finding one’s moral agency and claiming one’s commitment, and then working with others wherever our gifts are; wherever our power is,” she said, shedding a theological light on the topic. “My letter was activism,” she stated, referring to the statement she issued.

Education about our nation’s history has been diluted by academia and is not what it should be, Bender indicated. “Academia can be quite liberal,” she explained. “That’s sometimes the accusation: way too liberal. It can have progressive views, but actually be conservative in holding onto tradition and authority.”

“I have progressive views on the need for racial justice, whether that is community development programs or something, but then I go back to my classes and teach using only the Western tradition, mostly white men, even excluding myself as a women,” she said.

The ability to understand the minority students’ experience and bring that empathy into the classroom is something many say is lacking in higher education across the nation.

Keith Norward, a junior political science major and president of the Black Student Union at DePaul University, said: “I know that a lot of teachers don’t really know how to handle different students that come from various backgrounds and cultural backgrounds, and I think that’s something we lack a good amount of. And that’s teachers that represent diverse backgrounds and who can adequately comprehend what students experience. I think that’s a huge part in a student’s success.”

A majority of universities have a Title VII department that addresses overt racism and harassment; Title VII of the Civil Rights Act prohibits discrimination based on race, color, religion, sex and national origin.

But microagressions that are a reality for students of color — such as words or behavior that communicate hostile, derogatory or negative prejudicial slights and insults — are a bit harder to navigate.

Benders laid out steps her faculty will take to ensure racial diversity and inclusivity in the statement the university released, taking accountability for the places the institution could improve. As Pope Francis said, she too believes in listening. “How are we reaching out to nonwhite students,” is one question she is encouraging her staff to ask.

“JST (Jesuit School of Theology) does not have a good diversity of U.S. students, diversity in terms of race. (So, asking) what’s happening? What is it about what we teach, what we say, (or) our art on the wall? And working with professionals who work in diversity and inclusion,”said Benders.

In terms of changing the culture that allows internal and external racism to thrive, Benders said, “My sense is, if you change behavior, then one becomes more aware, and people have a better understanding. If I ask you to investigate what the climate is, then you learned something.

“The staff member learns something, then hopefully they internalize it. And it makes this priority more in the daily culture,” she continued. “I can’t change somebody’s attitude, but we as a school can make it very clear that we are about welcoming every person who walks through the door.”

“So, if people don’t want to join that, they can work somewhere else,” she added, making it clear the diversity and acceptance that is rooted in the church will be present at their school.

As a student of color at a predominantly white institution, Keith Norward suggested the same approach to making DePaul more comfortable for minorities.

“I think it has to start in the training and understanding who you are hiring. Just kind of having those spaces for DePaul to train on what microaggressions are. I think to an extent, a lot of people don’t know that people could be using a microaggression against a student. So, I think awareness, that’s where I’d start,” Norward told CNS.

As beneficial as policy can be, discrimination is rooted in an individual’s personal perceptions. Making a difference in this area begins with — and is mainly — personal work, according to Bender.

“The massive work of cultural shift will come because of our own examination of conscience, our own commitment to learning more and understanding more and as a practice of generosity and empathy towards others; That’s kind of the outward. Empathy, and listening, and generosity, and crediting what other people tell us,” said Benders.

“But it’s all those things we talked about, as Catholics; As people of faith, people who believe in a good God and a God of mercy. And how do we do that? We believe in Jesus as here for the poor and marginalized. That means us too. It means our own transformation. It got to start with us, and that’s why I apologized. But one apology isn’t enough.”