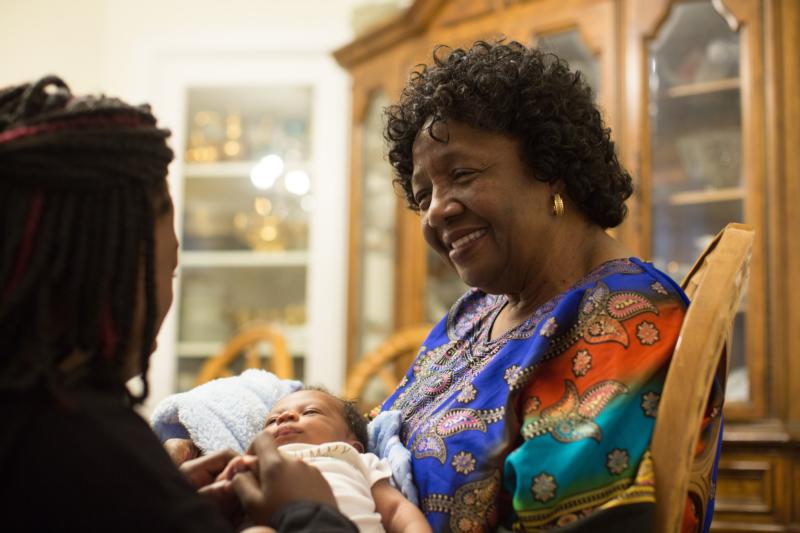 Sharonell Fulton, a foster parent in Philadelphia, is pictured with a young woman and child in a May 23, 2018, photo. President Donald Trump signed an executive order June 24, 2020, intended to improve the child welfare system, seeking to strengthen foster care and adoption programs, and to increase partnerships between public, private, faith-based, and community organizations to help keep families together. (CNS photo/courtesy Becket Religious Liberty for All)

WASHINGTON (CNS) — President Donald Trump June 24 called for creating partnerships between state agencies and public, private, faith-based and community organizations “to help keep families together and, when that is not possible, to find children forever families.”

His support for faith-based agencies’ involvement in foster care and adoption services was among a number of provisions included in an executive order he said was meant to “enhance our child welfare system and promote permanency for children in the foster care system nationwide.”

“All children deserve a stable, supportive and loving home in which to grow, thrive and realize their full potential,” Trump said.

To create these partnerships, the U.S. Department of Health and Human Services is authorized under the executive order “to develop guidance for states on best practices for effective partnering with faith-based and community organizations, aimed at improving outcomes for children and families.”

HHS also can hold states “accountable for recruiting an adequate number of foster and adoptive families for all children.” Trump’s order also allows HHS to collect and publish localized data “that can be used to aid in the development of community-based prevention and family support services and in the recruitment of foster and adoptive families.”

Other provisions in Trump’s executive order calls for improving resources provided to caregivers and those they care for. “To accomplish this,” HHS said it “will increase the availability of trauma-informed training, support guardianship through funding and grants, and enhance support for kinship care and for youth exiting foster care by evaluating barriers to federal assistance.”

A third component in Trump’s order has to do with improving federal oversight “over key statutory child welfare requirements.”

Trump’s inclusion of faith-based agencies in his executive order comes some months after the U.S. Supreme Court has agreed to hear a case during its next term next term to determine if the city of Philadelphia can exclude a Catholic social services agency from the city’s foster care program because the agency does not accept same-sex couples as foster parents due to Catholic teaching supporting traditional marriage between one man and one woman.

The case, Fulton v. Philadelphia, takes its name from Sharonell Fulton, a foster parent who joined in the lawsuit against the city along with another foster parent, Toni Simms-Busch.

The issue of “freedom of conscience in adoption and foster care” happened to be highlighted on the fourth day of the U.S. bishops’ Religious Freedom Week, June 22-29. The bishops’ designated the issue as the focus for June 25.

While more children wait to be placed in families in this country, the bishops’ said in a June 25 reflection, “a growing number of cities will not work with faith-based agencies that refuse to place children in situations that violate the agencies’ religious beliefs, such as with same-sex couples or unmarried heterosexual couples.”

As a remedy to this situation, the U.S. Conference of Catholic Bishops supports the Child Welfare Provider Inclusion Act, which has been proposed in the House and Senate. The measure would prohibit the federal government, and any state that receives certain federal funding, from discriminating against agencies on the basis that they decline to provide services that conflict with their religious beliefs.

A friend-of-the court brief filed June 3 by the USCCB filed June 8 with other faith groups in Fulton v. Philadelphia said Catholics have been involved in caring for the orphaned since the early church and in the beginnings of the church in America.

“This history, and the theological basis that animates it, together make clear that providing foster care represents a core religious exercise for Catholics,” it said.

The USCCB said it was motivated to join in the brief by its “interest in religious freedom and the rights of faith-based organizations and their adherents.”

“The conference submits this brief because it raises the important question whether churches and other religious organizations can continue to provide critical human services, as organized communities of religious adherents have done for centuries, without surrendering their religious beliefs,” it said.

“It is critical that we strengthen our foster care and adoption system in order to improve the outcomes experienced by America’s children and youth and promote permanent homes,” Trump said in his executive order.

“There are currently more than 400,000 children and youth in foster care in the United States, with many waiting years to find permanency with a family,” he said. “Each year, close to 20,000 youth age out of care without the support of a forever family to help them navigate their entry into adulthood and support them as they pursue their dreams.”

When youth” age out” of the system and do not have the support of a permanent home, he said, they “experience higher rates of homelessness, incarceration and unemployment.”

“Each and every child deserves a forever family,” Trump added, saying that his administration “is working with partners at all levels to champion this cause and ensure that no child is forgotten.”