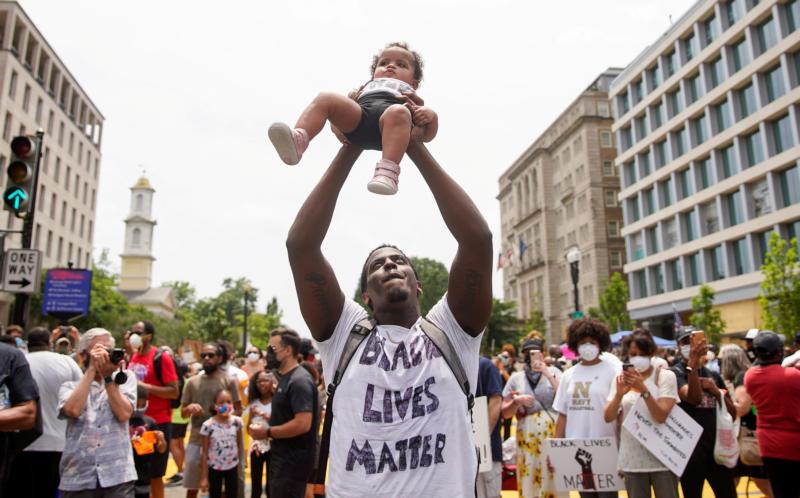 A man in Washington holds up a child during a protest against racial inequality June 6, 2020. Demonstrations continue after a white police officer in Minnesota was caught on a bystander's video May 25 pressing his knee into the neck of George Floyd, an African American, who was later pronounced dead at a hospital. (CNS photo/Eric Thayer, Reuters)

PORTLAND, Ore. (CNS) — Declaring that racism is real and must be addressed, Portland Archbishop Alexander K. Sample in remarks June 5 and 6 made impassioned pleas for justice, peace and unity.

“We have a lot of healing to do in our country,” he said June 5 in a livestreamed talk from his home chapel.

Encouraging small groups in the parishes of western Oregon to take up the issue of racism, the archbishop insisted that any action will only succeed if it is honest and emerges from prayer.

“I am not an America basher,” the archbishop said. “This is a great land and a blessed land, and we have much to be proud of. But it is undeniable that there are still injustices that sicken segments of our society.”

During the June 5 “Chapel Chat,” one of a series of presentations given on Friday nights during the COVID-19 pandemic, the archbishop called the death of George Floyd, who died in the custody of Minneapolis police May 25, “horrific” and “inexcusable.” Floyd’s death, considered a murder by prosecutors, has sparked protests worldwide.

During the 33-minute reflection that drew 4,000 viewers, the archbishop prayed that Floyd and his family would receive justice in the legal system.

The archbishop called peaceful protests, even when forceful, “righteous, legitimate and necessary.” He said the actions are a part of “the greatest of our American traditions,” adding that current nonviolent demonstrators have raised consciousness. 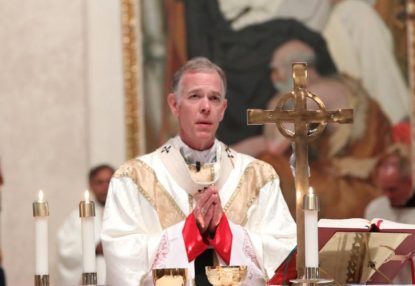 Archbishop Alexander K. Sample of Portland, Ore., celebrates the Eucharist June 6, 2020, at St. Mary of the Immaculate Conception Cathedral in Portland. He said the Mass to pray for peace and justice amid racial strife in the state and nation. (CNS photo/Ed Langlois, Catholic Sentinel)

“I stand by and with all those who are speaking out against the injustice and racism that still pervades our country to a great degree,” the archbishop said.

But he strongly criticized those who use the demonstrations as an opportunity for rioting, anarchy and looting. “This has distracted and detracted from the real issue,” the archbishop said.

He cited Pope Francis, who prayed for Floyd while saying that outbursts of violence are self-defeating.

Decrying those who have made the situation yet another point of political wrangling, Archbishop Sample said, “I am sick of the us-against-them mentality.” He looked dejected as he described a society so divided that various parts are unwilling to listen to the others.

He reminded viewers that Catholic social teaching has profound wisdom to offer in a time of injustice and strife. “The church says a lot about what it means to live together in society and to ensure that there is justice for all and that no one is excluded,” he said.

Everyone has equal dignity, he said, suggesting that respect for all life is degraded when vulnerable humans — like racial minorities, the unborn and elders — are seen as disposable. The breakdown of families has exacerbated the problem, he said. “We need to fight these things,” he told viewers.

The archbishop called for prayer, discussion and action on race and violence to take place in the context of the call to human dignity and a consistent ethic of life.

Explaining that humans cooperate with God in building the kingdom, he invoked the Catholic principle of solidarity, saying society could thrive if all act for the common good.

“We have work to do,” he said, asserting that every individual must examine his or her own attitudes and prejudices.

“I don’t know what it’s like to grow up an African American man in the inner city,” he said. “We need to listen and try to understand another’s experience.”

He urged Oregon Catholics to ask immigrants what they have felt by way of racism and discrimination.

On June 6, the archbishop celebrated a special Mass for peace and justice at St. Mary Cathedral of the Immaculate Conception in Portland. He said the Mass was a holy way of joining in with the cries from all who suffer racism and other injustices. He said that action should follow the liturgy.

“But everything we do in response to this crisis for us who believe must be rooted in prayer, must be rooted in our faith,” he insisted. “And not in our politics or our polemics or our ideologies. … We believe that our voice and our cry for justice will be heard.”

NEXT: Caravan of neighborhood’s cars toasts woman on 100th birthday