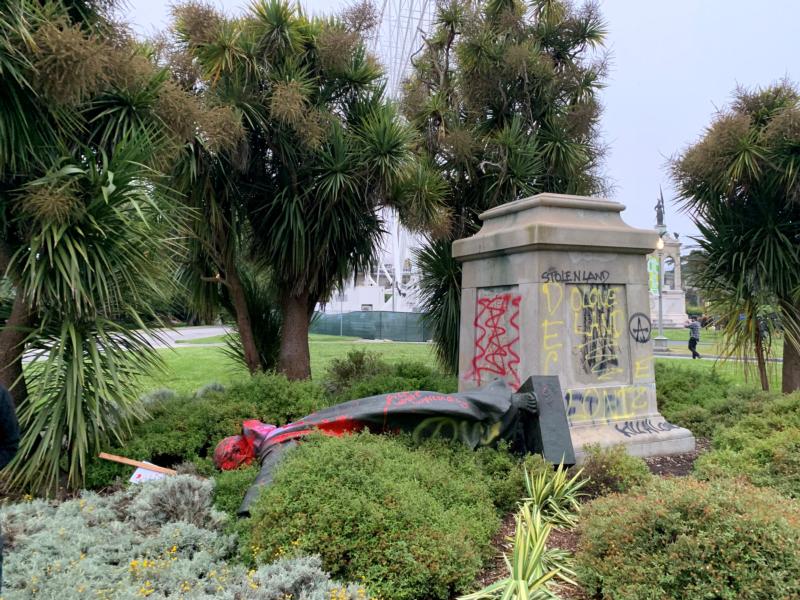 A vandalized statue of St. Junipero Serra in San Francisco is seen June 19, 2020. The Spanish Franciscan founded several missions in what is now California. (CNS photo/David Zandman via Reuters)

SAN FRANCISCO (CNS) — San Francisco’s archbishop said June 20 the “toppling and defacing” of a statue of St. Junipero Serra and other statues in the city’s Golden Gate Park is the latest example of some people using the current movement against racial injustice as a reason for violence, looting and vandalism.

“The memorialization of historic figures merits an honest and fair discussion as to how and to whom such honor should be given,” said Archbishop Salvatore J. Cordileone. “But here, there was no such rational discussion; it was mob rule, a troubling phenomenon that seems to be repeating itself throughout the country.”

The Mercury News daily newspaper reported that the night of June 19, a group of about 100 protesters toppled the Serra statue as well as statues of Francis Scott Key and President Ulysses S. Grant and defaced a monument to Spanish writer Miguel Cervantes, author of “Don Quixote.”

“Police were called to the area just after 8 p.m., and said people in the group threw objects at the officers. The crowd dispersed around 9:30 with no arrests or reports of injuries,” according to the paper.

The protesters’ action are being repeated around the country as demonstrators in a number of U.S. cities topple statues of Confederate generals and other figures from U.S. history that they consider monuments to white supremacy.

“What is happening to our society?” asked Archbishop Cordileone. “A renewed national movement to heal memories and correct the injustices of racism and police brutality in our country has been hijacked by some into a movement of violence, looting and vandalism.”

St. Junipero Serra, who was canonized by Pope Francis Sept. 23, 2015, during his pastoral visit to Washington, is known for spreading the Gospel in the New World during the 18th century.

The Franciscan priest landed in Mexico, then made his way on foot up the coast of Mexico and to California, where he established a chain of missions that are now the names of well-known cities such as San Diego, San Francisco and Santa Barbara.

He was the first president of the California mission system, and personally founded nine of the state’s 21 missions. It is estimated that during his ministry, St. Junipero Serra baptized about 6,000 native people.

In 2015, some people objected to the canonization of the Spaniard, like critics did of his beatification in 1988, because of questions about how Father Serra treated the native peoples of California and about the impact of Spanish colonization on native peoples throughout the America.

“Everyone who works for justice and equality joins in the outrage of those who have been and continue to be oppressed. It is especially true that followers of Jesus Christ — Christians –- are called to work tirelessly for the dignity of all human beings. This is a cornerstone of our faith,” Archbishop Cordileone said.

“Our dear city bears the name of one of history’s most iconic figures of peace and goodwill: St. Francis of Assisi,” he continued. “For the past 800 years, the various Franciscan orders of brothers, sisters and priests that trace their inspiration back to him have been exemplary of not only serving, but identifying with, the poor and downtrodden and giving them their rightful dignity as children of God. St. Junipero Serra is no exception.”

The archbishop said the saint “made heroic sacrifices to protect the indigenous people of California from their Spanish conquerors, especially the soldiers,” he said.

Even with an infirmed leg that “caused him such pain, he walked all the way to Mexico City to obtain special faculties of governance from the viceroy of Spain in order to discipline the military who were abusing the Indians,” Archbishop Cordileone said. “And then he walked back to California.”

“St. Junipero Serra also offered them the best thing he had: the knowledge and love of Jesus Christ, which he and his fellow Franciscan friars did through education, health care and training in the agrarian arts,” he added.

However, the archbishop acknowledged that “historical wrongs have occurred, even by people of goodwill, and healing of memories and reparation is much needed.”

“Anger against injustice can be a healthy response when it is that righteous indignation which moves a society forward. But as Christ himself teaches, and St. Francis modeled, love and not rage (are) the only answer,” Archbishop Cordileone said.

The California Catholic Conference, the public policy arm of the state’s bishops, echoed what Archbishop Cordileone said about St. Junipero Serra and the needed efforts to address racism, saying this movement “has been, at times, challenging, but it has provided bold new hope for every American that our nation can begin to transform key elements of our racist past and present.”

“We vigorously and wholeheartedly support a broad national coalition, especially in its peaceful dedication to eliminating racism against members of the African American and Native American communities,” the conference said in a June 22 statement.

It acknowledged the momentum growing over the question “of removing statues of political, military and cultural leaders of the past.”

However, it said, “if this process is to be truly effective as a remedy for racism, it must discern carefully the entire contribution that the historical figure in question made to American life, especially in advancing the rights of marginalized peoples.”

“In calling for the removal of images of St. Junipero Serra from public display in California, and in tearing down his statue in San Francisco and in Los Angeles, protesters have failed that test,” the statement said.

St. Junipero Serra “was not simply a man of his times,” the Catholic conference stated. ” In working with Native Americans, he was a man ahead of his times who made great sacrifices to defend and serve the indigenous population and work against an oppression that extends far beyond the mission era.”

“And if that is not enough to legitimate a public statue in the state that he did so much to create,” it concluded, “then virtually every historical figure from our nation’s past will have to be removed for their failings measured in the light of today’s standards.”