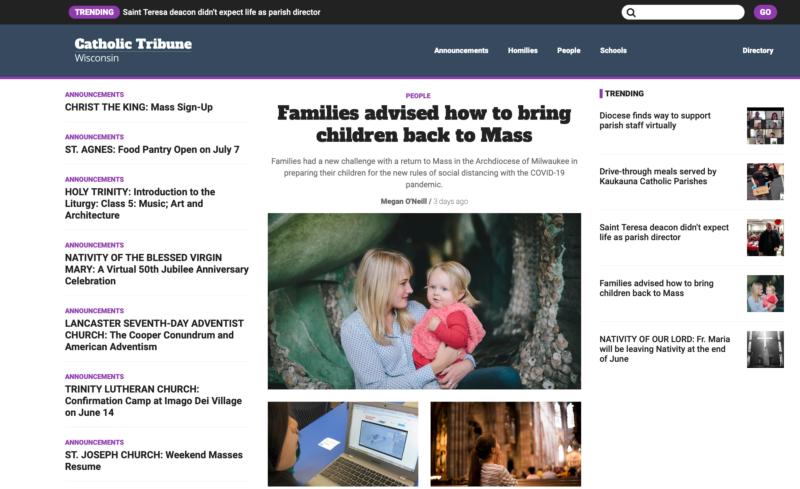 This is a screen shot of Wisconsin's Catholic Tribune. The website that is part of Chicago-based network has been found to be using content from diocesan newspapers without permission. (CNS photo/courtesy The Compass)

ALLOUEZ, Wis. (CNS) — A website purporting to be Catholic is featuring stories and other information from around Wisconsin.

Catholic Tribune Wisconsin, which began posting stories Jan. 24 is a product of Franklin Archer, a Chicago-based media company that publishes hundreds of business and local secular news websites around the country.

The company’s main website, franklinarcher.com, states that it is “the largest producer of local news in the United States. We help foster community by covering the people and organizations that make up your neighborhoods.”

News reports in 2019, however, showed the company’s websites tend to foster a political agenda.

“Wow, I didn’t realize there were religious publications (created by Franklin Archer), too,” she told The Compass June 9, “but I guess it makes sense.”

Bengani wrote that an investigation by the Tow Center for Digital Journalism discovered at least 450 websites in a network of local and business news organizations. “Franklin Archer’s Local News Network (is) the single largest network with almost 130 sites,” said Bengani.

“The networks can be traced back to conservative businessman Brian Timpone,” Bengani wrote in CJR. “In 2012, Timpone’s company, Journatic, an outlet known for its low-cost automated story generation (which became known as ‘pink slime journalism’), attracted national attention and outrage for faking bylines and quotes, and for plagiarism.

“Journatic rebranded as Locality Labs in 2013; Locality Labs is behind many of the publications we discovered that mimic the appearance and output of traditional news organizations.”

The Catholic Tribune Wisconsin website’s home page is filled with headlines about Catholic-related news from around Wisconsin. Many of the stories appeared first in the state’s diocesan newspapers and were posted on their websites. Others are taken from diocesan Facebook and YouTube pages, as well as parish bulletins.

The Compass contacted Franklin Archer through its website June 5 — the website does not include names of any personnel — and asked for clarification. “(Catholic Tribune) has news stories attributed to The Compass, basically taking our content and reposting without permission,” The Compass wrote in an email.

After a follow-up email, Michael Timpone, who is CEO of Franklin Archer and brother of Locality Labs’ Brain Timpone, responded June 9.

“Our apologies,” wrote Timpone. “It was our mistake. Our mass content team took those stories as press releases. We have since gone back, fixed them all and have reset the team so that will not happen in the future. If you have any other issues as you go forward, don’t hesitate to reach out.”

In reply to Timpone’s email, The Compass asked what the purpose is of the website. “It seems to duplicate information all five Wisconsin dioceses provide,” The Compass wrote. “Are you not concerned that people might see this information as coming directly from a diocesan source?”

As of June 15, Timpone did not respond, nor were stories from The Compass removed from his website.

At least 14 Compass stories were rebranded and published on the site, even though The Compass website states: “Reproduction of material from this website without written permission is strictly prohibited.”

Other stories were written by staff members from the Madison Diocese’s Catholic Herald. Mary Uhler, editor, told The Compass that using content from her diocese’s publication “seems like plagiarism.”

“This site never contacted us to publish our articles, so I am definitely not happy about this,” she said. “It’s interesting that their site is copyrighted.”

The Catholic Tribune also has a presence on social media, where stories originating in The Compass are shared on Facebook.

Timothy Feldhausen of the Davis and Kuelthau law firm, diocesan attorney for the Diocese of Green Bay, said the Catholic Tribune’s use of original material generated by The Compass is likely in violation of copyright law.

“Although there are some exceptions, such as the ‘fair use’ doctrine, another party simply reusing an author’s material by republishing content would not fall under such an exemption and would likely constitute copyright infringement,” said Feldhausen.

“In the world of easy to access news and media, it is unfortunately also easy to take the copyrighted materials of others and pass them off as original content,” he said. “Catholic media, like other content creators, need to be alert to violations of intellectual property law in order to protect against improper use (or worse, distortion) of Catholic news and content.”

While the content posted on Catholic Tribune Wisconsin is not objectionable, its objective remains unknown and lacks transparency regarding its owners. No ads are posted on the website, which would be a revenue source. Each story includes an invitation to submit an email address to receive alerts about new offerings.

Other news outlets investigating Franklin Archer and other similar publishing outlets point to email address harvesting as a way to push out political messages before the November elections.

“I think that’s the assumption we’re working with as well,” CJR’s Bengani told The Compass. “Harvest email addresses, and then use it to target the recipients with ‘something.'”

NEXT: Catholics of all ages, races march on Atlanta for racial justice