Catholics of all ages, races march on Atlanta for racial justice 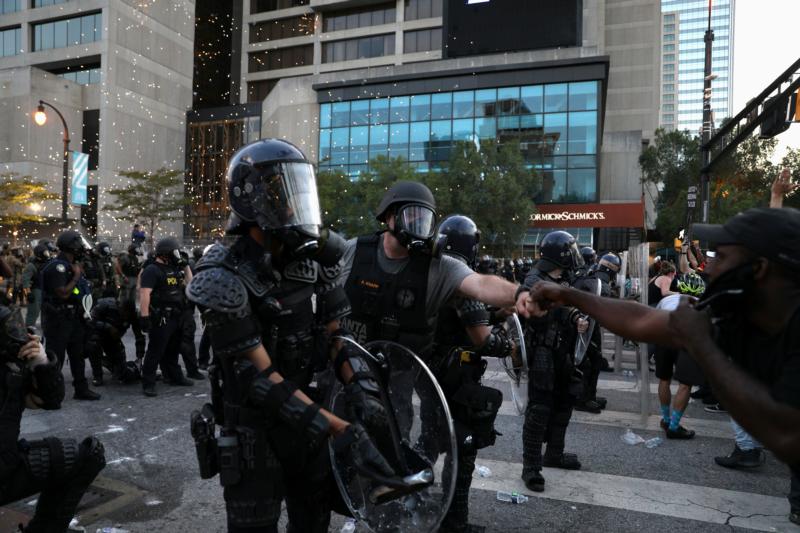 A police officer and protester in Atlanta acknowledge one another June 1, 2020. Demonstrations continue after a white police officer was caught on a bystander's video May 25 pressing his knee into the neck of George Floyd, an African American, who later died at a hospital.(CNS photo/Dustin Chambers, Reuters)

ATLANTA (CNS) — A peaceful protest against racism and racial injustice in Atlanta June 11 brought together Catholics of all ages and races, including families, students, teachers, priests, deacons, religious, chancery staff and local faith organizations and ministries.

Over 400 Catholics filled the street in front of the Shrine of the Immaculate Conception. Shrine volunteers greeted attendees and name tags were provided to help people recognize familiar faces hidden by masks, a required safety precaution due to the COVID-19 pandemic. Social distancing also was encouraged during the march.

Cathy Harmon-Christian was one of many volunteers from the Atlanta shrine greeting marchers. She has been a member of the parish for about five years.

“I was grateful to see this show of solidarity,” she told The Georgia Bulletin, newspaper of the Archdiocese of Atlanta.

For those who did not feel safe or were unable to join in person, a livestream of the march was available, with some 750 people watching from beginning to end. Online participants also sent in their names to be worn by attendees.

George Harris led a call and response on the steps of the shrine at the beginning of the protest. He is a member of St. Anthony of Padua Church in Atlanta and marched with his wife and two daughters.

Originally from Birmingham, Alabama, Harris grew up knowing victims of the 16th Street Baptist Church bombing in 1963 committed by four known Klansmen and segregationists. Four girls were killed and 22 other people were injured.

“This is a peaceful and prayerful march for justice,” said Father Victor Galier, pastor of St. Anthony of Padua Church and member of the planning committee for the march. He’d hope for at least 50 people to participate, but attendance exceeded that number by hundreds.

“We must examine our own consciences for the times we have let racism take root in our conversations, our lives and in our nation,” he added.

“At the very least, the people of St. Anthony of Padua are hurting,” said Father Galier of his community. The parish in Atlanta’s West End consists of predominantly black Catholics.

The pastor has been protesting racism and injustice in Atlanta over the past couple of weeks in demonstrations, which were sparked by the recent murders of black Americans, including Ahmaud Arbery, Breonna Taylor and George Floyd.

In the early morning hours of June 14, the city of Atlanta was roiled by the fatal police shooting of an African American man, Rayshard Brooks, 27.

Officers said he resisted arrest and stole an officer’s Taser after initially agreeing to a sobriety test. Brooks’ death has been ruled a homicide. One officer was fired, another officer was put on administrative leave, and the city’s police chief has resigned.

“Racism is alive and well in our nation and world,” said Father Galier told The Georgia Bulletin during the June 11 Catholic-led protest. “As people of faith, we must because the Gospels called us take a stand against sin. It’s no longer good enough to not be racist ourselves. We have to be actively anti-racist and work for the common good.”

For those who think marching against racism is not important, Archbishop Hartmayer cited history, hope and conversion as the reasons to do so.

“We want to join generations of people who left their homes and took to the streets to demand justice,” said the archbishop. “Racism continues to plague this country. And the time is right, once again, to seek radical change within our society and ourselves.”

“Our African American families are hurting,” said Archbishop Hartmayer. “We need to listen to their voices. We need to walk with them on this new journey. We march because we are in need of another conversion. And we start by gathering as a community to share Scripture and prayer.”

Marching was something Stan Hinds watched his teachers do growing up — those teachers were on the Edmund Pettus Bridge, he said, referring to the National Historic Landmark in Selma, Alabama, the site of the beatings of civil rights marchers during the first march for voting rights.

He continues this example for his students as a teacher at Cristo Rey Atlanta Jesuit High School since it opened. Hinds has been a member of SS. Peter and Paul Church in Decatur, Georgia, for 27 years.

Song, prayer and Scripture filled the normally busy rush hour streets of downtown Atlanta during the protest. As participants walked to Centennial Olympic Park, there was a “Say Their Name” litany for those who have died in the fight against racism. The response was, “Rest in Peace.”

At the last stop, there was a brief reading of the Lord’s Passion. Following the moment Jesus died, marchers knelt for eight minutes and 46 seconds, honoring lives lost in the ongoing fight for racial equality. It also was symbolic of the amount of time a Minnesota police officer held on Floyd’s neck pinning him to the ground.

Catholics were encouraged to “listen, learn and act” after the march to help fight against racism. Suggestions were shared with attendees, such as encountering people on the margins, listening to stories, becoming educated about racism and actively promoting justice.

A list of recommended films and online resources were shared with marchers. The list included films such as “True Justice: Bryan Stevenson’s Fight for Equality” and movements such as Campaign Zero to end police brutality, and a call to work for passage of hate crime legislation in Georgia.

The June 11 event is just the beginning, said Father Galier.

“We really have to be working at this all of the time and dismantle the structure of sin wherever we find it,” he said.

Smith is a staff reporter at The Georgia Bulletin, newspaper of the Archdiocese of Atlanta.