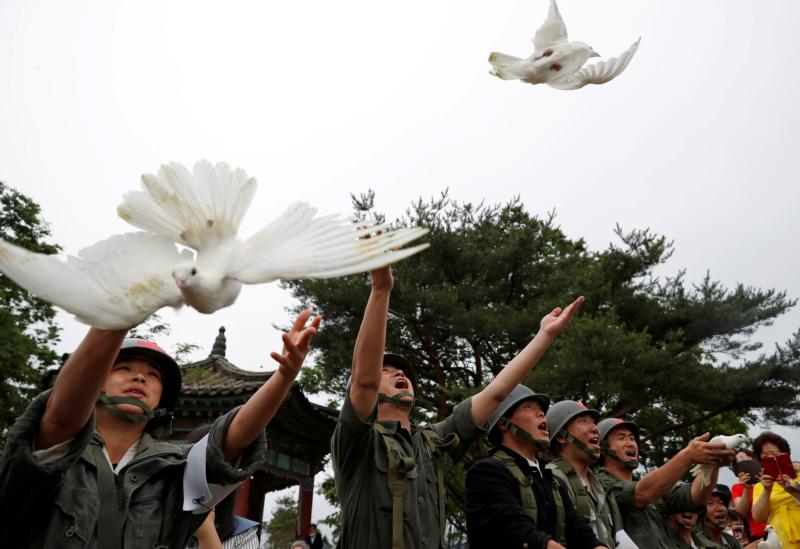 Doves are released during a ceremony commemorating the 70th anniversary of the Korean War, near the demilitarized zone separating the two Koreas, in Cheorwon, South Korea, June 25, 2020. (CNS photo/Kim Hong-Ji, Reuters)

SEOUL (CNS) — Catholics prayed for lasting peace on the divided Korean Peninsula June 25, marking the 70th anniversary of the outbreak of the Korean War.

The two Koreas are still technically at war because the war ended in a truce, not a peace treaty.

Ucanews.com reported the Catholic Bishops’ Conference of Korea said 16 dioceses in South Korea held Masses in succession on the anniversary of the outbreak of the 1950-53 conflict.

Mass at Myeongdong Cathedral in Seoul was attended by 230 Catholics.

“I wanted to state that although achieving true peace that we all want is a very difficult thing, it is absolutely not impossible,” Cardinal Andrew Yeom Soo-jung said.

His comments came amid increased border tensions after North Korea recently called South Korea an “enemy” and cut off all cross-border communication lines. In mid-June, North Korea blew up an inter-Korean liaison office opened after a 2018 summit between the two Koreas.

He prayed for all political leaders to “overcome personal, partisan and national interests” and strive for universal common peace by realizing the common good for both South and North Korea.

Bishop Peter Lee Ki-heon, head of the bishops’ Committee for the Reconciliation of the Korean People, issued a statement calling for South Korea’s government to find ways to expedite inter-Korean exchanges without violating international sanctions.

“Progress in inter-Korean relations have not been made due to the U.N. sanctions toward North Korea and the COVID-19 situation,” he said.

PREVIOUS: Pandemic showed just how much people need each other, pope says

NEXT: Catechesis is about a relationship, not just information, Vatican says