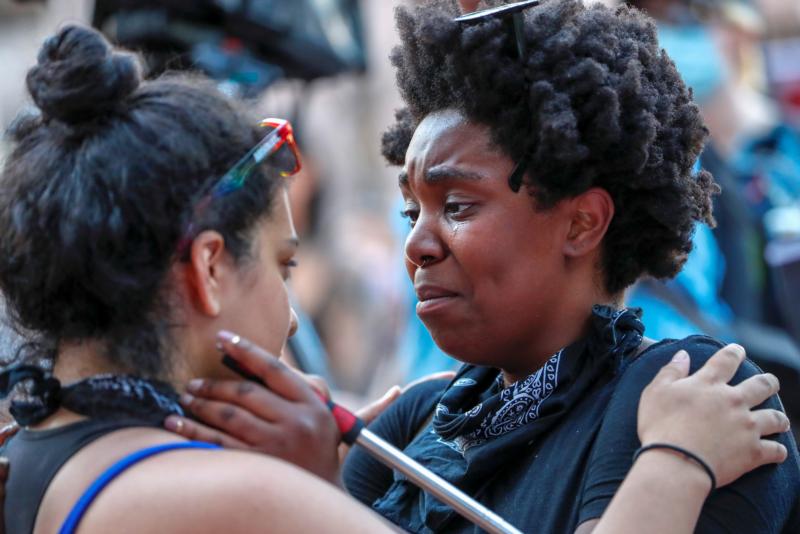 Women embrace during a protest outside Hennepin County Government Center in Minneapolis May 29, 2020, following the death of George Floyd, an unarmed African American man whose neck was pinned to the ground by police for more than eight minutes before he was taken to the hospital. (CNS photo/Eric Miller, Reuters)

VATICAN CITY (CNS) — Praying for George Floyd and all those who suffer from discrimination and violence in the United States, a top U.S. cardinal said Christians cannot hold any hatred or contempt in their heart when it is filled with God’s love.

“If the peace of Christ is truly present in the hearts of believers, there can be no more room for rivalry, for the denial of the dignity of others and for the oppression of others,” said Cardinal Kevin Farrell, who led an evening prayer vigil June 5 in Rome’s Basilica of Santa Maria in Trastevere.

“If, in every Christian, there really is a special dwelling place of God, his or her heart will be transformed. In them there cannot be any more feelings of hatred and contempt toward anyone,” and they will only look at every other human being with the same respect and compassion with which God sees everyone, he said.

The vigil was organized by the Community of Sant’Egidio to foster peaceful coexistence in the United States after the death of Floyd and ongoing tensions.

Cardinal Farrell is prefect of the Dicastery for Laity, the Family and Life and served as auxiliary bishop of the Archdiocese of Washington from 2002 to 2007 and bishop of Dallas from 2007 to 2016.

He told Catholic News Service before the vigil started that he still considers Washington his home and “to see barricades around the White House is something I have never experienced in all the years I lived” there.

“I believe that it’s very important that we stop all this division, we stop the rhetoric of hatred that exists sometimes in our speech,” he said, and “we need to respect every human person.”

The cardinal began the vigil — attended by members of the lay community, city residents and dignitaries, including U.S. Ambassador to the Vatican Callista Gingrich — by asking everyone to “pray for the righteous man who died in the United States.”

Expressing his closeness to Floyd’s family and “those who suffer from discrimination and violence in the United States, let us ask the Lord to let all violence on the streets of the United States cease, that all racism be overcome and that justice be reaffirmed and that the American people return to live in peace and tranquility,” the cardinal said in his opening prayer.

In his lengthy reflection, Cardinal Farrell said peaceful coexistence and mutual acceptance must always be built anew, and Christians can contribute greatly to that by proclaiming and living out the Gospel.

By sharing Jesus’ teachings, Christians “are helping all our fellow citizens to return to the authentic ideals of our nation, its constitution and its laws,” he said.

Those teachings include Jesus telling his disciples to “Love one another as I have loved you,” making no distinction between people and excluding no one from his mercy, the cardinal said.

“This simple fact should be a strong appeal to all of us who, instead, often make distinctions based on social class, economic status, race, political affiliation,” he said.

“Unfortunately, even among us Christians, a distorted way of thinking can infiltrate, which leads us to identify with only one side, distancing ourselves from those who belong to the other side: wealthy people against poor people, intellectuals against uncultured people, progressives against conservatives, whites against blacks and, in doing so, we completely lose sight of the universal dimension of Christ’s message or even end up identifying our Christian faith with the ideological vision of the side we have embraced,” he said.

“Returning to this purity of the Gospel becomes the best way of promoting the social good, avoiding partial and ideological visions,” he said.

The day before the vigil, the head of the Community of Sant’Egidio told Vatican News that the path of nonviolence is always the road to victory when it comes to addressing the problems of racial injustice and hatred.

“The American democracy has always demonstrated, from the time the United States came into existence, that it has the resources for overcoming difficult times” and it has shown those battles can be won democratically, Marco Impagliazzo, president of the Rome-based lay community, said June 4.

Just looking at what has happened since World War II to today, “the peaceful mobilization of American citizens has achieved great results” in the fight against racial segregation and securing certain rights, he said.

So many battles, starting with Rosa Parks and leading to Martin Luther King, were fought and won through peaceful methods and nonviolent movements that “I believe these are the only possible ways to find a solution to a situation that I see is deeply stuck right now,” Impagliazzo said.

Pope Francis asked June 3 that people pray for all lives lost as a result of “the sin of racism” and for “the national reconciliation and peace for which we yearn.”

Impagliazzo told Vatican News it is time to extinguish all the “many fires” that have been ignited and fueled the past few years by “some extremist fringes of white supremacists and also by a certain (kind of) American politics.”

The fight for equal justice will be a long one, he added, because racism and its scars still run deep and the civil rights movement is still a fairly “recent” event in historical terms — going back just a couple of generations.

It is critical people acknowledge the evil of racism still exists in the United States, he said. Just one example can be seen in the overwhelming majority of death penalty sentences handed down to black men, which indicates the justice system “is not equal for everyone.”

The pope said in his remarks June 3 that “we cannot tolerate or turn a blind eye to racism and exclusion in any form and yet claim to defend the sacredness of every human life” while also recognizing that nothing is gained by violence, which “is self-destructive and self-defeating.”