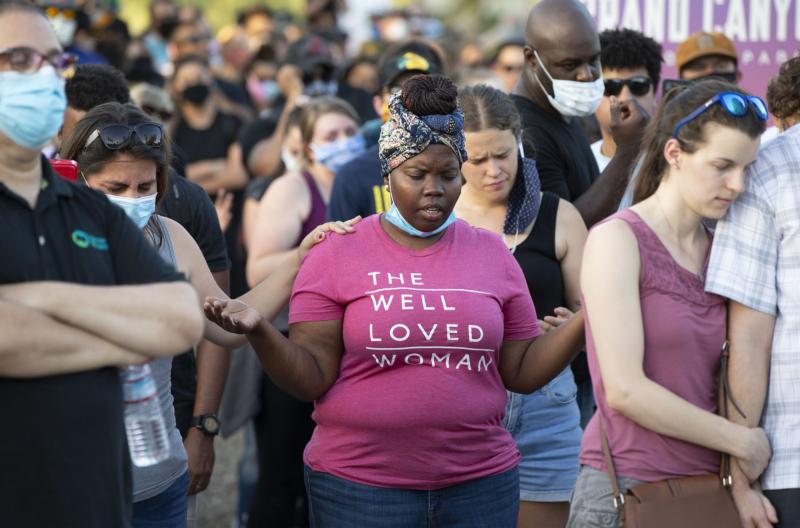 Protesters pray together during a protest at Memorial Plaza in Phoenix June 2, 2020, following the death of George Floyd, an African American man who was taken into custody by Minneapolis police and later died at a Minneapolis hospital. (CNS photo/Rob Schumacher, The Republic, USA TODAY NETWORK via Reuters)

VATICAN CITY (CNS) — With anger and frustration still high in the United States over the death of George Floyd, religious leaders should organize ecumenical and interreligious prayer initiatives to bring people together and promote healing, said a top Vatican official.

“The one thing that can help George at this moment is prayer,” Cardinal Peter Turkson, prefect of the Dicastery for Promoting Integral Human Development, told Vatican News June 3.

The Catholic Church and others have been calling for nonviolent efforts in the wake of the tragedy of his death and to stand up to ongoing racism, but the cardinal said he would “go one step further” and promote a call for forgiveness.

“This, I think, is the way we can dignify the memory of George Floyd,” the cardinal said in the interview.

“No amount of demonstration, anger, frustration or whatever can bring him back. There is only one thing that can be useful to George at this moment” as he stands before God, and that is “the forgiveness of his killers. Just as Jesus did,” said the Ghanian-born cardinal.

In those U.S. cities that have seen violence, the cardinal “humbly” suggested bishops, priests, pastors and leaders of various communities plan an “ecumenical, interreligious event.”

It could take place in a park or other open area with the goal of bringing people together to pray, he said.

The cardinal said the Catholic Church “cannot help but laud the position of George Floyd’s brother,” Terrence, who has condemned violent protests and said his brother wanted to see peace.

“The United States has a long history of nonviolent demonstrations,” Cardinal Turkson said. “Martin Luther King led a lot of them, and they were all nonviolent probably because they were well-planned, and they had a leader — a leader who could instill his sense of nonviolence in all who followed him.”

Racism is a widespread problem in society, he said, therefore, addressing its root causes requires teaching people what “the sense of humanity, what the sense of the human family is all about. We share the same sense of dignity bestowed on us by God, created in his image and likeness.”