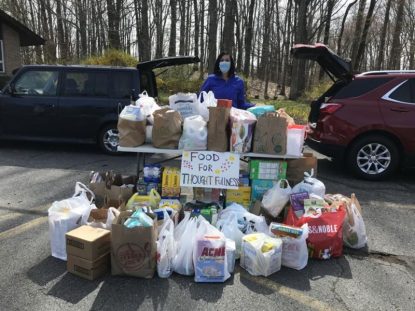 CLIFTON, N.J. (CNS) — The director of food pantries for Catholic Charities in the Diocese of Paterson said the number of people coming for food “is just staggering.”

“Throughout the last three months, we have helped more people that any time before in our 80-year history,” Carlos Roldan said in a statement July 13.

Catholic Charities, based in Clifton, runs three food pantries: Father English Food Pantry in Paterson, Hope House in Dover and Partnership for Social Services in Franklin. In a typical month the pantries help 5,000 to 7,000 people.

“In April, this number practically doubled to 11,000 people. In May, it skyrocketed to 21,000 and in June Catholic Charities’ three food pantries gave out food to nearly 25,000 children, women and men,” the agency said in a news release.

“25,000 helped in 1 month, in just one program, in just one organization,” said Scott Milliken, Catholic Charities’ CEO. “It is a sad reality that so many people need this type of assistance.”

“But there is light. Light in our staff who have worked fearlessly and tirelessly over the last several months,” he continued. “Light in so many who have given to support our ministry and other ministries who do good in their communities. Light in the appreciation that is shown by those who are receiving help. We should all focus more on this type of light during dark times.”

“These are record levels,” said Emily Engelhard, managing director of research at Feeding America, which has a nationwide network of food banks. “We have not seen food insecurity reach these levels for the length of time that food insecurity has been measured,” she told Marketplace, a nonprofit news organization.

Catholic Charities in the Diocese of Paterson also is seeing high demand for its Emergency Support Programs, another of its many services in the three-county area it covers.

For example, demand for hotel placement, has gone up tenfold throughout the last several weeks, the agency said. This is due in part to local shelters closing their doors and other factors such as the stresses surrounding COVID-19 and its economic impact that are leading to family and marriage breakups.

“Support from the community is needed for us to continue with our important mission,” said Chris Brancato, Catholic Charities’ development director. “We are blessed to receive support from generous donors, the Diocese of Paterson, the Community Foodbank of New Jersey, the New Jersey Pandemic Relief Fund, the Knights of Columbus and many other service groups and individuals who see the importance in the work we do.”

PREVIOUS: Signs emerging that some dioceses’ financial picture is better

NEXT: Ahead of third execution, church leaders urged clemency or delay