Signs emerging that some dioceses’ financial picture is better 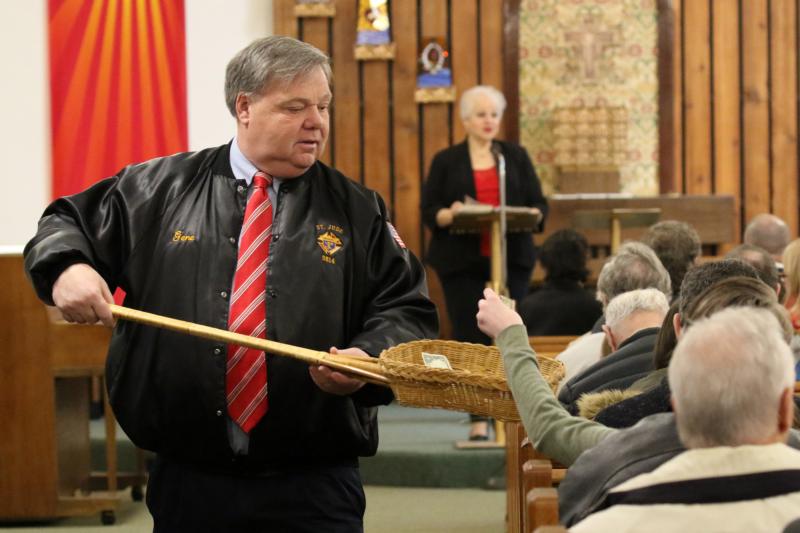 Usher Gene Johann uses a collection basket during Mass at St. Anthony of Padua Church in Rocky Point, N.Y., in 2018 -- before the COVID-19 days of sparse attendance and face masks. (CNS photo/Gregory A. Shemitz)

WASHINGTON (CNS) — While there is not enough information to declare it a trend, there are signs that some U.S. dioceses are weathering the financial upheaval wrought by the coronavirus pandemic.

The improved picture, though, has not been so widespread as to keep some dioceses from seeking furloughs, pay cuts, school closings and internal reorganizations.

In the Archdiocese of Galveston-Houston, the decline in parish offertory giving seems to have slowed, according to Aad de Lange, the archdiocese’s chief financial officer.

“The offertory, surprisingly, is holding. It’s going from month to month,” he said.

March’s offertory numbers were down 20% from year-ago levels, de Lange told Catholic News Service in a July 10 phone interview. April’s numbers — the first full month where no public Masses were celebrated — were down 18% percent from the year before. May was “almost at the same level,” he reported, adding the June figures were not yet available.

There are 1.7 million Catholics in the southeast Texas archdiocese, which has been urging parishes to adopt some form of online giving, as churches can have only 25% of their capacity in attendance for public Masses.

“We depend on online offertory,” de Lange said. Many parishes in the Galveston-Houston Archdiocese that did not have an online giving plan now do, he added.

While an online offertory is helpful, de Lange noted, what becomes key is that the parish keep communicating with parishioners. He said his own parish gives him a wake-up call via text at 6 a.m. each morning, and sends texts twice more every day. De Lange said his next project is to get Catholic schools in the archdiocese similarly connected with their students’ families.

But it’s not all sunshine, lollipops and rainbows. All archdiocesan lay staff and clergy took a 15% pay cut through next June. “We know a number of pastors in the parishes who didn’t take any salary,” de Lange said.

Overall, though, “it seems to be working,” he added. “I cannot look into the future, but from that perspective I am reasonably optimistic. I am an optimist by nature.”

In the Archdiocese of St. Paul and Minneapolis, the Catholic Community Foundation, www.ccf-mn.org, established the Minnesota Catholic Relief Fund. Within a month, according to its president, Anne Cullen Miller, the fund had raised $1.3 million, including a $250,000 gift that resulted from a 10-minute phone call.

“I had no one say no to me when I picked up the phone and asked for support,” Miller said.

The fund had raised $1.5 million — then the death of George Floyd while in police custody happened in Minneapolis. The foundation established a second fund called Neighbors in Need to help those directly affected by “the social unrest in our community,” Miller said. That fund, she added, has had several $10,000 gifts, plus one of $30,000.

In the Archdiocese of Washington, some measures of a comeback are going better than expected, according to Joseph Gillmer, executive director of development.

An archdiocesan “parish support initiative” “helped parishes get their online giving improved and get it for parishes that didn’t have them,” Gillmer said. The archdiocesan website set up a “landing page” that would allow a visitor to make a contribution to any of its parishes.

“I thought we might raise $100,000 that would come through the archdiocese,” Gillmer told CNS. “There were 9,000 people who clicked on that landing page, and based on the average gifts that we’ve received … it looks like $1 million worth of impact in toto.” A separate fund for needy parishes in the archdiocese generated $200,000 in contributions. “I was mind-blown at the generosity,” he said.

“What it tells me is that those who did not lose their job and were able to support their church, they came through in a big way. We hear, anecdotally, great things are happening in the parishes, too.”

As for the archdiocese itself, revenues were down 25%-35% in April, “and that has improved,” Gillmer said. “We’re not sure exactly where it is now, because the numbers are always a month or two behind, but we’re at the low 20s at this point, maybe a little better. We haven’t rebounded all the way.”

One unexpected bright spot, according to Gillmer: The number of donors giving to the annual archdiocesan appeal is up 5% over 2019.

A multidiocesan effort launched by #IGiveCatholic had raised more than $170,000 by mid-July, according to Julie Kenny, the organization’s national program director.

#IGiveCatholic, www.igivecatholic.org, had limited its fundraising to a “giving day” during which donors can give to dioceses, schools, and other Catholic ministries, mostly in mission areas. “When COVID hit and we started seeing all the dioceses, including my own, (saying) ‘we’re not going to be having public Masses,’ that immediately sprung to my mind the necessity for online giving,” Kenny said.

The new effort was launched Mach 26. “It seems like such a long time ago,” Kenny told CNS. But “it was a divine nudge in the ribs from the Holy Spirit,” she said. “It felt like something we had to do and something we were called to do.”

The Diocese of Cleveland has been helping parishes on multiple fronts, according to Patrick Grace, executive director of the diocese’s Catholic Community Foundation, www.catholiccommunity.org.

An emergency response fund was established to provide funds for parishes with limited resources and funds to address the immediate needs of families and individuals in their parish communities who were impacted by the COVID-19 pandemic, and provided $500,000 in seed money. The money can be used to cover individuals’ and families’ costs for food, rent, utilities and their health.

“We still have, oh, gosh, a couple hundred thousand dollars in it and we’ll use it until it’s gone. We still have people giving money to it every week,” Grace said.

Eighty of the diocese’s 185 parishes are participating in a second initiative called Secure, an offertory and revenue recovery program, Grace said. Early results, he added, showed that participating parishes experienced double-digit increases in their offertory collections.

“The pastors would be the first to tell you,” Prince said, the fund “has really been so helpful.”

The Catholic Foundation of Greater Philadelphia launched its own plan, also called the Parish Support Initiative, in mid-April. It has raised more than $148,000 for 121 parishes and will continue to be available for donors to utilize. To donate, visit www.SupportMyParish.org.

The foundation created a custom donation page on its website that allows donors to visit and select their home parish from a drop-down menu and donate to it. Donors also have the option to select “Parish Most in Need” from the drop-down menu, in which their gift is allocated to parishes that are facing extreme financial hardship during the pandemic.

The initiative also gives parishes who may not currently participate in online giving an additional platform to raise funds for their parish. The fund enables donors to support their own parishes or those deemed most in need through the foundation’s website, https://thecfgp.org/donate/parish-support-initiative.

In the Archdiocese of Boston, a “90 Days Now” campaign begun in April has reached its second phase. The program is ongoing, according to archdiocesan spokesman Terence Donilon in a July 15 email to CNS.

“It is a rolling 90-day program so we hope to get all parishes involved,” Donilon said. To date, 88% of parishes have participated, and $535,000 has been raised. Once the campaign gets to the $700,000 mark, an anonymous donor will make a matching gift, he added. The new phase hopes to reach $1 million in support.

“These challenges are going to be with us,” said Grace of the Diocese of Cleveland. “Most parishes are not even close to (Mass attendance) capacity as we live through this crisis, and it’s not going away anytime soon. It looks like it’s going to be more of a marathon than a sprint. … It’s not a quick fix.”

NEXT: Demand skyrocketing for Catholic Charities’ aid in New Jersey