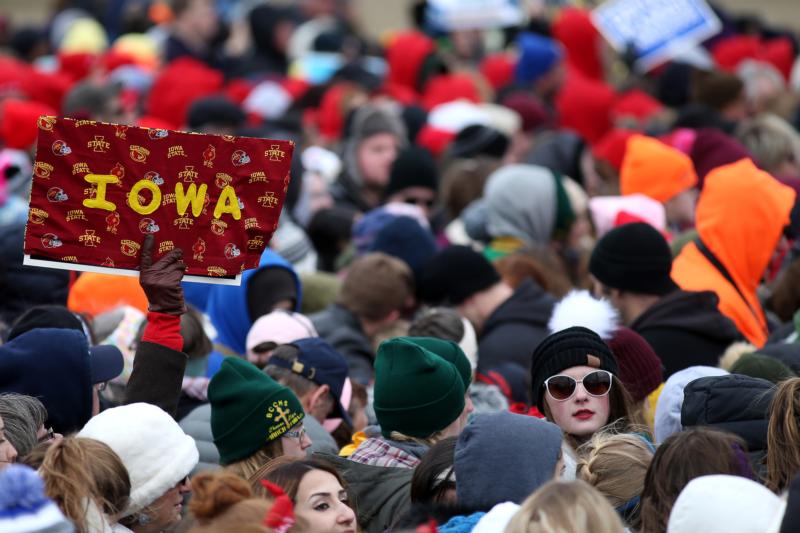 A pro-life advocate from Iowa holds a sign during the 2017 March for Life in Washington. (CNS photo/Tyler Orsburn)

Gov. Kim Reynolds signed the bill into law June 29. The injunction will continue while the suit against the law brought by Planned Parenthood and the American Civil Liberties Union takes its course.

Iowa Catholic leaders praised the legislation while the bill’s opponents argued the new law is unconstitutional because it violates due process and equal protection rights of pregnant women. Opponents also said the manner in which the bill passed at the end of the session did not allow for public debate, apnews.com reported June 30. The judge’s decision prevented the law from taking effect July 1.

Introduced late in this year’s pandemic-shortened session, the measure states that a physician performing an abortion shall obtain written certification from the pregnant woman at least 24 hours prior to doing the abortion.

Existing law requires a pregnant woman to undergo an ultrasound test so that she has an opportunity to see an image of her unborn child before making a decision about that child’s life. In Iowa, abortion is not allowed after 20 weeks of pregnancy.

Pro-life leaders had been advocating for the Protect Life Amendment, which would have reversed a 2018 Iowa Supreme Court ruling that said the state’s constitution protects the right to abortion. The amendment would have taken the constitution back to when it was neutral on abortion.

The 24-hour waiting period proposal arose when it appeared there were not enough votes to pass the amendment, said Tom Chapman, executive director of the Iowa Catholic Conference, the public policy arm of the state’s bishops. “We’re disappointed the amendment didn’t pass this year, but a 24-hour wait period is good public policy,” he said.

“I am proud to stand up for the sanctity of every human life,” Reynolds said in a statement released the same day she signed the 24-hour waiting bill. “Life is precious, life is sacred and we can never stop fighting for it. I applaud the Iowa lawmakers who had the courage to stand strong and take action to protect the unborn child.”

“Paired with the current requirement that an ultrasound be performed and the mother be given an opportunity to see the image of the unborn child, a 24-hour waiting period gives the mother just a little more time to consider this important decision,” Chapman said.

“The bill is unquestionably constitutional at the federal level. If the issue gets to the Iowa Supreme Court, perhaps it would revisit its 2018 decision finding a fundamental right to an abortion,” he added.

Davenport Bishop Thomas R. Zinkula also applauded the bill, saying: “When a woman carries a baby to term and gives birth with the intention of giving up the baby for adoption, it isn’t unusual for her to change her mind prior to formally terminating her parental rights. That is why Iowa law gives biological parents up to seven days after the birth of a child to change their minds regarding adoption.”

“Similarly,” he added, “a woman who is considering doing something as serious and sensitive as terminating a pregnancy, which presently and lamentably is allowed in the state of Iowa, should be given at least 24 hours to reconsider this very significant life-and-death decision.”

NEXT: Ex-DRE at Tennessee parish indicted for abusing girl