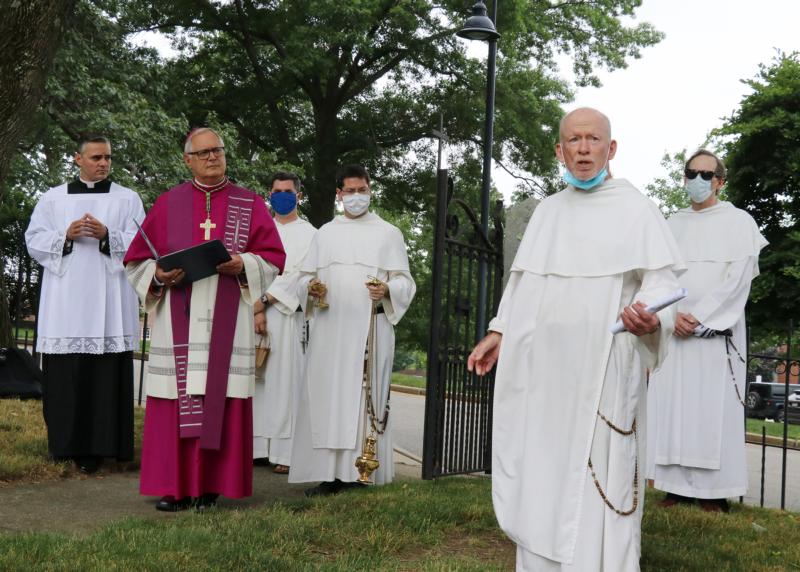 PROVIDENCE, R.I. (CNS) — Two days after a vandal defaced some of the gravestones and a central cross with swastikas at the Dominican Cemetery at Providence College, Bishop Thomas J. Tobin of Providence reconsecrated and rededicated the sacred grounds where Dominican friars have been buried since the college’s founding in 1917.

About 75 friars and members of the Providence College community gathered for the solemn ceremony June 24 when the bishop blessed the grounds with holy water and incense while offering prayers of consecration.

“Today we come to pray that God will cleanse us. That God will cleanse our world, our nation, our community, our church and this place of vandalism from all sense of anger and division, violence and vandalism, leaving a kind of peace that only the presence of God in the end can give us,” Bishop Tobin said in the tree-shaded cemetery grounds between the college’s Center for Arts, Culture and Social Justice and its athletic fields.

Dominican Father Brian Shanley, who stepped down as president June 30 after 15 years in the post, greeted Bishop Tobin at the cemetery entrance, and remarked that the moment was one of healing.

“We as a community all felt violated by what happened the other night and this is a chance for us to heal ourselves as a community and this holy ground,” Father Shanley said, adding they also should pray for the man now charged with doing the damage. “I think his motivation was more mental health issues, than I hope malice, and he deserves our prayers and forgiveness.”

On June 22, the night of the vandalism, Providence College Public Safety officers on patrol responded to a call at 9:30 p.m. about a man acting suspiciously in the Dominican cemetery on campus.

When the officers arrived, they encountered a man in the process of defacing grave headstones and burning gravesite flags, according to a joint statement issued by Father Shanley and his successor, Dominican Father Kenneth Sicard.

“Officers approached the individual to question what he was doing and to confirm the vandalism when they noticed the suspect had painted swastikas and anti-Catholic language on the cemetery’s central cross and on several of the headstones, and was actively burning American flags that stood at some of the gravesites,” the statement said.

Photos taken that night of the damage depict the Nazi swastikas on several monuments, as well as the words “Kill Jesuits now!” painted on the base of the central cross.

While the officers were attempting to question the suspect, the man struck one of the officers in the head and fled from the cemetery. The campus was placed on lockdown with a shelter in place order as officers and K-9 units from the Providence Police Department, along with the college’s public safety officers searched for the suspect.

Providence Police located the suspect, identified as Keveon Gomera, 26, hiding in shrubbery on the campus grounds and arrested him. He was arraigned June 23 on 15 counts of desecration of a grave, which is a felony, and one count of felony assault.

Campus Police Officer Kenneth Riccio was injured when encountering the suspect in the cemetery. Riccio has been a member of the campus force for more than 12 years, since his retirement from the Providence Police Department.

Father Shanley mentioned the injured officer at the reconsecration saying: “There was an assault on a person and on the graves here.”

The college president reminded all gathered that the friars who came before him and those there now have a sacred trust to move forward in the mission and ministry of the school.

“There’s a sense in which the holiness of this place is in nothing that lies on the ground, but on the lives that are underneath. That’s what makes this ground truly holy,” he said.

The cemetery was the resting place for “our beloved, deceased Dominicans who served Providence College so well and so faithfully for many years,” the school officials said in their statement.

“As we rededicate the cemetery, let us rededicate ourselves to the work and mission of Providence College that these guys gave their lives to. Today, in this cemetery, we experience the rebirth that is the part of our lives and that when bad things happen, God can heal and make whole again.”

While Father Shanley called for forgiveness, he also condemned the “racist, anti-Semitic and anti-Catholic action” that took place. The school statement said: “We condemn this action in support and solidarity with the Jewish members of our community, many of whom enjoyed the friendship of those late Dominican friars. PC has a long and proud history of collaboration with the Jewish community in Rhode Island.”

Father Shanley helped to establish the college’s Jewish-Catholic Theological Exchange in the theology department in 2007. The exchange has been a significant part of campus life, promoting interreligious learning, understanding, and friendship between Christians and Jews.

“Our community embraces love and mutual respect for all people; there is no place for hatred on our campus,” the statement said.

Snizek is executive editor of the Rhode Island Catholic, newspaper of the Diocese of Providence.

NEXT: Indiana priest suspended after derogatory remarks about protesters