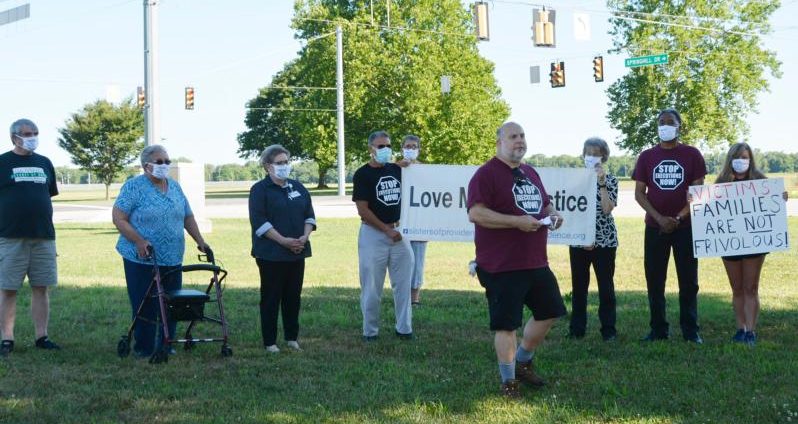 Abraham Bonowitz, co-director of Death Penalty Action, speaks during the organization's news conference outside the Federal Correctional Complex in Terre Haute, Ind., July 13, 2020. Also pictured are Priscilla Hutton, second from left, a lay associate of the Sisters of Providence of St. Mary-of-the-Woods, Ind., and Sister Paula Damiano, third from left, who is a member of the Sisters of Providence. (CNS photo/Natalie Hoefer, The Criterion)

TERRE HAUTE, Ind. (CNS) — On the grounds of the Sisters of Providence of St. Mary-of-the-Woods near Terre Haute, news of the execution pierced the quiet on the morning of July 14.

The bells of the Church of the Immaculate Conception there are tolled after any execution in the nation, explained Providence Sister Paula Damiano.

But that morning, “for the first time in 17 years,” she said, “a sister tolled the bells following (a) federal execution” at the Federal Correctional Complex.

The bells announced the 8:07 a.m. death of Daniel Lewis Lee.

Less than 24 hours before, a temporary stay of all scheduled federal executions was announced by the U.S. District Court of the District of Columbia due to evidence that the drug to be administered causes severe pain. The decision was immediately appealed to the U.S. Supreme Court by the federal Department of Justice.

At 2 a.m. July 14, the Supreme Court overturned the ruling. Lee was executed and pronounced dead six hours later, according to a Reuters report.

In sharing her reaction with The Criterion, newspaper of the Indianapolis Archdiocese, Sister Paula said the sisters “believe that forgiveness is vital to faith. We are called to forgive every day.”

She noted that many sisters “past and present” have visited death-row inmates at the Federal Correctional Complex, including one sister now deceased who had visited Lee.

“We will pray for Daniel Lewis Lee, his family, and the victims of the tragedy from 1996 and their family,” she said.

Lee was convicted of murdering a gun dealer, the man’s wife and her 8-year-old daughter in Arkansas in 1996.

The July 15 scheduled execution of Wesley Ira Purkey went forward at at 8:19 am (EDT), after the U.S. Supreme Court issued an order clearing the way. Earlier, his execution had been temporarily stayed when a judge had agreed with his lawyer on the need for further investigation into a couple of points he raised about his client’s case.

On July 14, Benedictine Father O’Keefe, 64, who is Honken’s spiritual adviser, lost his bid in U.S. District Court for the Southern District of Indiana to seek a preliminary injunction to delay Honken’s execution. Father O’Keefe, a moral theology professor at St. Meinrad Seminary in St. Meinrad, Indiana, has been asked by Honken, a Catholic, to minister to him prior to his execution.

The priest contended the coronavirus emergency in Indiana puts him and others at risk of catching COVID-19 by attending the executions, so on July 7 he filed an intervention pleading to join a lawsuit filed by a Buddhist priest seeking to delay Purkey’s execution on coronavirus fears. The judge also denied the Buddhist’s motion, which was separate from Purkey’s lawyer’s filing.

Deacon Steven Gretencord, who has ministered to death-row inmates at the federal prison for nearly 10 years, shared his reaction to the news in an early morning call with The Criterion, newspaper of the Archdiocese of Indianapolis.

“I just am amazed that we as a nation continue to use such draconian methods of punishment,” he said. “We’re so intent on revenge that we seem to lose sight of what justice is about. We only have one true judge, and all of us will face that judge.”

“It’s just such a very sad, sad, state of affairs,” he said. “This is not going to bring closure to anyone. All it does is reopen the wounds and prove that we have no idea about justice, and certainly not about mercy.”

At 10 a.m. July 13, a news conference hosted by Death Penalty Action and Terre Haute Death Penalty Resistance was underway across the street from the Federal Correctional Complex.

At that time, Lee’s 4 p.m. execution was in question pending the U.S. Supreme Court ruling on an overturned appeal for a delay until travel was safer from the risk of contracting the COVID-19 virus.

At about 10:15 a.m., the news conference was interrupted by news of the D.C. federal district court’s ruling to temporarily stay all federal executions. Cheers and applause erupted among death penalty opponents who were present at the news conference.

Speaking at the event on behalf of the Sisters of Providence, Sister Paula said her congregation was “well-aware of the heinous crimes of those now on death row.

“But they are also people who deserve love, mercy and justice,” she added. “We don’t have to love the actions, but we have to love the people — it’s the Gospel message. To do anything less would be to deny the Gospel. … (E)very person can change their lives.”

Priscilla Hutton agreed. The member of the Sisters of Providence’s lay order spoke at the news conference through her role with the social justice sector of the international organization Charter for Compassion.

“I visit a man on death row here in Terre Haute,” she said. “From all I know of the criminal justice system, and as I’ve walked these halls in the penitentiary, I’m here to say that many of these people are good people. And all we need to do is give them a chance.”

It’s not only the prisoners about whom the Catholic Church is concerned when it comes to execution. Indianapolis Archbishop Charles C. Thompson explained why in a recent statement regarding the rescheduled executions.

The “underlying Catholic teaching on (the death penalty) is grave concern for the care of souls of all involved — including the judge, jury, prison personnel, families of these officials and society itself,” he said. “Taking the life of any human being, even one who is guilty of grave crimes against humanity, weighs on the conscience of both individuals and society as a whole.”

Karen Burkhart agrees. The member of St. Susanna Parish in Plainfield spoke at the news conference through her role as the Indiana death penalty abolition coordinator for Amnesty International USA.

But she had other reasons for being present as well.

“I’m here because I want to protest the death penalty, but also because I feel just awful that people are being killed in my name,” Burkhart told The Criterion.

“America is supposed to be one of the best countries in the world, and we’re doing things that most (nations) have abolished. … It’s just an awful example to kill people who kill people, to show that killing people is wrong.”

PREVIOUS: Bishop Malesic plans to continue sharing joy of the Gospel in Cleveland

NEXT: Signs emerging that some dioceses’ financial picture is better