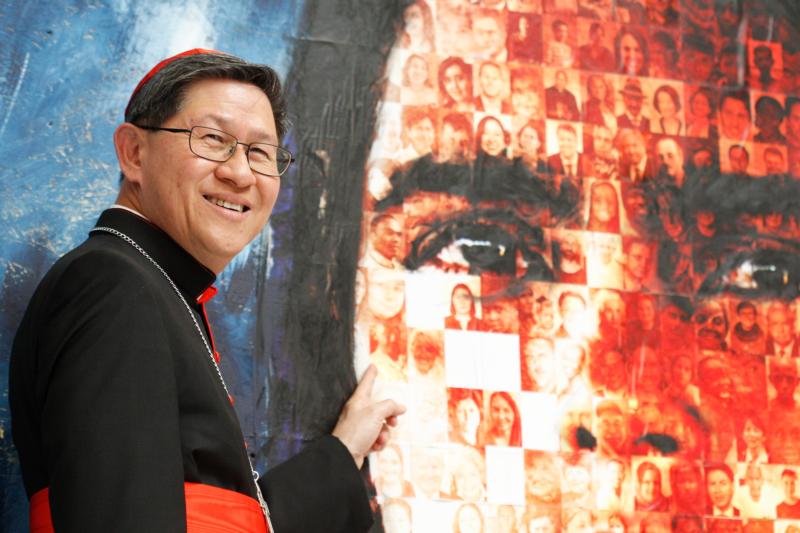 Philippine Cardinal Luis Antonio Tagle of Manila, president of Caritas Internationalis, points to a mural made of the faces of migrants that was displayed at the Vatican, May 23, 2019. Ahead of this year’s G-20 summit,  Cardinal Tagle said the consequences of the coronavirus pandemic go beyond health care and ultimately threaten the livelihood of already vulnerable populations. (CNS photo/Robert Duncan)

Presenting the organization’s annual report at an online media briefing July 17, Aloysius John, secretary-general of Caritas Internationalis, said the debt of poor countries “is often paid for by the sweat and toil of the poorest in these nations” who live in dire poverty and are “easy prey to all kinds of health problems.”

“Caritas calls for the reduction of debt of the poorest nations and for the reallocation of the funds to reliable organizations who work with these communities, in particular faith-based organizations,” John said.

“Only the reduction of debt and its reallocation for development at the grassroots will enable the achievement of the sustainable development goals and ensure the dignity of the poorest,” he said.

The secretary-general also called for a global cease-fire, as well as an end to the use of economic sanctions in the Middle East, particularly against Syria.

“The effects of the sanctions as a political tool have proved to be useless, but they have shown enormous power to destroy the lives of poor civilians,” he said.

John made the appeal as finance ministers and central bank governors of leading rich and developing nations, commonly known as the G-20, were set to meet July 18 to discuss the global economy in the wake of the COVID-19 pandemic.

Although the World Bank and the G-20 endorsed an initiative in April that would grant debt-service suspension to poor countries, all low-income countries are still obliged to pay an estimated $2.8 billion per month in debt repayments throughout 2020, the international news network Al-Jazeera reported July 16.

Furthermore, countries deemed as middle-income countries, such as Argentina, Ecuador and Lebanon, have been excluded from debt relief, prompting them to default on debt payments this year, Al-Jazeera said.

Addressing journalists at the virtual briefing, Philippine Cardinal Luis Antonio Tagle, president of Caritas Internationalis and prefect of the Congregation for the Evangelization of Peoples, said the consequences of the pandemic go beyond health care and ultimately threaten the livelihood of already vulnerable populations.

“The international debt of the poorest countries in Africa, some parts of Latin America and Asia has had major social and economic consequences,” Cardinal Tagle said. “Pope Francis has consistently urged that the debt be canceled to give those countries the possibility to pursue paths of recovery and development.”

Cardinal Wilfrid Napier of Durban, president of Caritas South Africa, said the pandemic highlighted “the powerless state of relations between the countries of Africa and the international community.”

“That is particularly true of former colonizers of the continent,” Cardinal Napier said.

The South African cardinal noted “a huge gap” in the sharing of information with African countries in order to respond to and fight COVID-19.

Cardinal Napier also said that, in most cases, the relationship between African countries and the international community “has mutated from colonial occupation and control to quasi-freedom which is characterized by near total dependence on the former occupying power for virtually everything.”

“For example, most African countries are still occupied by Europe and the West by the one thing that is still holding them back from taking their place in the world community as worthy and equal partners,” he said. “That handicap is international debt — which has already been mentioned — which even in the best of times is a severe restraint on Africa’s growth and development.”

PREVIOUS: French police suspect arson was cause of fire at Nantes cathedral

NEXT: Catholic hospitals in Syria working to help indigent patients