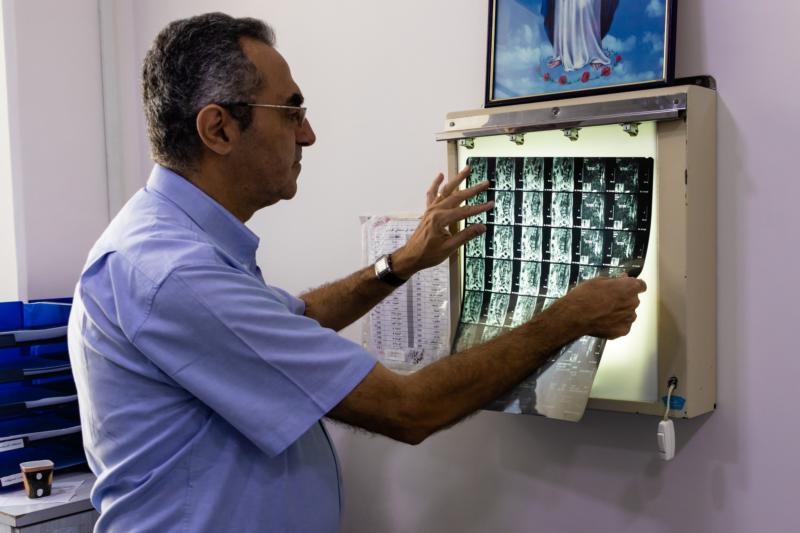 A doctor looks over an X-ray at a Catholic-run French hospital in Damascus, Syria, in this 2019 photo. Organizers of "Operation Open Hospitals in Syria" hope to provide life-saving services free of charge to vulnerable Syrians at three Catholic-run hospitals and aid some 50,000 patients by the project's end in 2021. (CNS photo/Aldo Gianfrante, courtesy AVSI)

“Institutions in Syria now are having a lot of difficulties … So, this project supporting these hospitals is helping them to go on,” said Flavia Chevallard, project coordinator for “Operation Open Hospitals in Syria” implemented by AVSI, a nongovernmental organization founded in Italy in 1972.

The project is the brainchild of Cardinal Mario Zenari, the nuncio to Syria, who in 2016 sought practical ways to support Syrians in the midst of crippling conflict.

AVSI set up social offices in three historic, nonprofit Catholic hospitals: the Italian and French hospitals in the capital, Damascus, as well as St. Louis Hospital in the northern city of Aleppo. Staff make assessments for the most vulnerable people to receive free medical care.

The open hospitals project is also supported by the U.S. and Italian bishops, the Catholic Health Association, the Knights of the Holy Sepulchre, and Catholic aid agencies in Spain and Germany, as well as other donors.

“This is an emergency project supporting the hospitals to make sure that, after the war, when the situation improves, the hospitals will be open. So, not to let everything be destroyed because of the war, the economic crisis, to help these stay in place. This is a big value,” said Chevallard, speaking from the French Hospital in Damascus via videoconference. The hospital, founded in 1905, is run by the Sisters of Charity of St. Vincent de Paul.

The Italian hospital has been in operation since 1913 under the direction of Salesian nuns. St. Louis Hospital in Aleppo, founded in 1905, is managed by the Sisters of St. Joseph of the Apparition.

So far, the hospitals have treated more than 36,000 indigent patients providing various surgeries, lab testing as well treating war-related injuries. However, Chevellard pointed out that the majority of cases involve delivering “basic life-saving assistance” to thousands.

“Of course, there are war victims. War is not only bombs, of course it is part of it and, as a project, we help these people,” Chevellard said.

“But war is also the old lady who is alone because her sons have died and she is not able to buy medicine because she doesn’t have money. The project is helping a lot of people in this situation of poverty and desperation,” she said.

“I am Syrian, but you don’t know exactly what is happening. When you see these patients, you can really know what is happening in Syria,” said Dima Allaham, the project’s social worker. “It was difficult in the beginning, but then we knew how to help the people.”

In addition to medical treatment, AVSI also helps provide salaries for the medical and support staff working at the hospitals. It also has purchased medical equipment needed for performing surgeries, X-rays and lab work among others.

“The value is, of course the medical services themselves, but also the symbol of having a place which continues to offer the best medical services,” explained Jackie Aldrette, managing director at AVSI-USA.

“They also give a sense that life can return, life can go on. Syria hasn’t been completely forgotten, even though it may feel like that. That has been our hope and desire in supporting the project,” Aldrette said.

Entering its 10th year, Syria’s ongoing conflict has witnessed half of its 24 million people fleeing their homes and towns, with some 7 million becoming refugees and another 6 million internally displaced.

Violence has erupted in the northeast and northwest of the country, but Chevellard said Syria’s main cities of Damascus and Aleppo have now been plunged into a deep economic crisis. This is due in part to sanctions from the Caesar Act — which sanctions the regime of President Bashar Assad and any institution or individuals that assist his government — as well as Lebanon’s dire financial circumstances. Syria has depended on Lebanon’s financial institutions as a kind of economic lung, but this is no longer possible.

This coupled with growing numbers of Syrians infected by the coronavirus are “very dangerous, worrying,” Chevellard said, due to the war-ravaged country’s “very weak health infrastructure,” and it underscores why this project is so necessary at this time.

Syria has reported some 430 COVID-19 cases in the country. However, there is little testing capacity, there are few ventilators and not enough personal protective equipment for health care workers.

Chevellard said there are 24 ventilators in the three hospitals, but almost none in the country’s northeast region. In April, Pope Francis donated 10 ventilators to support the COVID-19 emergency in Syria.

However, due to Syria’s collapsing economy situation, Chevellard pointed out that some Syrians are “choosing food rather than masks,” to keep body and soul alive, noting that many people are forced to live on a day-to-day basis.

NEXT: Vatican: Laity have role, but most parishes must be led by priests