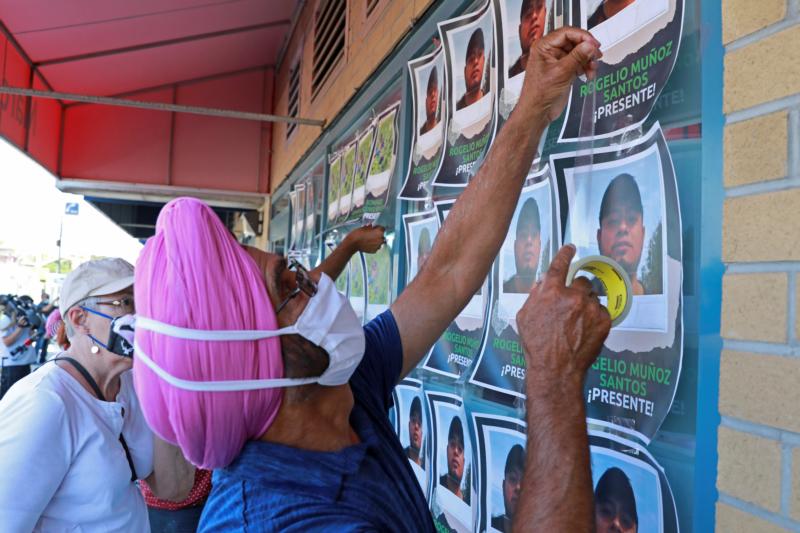 Canadian refugee supporters tape photographs of migrant worker Rogelio Munoz Santos, who died from coronavirus, during a pro-immigration rally by migrants, refugees and undocumented workers outside the office of Canadian Immigration Minister Marco Mendicino in Toronto July 4, 2020. A federal court in Canada ruled July 22 that the Safe Third Country Agreement, which allows Canada to send certain refugee petitioners back to the United States, is unconstitutional. (CNS photo/Chris Helgren, Reuters)

TORONTO (CNS) — Canada’s Federal Court has ruled the country’s Safe Third Country Agreement with the United States violates the Charter of Rights and Freedoms by sending refugees who arrive at Canada’s land borders back to detention in the United States.

It is the second time a federal judge has struck down the Canada-U.S. Safe Third Country Agreement on constitutional grounds.

“If we’re going to be saying that we are Christians, that we believe in what Christ tells us, then we have to believe in welcoming the stranger,” Piche said. “The stranger is the refugee claimant, the person who is fleeing persecution. If we are truly, bona fide Christians, we will stand up for these people.”

“We can continue being Canada — a fair country and a country that protects refugees,” said Loly Rico, co-director of the FCJ Refugee Centre, a shelter sponsored by the Faithful Companions of Jesus.

The case was brought in 2017 on behalf of three women by the Canadian Council of Churches, Amnesty International Canada and the Canadian Council for Refugees. It was largely a reprise of a challenge the same parties brought to court a decade earlier. In 2007, a federal judge struck down the agreement on constitutional grounds, only to have the decision later overturned by an appeals court that ruled the three organizations did not have standing to argue on behalf of refugees before the court.

In the 2007 ruling against the Safe Third Country Agreement, Justice Michael Phelan found it is unreasonable to conclude that the U.S. complies with its obligations under the 1951 U.N. Convention on Refugees and the Convention against Torture.

In the July 22 ruling, Justice Ann Marie McDonald found “the evidence clearly demonstrates that those returned to the U.S. by Canadian officials are detained as a penalty.”

Both judges ruled that the Safe Third Country Agreement violates section seven of the Charter of Rights and Freedoms, which guarantees “life, liberty and security of the person.”

McDonald gave the government six months to either appeal her decision or exit the agreement with the U.S.

“I think we can expect that it will be appealed,” Peter Noteboom, Canadian Council of Churches general secretary, told The Catholic Register, Canadian weekly.

Along with Amnesty International and the Canadian Council for Refugees, Noteboom urged the government not to appeal.

Canada’s churches have been fighting the Safe Third Country Agreement since it was first agreed in 2002 and entered into force in 2004. Fighting for a fair and open welcome for refugees is not something churches can back away from, Noteboom said.

“It’s not something extra. It’s not some sort of marginal or external thing to churches and faith communities in Canada. It’s part of how they see themselves,” he said. “For decades already, the whole initiative, the whole movement of caring for refugees, of working with refugees and immigrants coming to Canada has been in the genetic code of faith communities and churches.”

“It’s a human rights judgment against the United States for its asylum policy by a credible allied nation,” she told The Catholic Register. “It’s tremendously significant. It will get cited in litigation (in the U.S.) I’m sure and in policy documents. … If there’s a (Joe) Biden administration that takes office at the end of January, it will make a difference that a Canadian court so held.”

While the case was before the court in Canada, conditions in U.S. immigration detention centers have gotten worse, said Anker, who was an expert witness in the case.

“Conditions in detention are dangerous now because of COVID-19, more dangerous,” she said.

Even if many of the issues and individual cases at issue in the decision predate the Trump administration, the ruling highlights the deterioration of the U.S. refugee system in the last three years, said lawyer Don Kerwin, executive director of the Scalabrini Fathers’ Center for Migration Studies in New York.

“The United States has an administration in place right now that is doing its level best to eviscerate the U.S. asylum system,” Kerwin said. “It’s part of a broader effort to decimate all U.S. refugee protection programs.”

“What the Canadian court is pointing out is how badly the United States now treats refugees and asylum-seekers, and how precipitously it has fallen in terms of its response to people in great need,” he said.

NEXT: Catholic-supported co-op in Israel helps asylum-seekers during pandemic