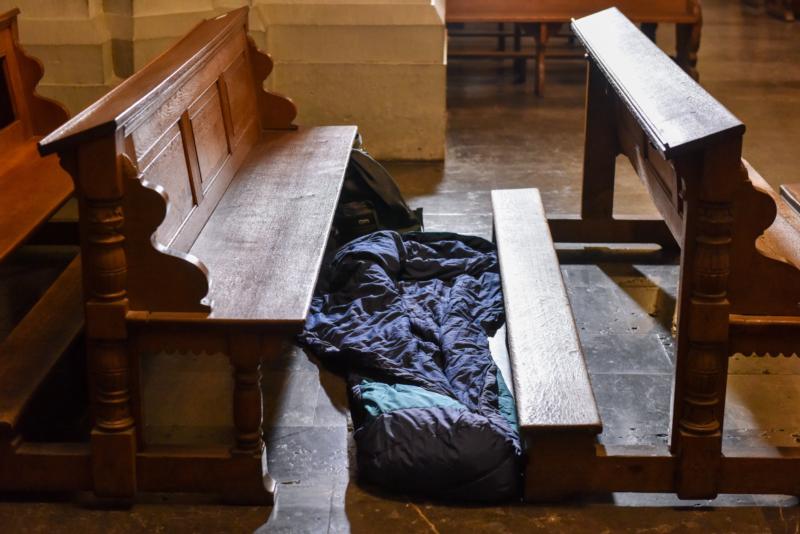 A sleeping bag is seen lying between two pews in a German church in this 2017 photo. A Benedictine abbess who granted refuge to female asylum-seekers in Germany faces trial for refusing to pay a fine. (CNS photo/Harald Oppitz, KNA)

It could become a landmark case by determining whether granting church asylum amounts to the punishable offense of “aiding and abetting illegal residents,” as state prosecutors often interpret it. There is no supreme court ruling on this issue yet, KNA reported.

Mother Mechthild Thurmer granted refuge to female asylum-seekers in her monastery in the Bavarian town of Kirchschletten more than 30 times. The main hearing at the Bamberg district court was canceled in mid-July because the judge wanted to wait for a possible further charges against her, a court spokesman told KNA.

“I acted out of Christian spirit,” the 62-year-old abbess said. “To give concrete help to a person in need can’t be a crime.”

Up to now, authorities in Bavaria have mostly dropped proceedings against people granting church asylum and imposed no penalties. In a few cases, they offered to close cases in exchange for a fine. If the accused agreed, the matter was over, although this did not amount to an acquittal.

Franz Bethauser, the lawyer for Mother Mechthild, has long been hoping for a fundamental clarification of the issue by the justice system in order to give people legal certainty.

KNA said the hearing in Bamberg would not be just about Mother Mechthild. It’s also about whether the 2015 agreement between the churches and the government on church asylum still stands. Under that agreement, authorities tolerate asylum while the asylum-seeker’s individual application is examined, provided that he or she is not hidden.

The Freising district court ruled in 2018 that as long as the state does not enforce an asylum-seeker’s obligation to leave the country, church asylum cannot be punishable.

Bavarian Interior Minister Joachim Herrmann urged the police and immigration authorities to stick to this line and not to deport refugees directly from church care. But as yet, asylum-seekers and their hosts have no legal claim and hence no final security in the matter.