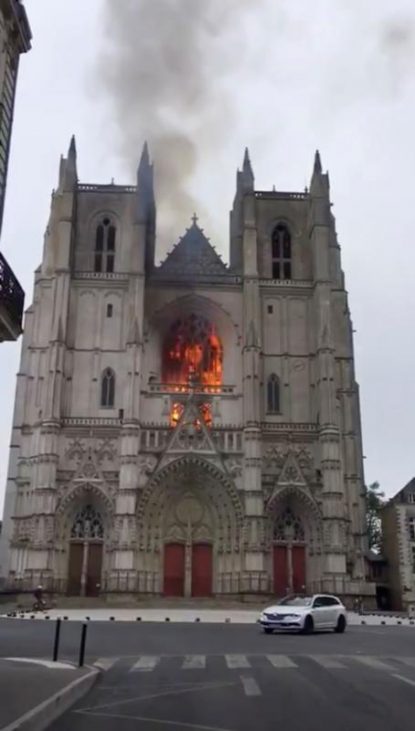 A general view of fire at the Cathedral of SS. Peter and Paul in Nantes, France, is seen July 18, 2020, in this screen grab obtained from a social media video. French police have charged a cathedral volunteer with “destruction and damage by fire” in connection to the blaze. (CNS photo/Ludovic Stang, via Reuters)

NANTES, France (CNS) — A Rwandan is facing up to 10 years in prison after he confessed to deliberately setting fire to the city’s Gothic cathedral.

The man is a Catholic who had been working voluntarily at the cathedral as a warden and had the keys to the building because he was responsible for locking it up on the day of the fire.

He was questioned by police following the blaze and released without charge but rearrested July 25. He confessed to arson later that day.

Nantes prosecutor Pierre Sennes told the Agence France-Presse news agency July 25 that the man has since been charged with “destruction and damage by fire,” an offense that could carry a penalty of up to 10 years in jail and $175,000 in fines.

The prosecutor’s office also revealed that the man came to Nantes several years ago and had applied for refugee status without success, culminating in an order in 2019 for him to leave France.

The cathedral in Nantes is considered to be a jewel of French architecture. It was built between 1434 and 1891 and has been designated a historic monument by the French government because of its architectural significance.

More than 100 firefighters had contained the blaze within two hours of it breaking out, and they stopped it from spreading to the main body of the church.

The choir organ at the west end of the building was destroyed, however, along with much of the choir area and some stained-glass windows.

A July 22 statement issued by Father Francois Renaud, the administrator of the Diocese of Nantes, said the fire had weakened the fabric of the cathedral and that it would be closed for repairs, which could take years to complete.

“Most of the costs will be borne by the state, which owns the building,” he said, adding that the diocese would need to find funds for a new organ and the replacement of the choir stalls.

“The cathedral struck those who entered it with its light and the elevated gaze it elicited. It offered everyone peace conducive to recollection and prayer. We are deprived of our cathedral. But we are not deprived of the light and peace given to us by the Lord of this place. With or without a cathedral, our church will know how to shine, I am sure,” he said.

The blaze came just over a year after a fire severely damaged Notre Dame Cathedral in Paris, though the fire in Nantes was much smaller by comparison. 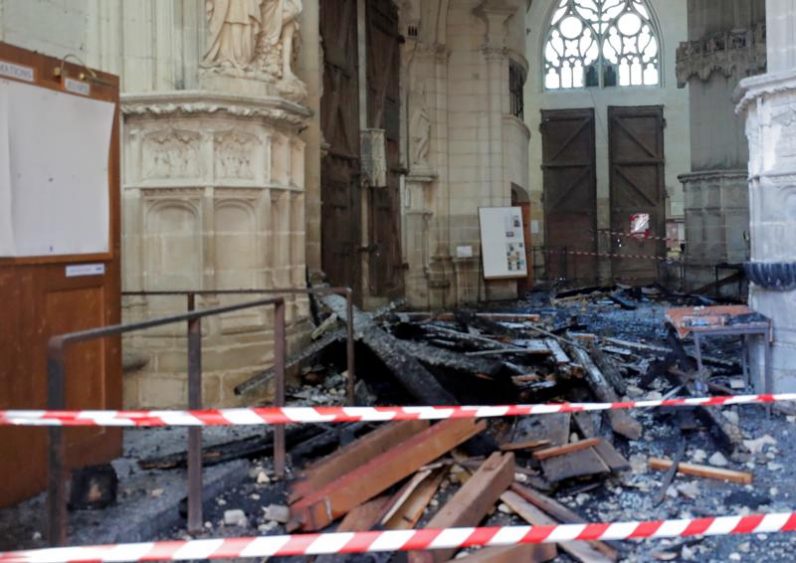 Debris caused by a fire inside the Cathedral of SS. Peter and Paul in Nantes, France, is seen July 19, 2020. French police have charged a cathedral volunteer with “destruction and damage by fire” in connection to the blaze. (CNS photo/Stephane Mahe, Reuters)

NEXT: Justice, dignity not just ‘privilege of the rich,’ Vatican official says