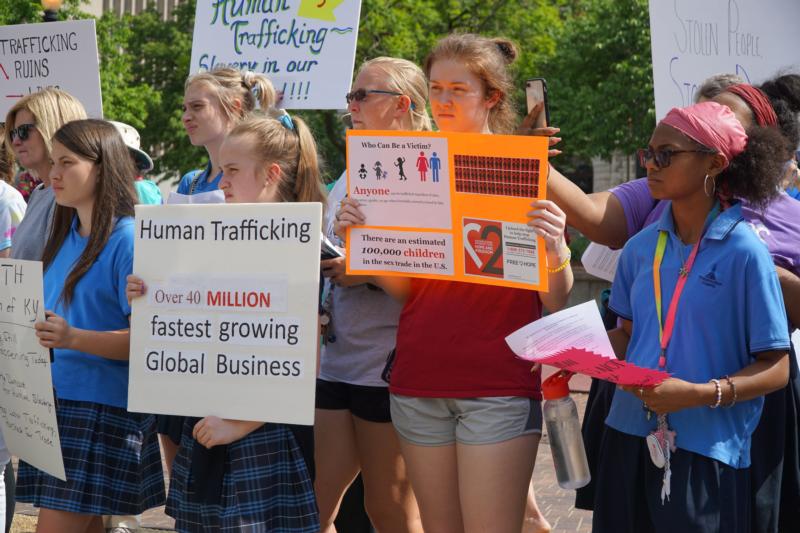 A group including students from Sacred Heart Academy and Presentation Academy in Louisville, Ky., listen to a speaker during the seventh annual prayer service for the victims of human trafficking in 2019 at Jefferson Square Park in downtown Louisville. A Vatican representative said the protection of rights and human dignity is not exclusive to the wealthy but also to the most vulnerable, especially victims of human trafficking. (CNS photo/Ruby Thomas, The Record)

VATICAN CITY (CNS) — Addressing the Organization for Security and Cooperation in Europe, a Vatican representative said the protection of rights and human dignity is not exclusive to the wealthy but also to the most vulnerable, especially victims of human trafficking.

“The common good demands that access to justice, political representation, and the recognition of the dignity of others are not the privilege of the rich, but rather should be accessible especially to the weak and vulnerable,” said Msgr. Joseph Grech, representative of the Vatican’s permanent mission to the international organizations in Vienna.

“All people should enjoy the same universally recognized human rights and fundamental freedoms,” Msgr. Grech told participants of the 20th Alliance Against Trafficking in Persons Conference in Vienna.

The OSCE website said the conference’s theme “acknowledges that while many countries have legislation and action plans to combat human trafficking, impunity remains widespread across the world and in the OSCE region.”

“It is estimated that there are about 25 million victims of human trafficking globally. According to the latest reports, in 2019 only a little more than 11,000 traffickers were prosecuted — roughly one prosecution for every 2,154 victims,” the organization said.

In his address, Msgr. Grech said the numbers should “make us indignant” and that the international community must reflect on whether “we have done everything possible to reduce the discrepancy between the high number of estimated victims and the low numbers of court proceedings and convictions.”

He also highlighted the lack of adequate funding for criminal justice systems that, consequently, increases “the risk of criminals continuing their heinous work.”

“Alternatively, result-oriented efforts are disproportionately channeled to pursue small-time operations and criminals rather than ‘big fish,’ which — despite requiring more time and resources — could instead make a significant difference. This certainly leads, once again, to impunity for the traffickers.”

Recalling Pope Francis’ words on the vulnerability of people who are “defenseless before the interests of a deified market,” Msgr. Grech said the unequal distribution of goods is among several ways that “most people around the world experience a contrast between the rights they are guaranteed by the law and the way they are treated.”

“The principle of profit maximization, isolated from all other considerations, leads to a model of exclusion that violently inflicts on those who suffer its social and economic costs in the present, while condemning future generations to pay for its environmental costs,” he said.

The coronavirus pandemic “has been a severe and unpredictable challenge for the whole world,” especially for human trafficking victims who have no way of escaping, Msgr. Grech said, and he urged the international community to continue working to protect the rights and dignity of the most vulnerable.

“In this current situation, countries need to keep shelters and hotlines open, safeguard access to justice and prevent more people in vulnerable situations from falling into the hands of organized crime,” he said.

NEXT: Mexican bishops call for action ahead of Supreme Court abortion ruling