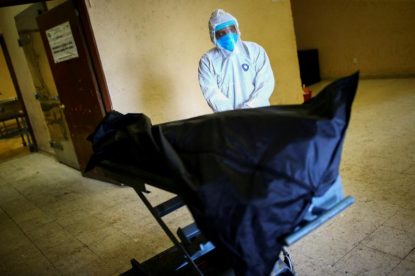 The body of a man, who died from the COVID 19, lies on a stretcher at San Isidro crematory in Mexico City June 29, 2020. (CNS photo/Edgard Garrido, Reuters)

MEXICO CITY (CNS) — Mexico’s bishops have expressed alarm over the scope of the COVID-19 crisis, which they say is continuing to expand across the country even as health authorities allow the gradual resumption of economic activity.

The bishops also called for a more robust government response to the pandemic — both on the health and economic fronts — saying health officials have a “moral obligation” to “provide certainty to people when they find themselves confused,” and that millions of families whose wage-earners were thrown out of work are facing the prospect of falling into poverty.

“It’s necessary that the civil authorities make all possible efforts to provide solid and transparent information, along with the number of deaths (the pandemic) causes. Hence, it would be opportune that testing be widespread, constant and expeditious,” the statement continued, referring to Mexico’s low rate of COVID-19 testing, among the lowest in the hemisphere.

Journalists’ investigations have indicated deaths from COVID-19 are being undercounted.

The bishops’ statement comes as Mexico confronts questions over its COVID-19 strategy and an economic crisis, which has cost it an estimated 12 million jobs. The pandemic is expected to push the poverty rate to 60% of the population, according to the bishops’ statement.

Mexico has recorded more than 220,000 COVID-19 cases and more than 27,100 deaths as of June 29, according to the Heath Secretariat. Its COVID-19 death toll ranks seventh among nations and is expected to soon surpass Spain and France, both of which were hit hard by the coronavirus, but have recovered somewhat.

Mexico’s COVID-19 strategy has been somewhat of an outlier, according to health experts, who say the country has pursued a policy of testing only the sickest of patients and depending on disease modeling to guide its response. The country performs just 3.3 tests per 1,000 people — 25 times less than the United States as of June 23, according to Our World In Data.

The country’s models have produced erroneous predictions. Dr. Hugo Lopez-Gatell, coronavirus czar, said the pandemic’s peak would arrive around May 8 and the death toll would top out at 6,000.

The president has responded with cuts to government, loans of roughly $1,000 to the smallest of businesses and the pushing ahead of payments for social program recipients. He rejected big business bailouts, saying such solutions only benefited the rich in past crises, and has refused to defer tax payments.

Lopez Obrador also has lauded families, who traditionally provide a social safety net for members in times of crisis.

“(In) Mexico, by tradition, women care for the parents,” Lopez Obrador said June 25. “With respect to other countries, it’s helped us enormously that Mexican families have the custom of being very fraternal, very supportive, taking care of the elderly.”

The bishops also recognized the importance of families in riding out the pandemic, but they said families are lacking resources, and the incidence of family violence during quarantine has been soaring.

“Families deserve to be recognized, not only as the basic cell of society, but also as an institution that compensates for the shortcomings in health care that we have as a country,” the bishops said. “(This) doesn’t mean we stop trying to overcome these shortcomings with appropriate public policies.”

With unemployment reaching record levels and businesses closing, the bishops called for “solidarity and putting in what little we have.” But they also urged lawmakers “to propose better solutions and incentives” for the country’s productive sectors.

“Neglecting those who generate jobs will not bring any positive results in the medium and long term,” the bishops said.