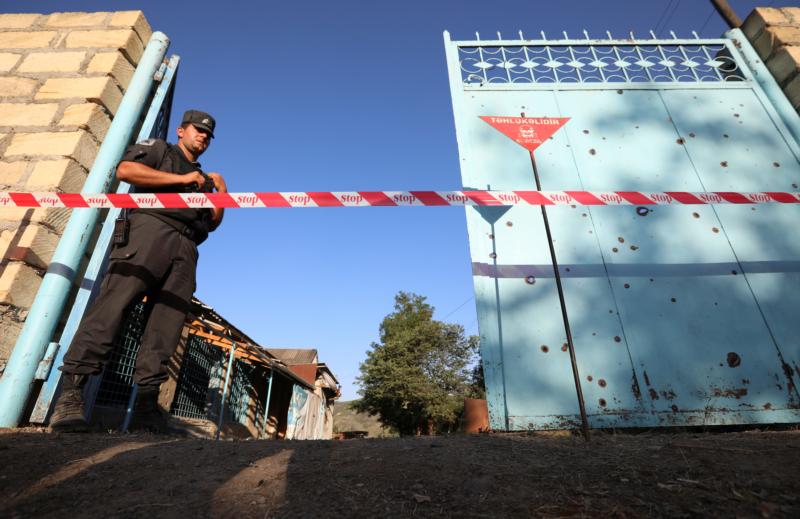 A law enforcement officer guards a yard with unexploded shells next to a house in Agdam, Azerbaijan, July 15, 2020. Pope Francis expressed his concerns about increased tensions at the Armenia-Azerbaijan border during his Angelus prayer at the Vatican July 19. (CNS photo/Aziz Karimov, Reuters)

After praying with pilgrims gathered in St. Peter’s Square for his Sunday Angelus address July 19, the pope offered prayers for all suffering from COVID-19, as well as those suffering from economic repercussions “and situations of conflict.”

“In particular, I am following and am concerned about the renewed armed tensions in the past few days in the Caucasus region between Armenia and Azerbaijan,” he said.

The conflict stems from the long-disputed Nagorno-Karabakh region. After the fall of the Soviet Union, the region, which has an Armenian ethnic majority, proclaimed itself as an independent state, leading to a conflict between Armenia and Azerbaijan from 1988 to 1994.

According to a July 18 report by the Reuters news agency, 15 servicemen from Azerbaijan and Armenia, as well as an Azerbaijani civilian were killed since July 12 in skirmishes near the border. Both sides have blamed each other for violating cease-fire agreements.

The pope’s words echoed similar concerns made by U.N. Secretary General Antonio Guterres, who called for “an immediate end to the fighting and (for) all involved to take immediate steps to de-escalate the situation and refrain from provocative rhetoric.”

He also expressed his support for efforts “to address this dangerous situation and search for a peaceful, negotiated settlement to the long-standing Nagorno-Karabakh conflict.”

Pope Francis also renewed his call for a global cease-fire, a resolution that was adopted by the U.N. Security Council July 1 in the wake of the coronavirus pandemic.

“On the basis of a recent United Nations resolution, I renew the appeal for a global and immediate cease-fire that would allow the peace and safety that are indispensable in order to provide the necessary humanitarian assistance,” the pope said.

“While I assure my prayers to the families of those who have lost their lives during the clashes, I hope that, with the dedication of the international community, and through dialogue and good will, there may be a lasting peaceful solution for the good of those beloved peoples,” he said.

PREVIOUS: Vatican: Laity have role, but most parishes must be led by priests

NEXT: Stalling action on debt relief at G-20 meeting was sinful, advocate says