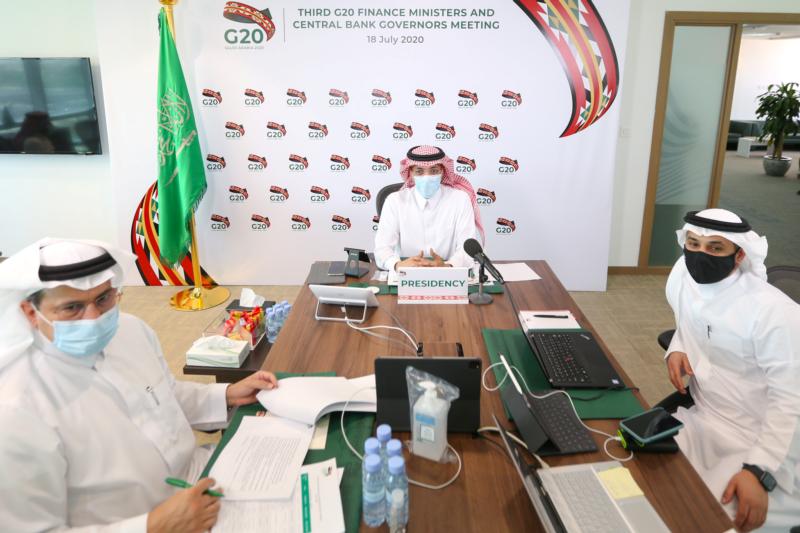 Mohammed al-Jadaan, Saudi Arabia's minister of finance, wears a protective mask as he attends a virtual meeting of G-20 finance ministers and central bank governors July 18, 2020. Advocates say they are disappointed the G-20 meeting did not yield as much help for desperately poor nations struggling during the COVID-19 pandemic as hoped for, and they are urging Catholics to take action now to ensure international finance leaders make the needed decisions in the fall. (CNS photo/G-20 Saudi Arabia via Reuters)

ROME (CNS) — Advocates had hoped finance officials from the world’s wealthiest nations would have done more to help desperately poor nations further struggling during the COVID-19 pandemic, but the virtual meeting left many debt-related issues unresolved.

Finance ministers and central bank governors from the G-20, the group of the 20 major economies in the world, met virtually July 18 for ways to boost the global economy and confront the global pandemic and its impact.

“We had hoped the debt payment suspension for the world’s poorest countries would be continued into 2021 given the severity of the crisis,” he added.

Instead, participants at the virtual meeting decided those issues would get looked at during a series of meetings in the fall — with the International Monetary Fund and World Bank in October and another G-20 meeting in November.

“For them to kick the decision to the fall or to the end of the year is sinful” when it is clear millions of people are suffering and even dying as a result of this global health and economic crisis, LeCompte told Catholic News Service in an online interview July 20.

“We’re incredibly disappointed that they did not even meet our minimal expectations,” he added.

Some of those expectations had been spelled out in a letter Jubilee USA organized in the spring; it had received more than 200 signatories from major organizations and faith-based communities ahead of the G-20 meeting.

Addressed to the G-20, the International Monetary Fund and U.S. President Donald Trump, the letters called for expanded debt relief and debt cancellation for developing countries; more aid for countries; new processes to prevent market and financial crises; and measures that confront tax evasion and corruption.

Jubilee USA had “achieved a lot” back in April when “we won debt cancellation for the 25 poorest countries for six months” and the G-20 approved a plan for 73 developing countries to suspend debt payments to G-20 countries, LeCompte said.

“It wasn’t enough, but it was a start and incredibly important,” he added.

Advocates had hoped the G-20 meeting would continue debt payment suspensions into 2021 instead of being stalled for discussion at meetings in the fall, he said.

The other important initiative that needed action was providing access to the global reserve funds, he said.

“This is the most important decision facing the G-20 right now because that has the ability, not only to get money to every country that needs it around the world, but to actually (help) countries emerge with some resilience from this crisis,” LeCompte said.

The global reserve funds activated $250 billion in 2008 after the financial crisis led to the permanent loss of about 22 million jobs around the world, he said.

The International Labor Organization estimates this current crisis will permanently “destroy” 400 million jobs, necessitating an infusion of trillions of dollars from the fund, he said.

So while the mid-July meeting was disappointing, LeCompte said, Catholics can take action now to ensure international finance leaders make the needed decisions in the fall.

Parishes and congregations can join with other faith-based communities in signing the G-20/IMF petition at jubileeusa.org, and U.S. citizens can urge their government representatives to support debt relief initiatives that still have to be ratified, he said.

LeCompte said Catholics can also become more informed about why debt relief and other economic issues are an important part of Catholic teaching; take part in Jubilee Weekend on the local level in the fall; and thank their bishop for their leadership.

“Catholic bishops all over the world have been the primary religious leaders acting on these issues,” he said.

Pope Francis has called for forgiveness, or at least a reduction, of the foreign debt of the world’s poorest nations.

The pope also has established a COVID-19 response commission in the Dicastery for Promoting Integral Human Development to examine the challenges the world is facing in battling the pandemic and what it will inevitably face in its aftermath.

Among its tasks, the commission is reviewing debt of the world’s poorest countries, joining the plea of Pope Francis and a wide variety of leaders in calling for debt relief — either through the suspension of payments or an outright forgiveness of debt.

NEXT: Pope makes surprise visit to summer camp for kids of Vatican employees